The U.N. envoy also cited reports of unconfirmed deaths, injuries, and damage to houses and civilian property in the town of Mindat in western Chin state, where the junta declared martial law because of armed resistance to military rule. 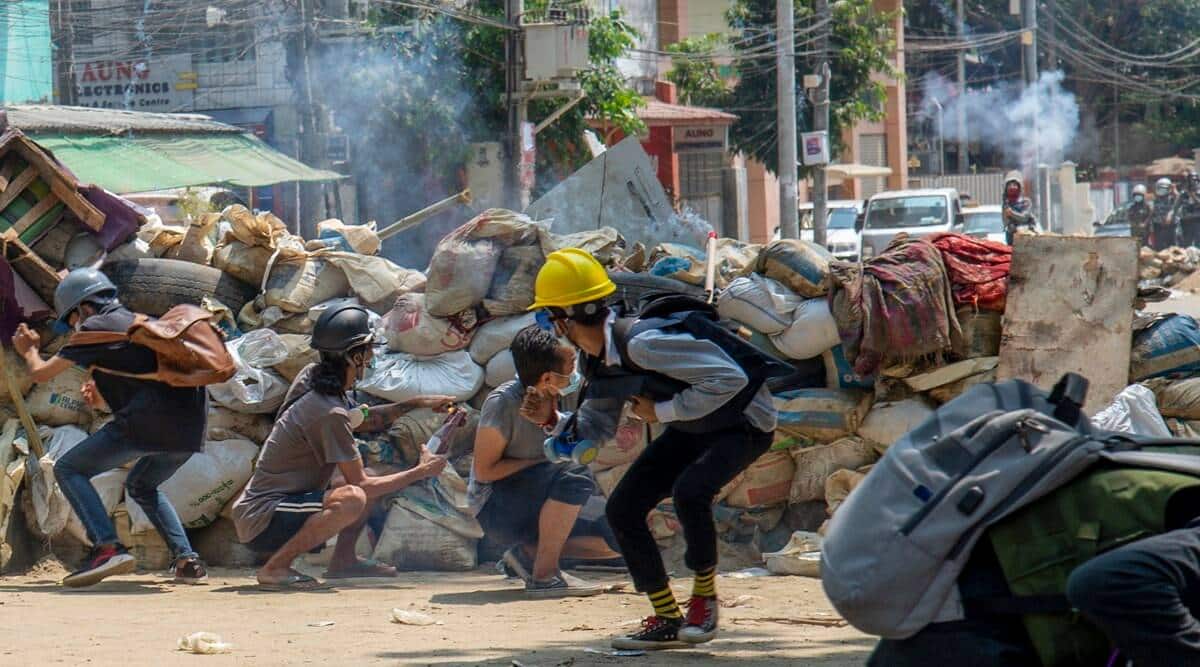 The U.N. special envoy for Myanmar warned Monday of possible civil war in the country, saying people are arming themselves against the military junta and protesters have started shifting from defensive to offensive actions, using homemade weapons and training from some ethnic armed groups.

Chrisrine Schraner Burgener told a virtual U.N. news conference that people are starting self-defense actions because they are frustrated and fear attacks by the military, which carried out a coup on Feb. 1 against the democratically elected government, and is using “a huge scale of violence.”

A civil war “could happen,” she said, and that’s why for the past three weeks from her base now in Thailand she has discussed with many key parties the idea of starting an inclusive dialogue that would include ethnic armed groups, political parties, civil society, strike committees and the army, known as the Tatmadaw, as well as a small group of witnesses from the international community.

“Clearly it will not be easy to convince especially both sides to come to a table, but I offer my good offices … to avoid more bloodshed and civil war which would last a long time,” Schraner Burgener said. “We are worried about the situation and clearly we want that people on the ground … decide how they want to see the country going back to normal.”

Calling the situation in Myanmar “very bad,” she pointed to more than 800 people killed, over 5,300 arrested, and more than 1,800 arrest warrants issued by the military.

The U.N. envoy also cited reports of unconfirmed deaths, injuries, and damage to houses and civilian property in the town of Mindat in western Chin state, where the junta declared martial law because of armed resistance to military rule. She also pointed to new reports of increased violence in Kayah state — also known as Karenni state — in eastern Myanmar and in southern Shan state.

Myanmar for five decades had languished under strict military rule that led to international isolation and sanctions. As the generals loosened their grip, culminating in Aung San Suu Kyi’s rise to leadership in 2015 elections, the international community responded by lifting most sanctions and pouring investment into the country. The coup took place following November elections, which Suu Kyi’s party won overwhelmingly and the military contests as fraudulent.

Suu Kyi appeared in court in person for the first time since the coup on Monday on a variety of charges, amid threats by the military to disband her National League for Democracy party which won 82% of the vote in November’s election. Her lawyer, Min Min Soe, said Suu Kyi wanted to tell Myanmar’s people that the party was founded for them, and “the NLD will exist as long as the people exist.”

Schraner Burgener called the military’s attempt to ban the NLD “unacceptable” and said, “I also hope the NLD will survive because this is the will of the people.”

The U.N. envoy had an hour-long meeting with the junta’s military commander, Senior Gen. Min Aung Hlaing, on the sidelines of a meeting last month of the 10-member Association of Southeast Asian Nations, known as ASEAN, which includes Myanmar. ASEAN issued a five-point action plan that calls for stopping violence, constructive dialogue, appointment of an ASEAN special envoy as mediator, humanitarian aid and the mediator’s visit to Myanmar.

But Schraner Burgener said a day later general Hlaing said he would consider the five points when the situation in Myanmar is stable. And on Sunday he reportedly said in an interview with Chinese television “that he doesn’t see those five points can be implemented.”

“So clearly it’s up to ASEAN how to react,” she said. “Clearly, we should be aware that time is ticking and we have not a lot of time to see action on the ground, because time will just play in the hands of the military junta.”

Schraner Burgener said the Tatmadaw declared on Sunday that it had changed the rules for the retirement age of the commander-in-chief which means Hlaing “could stay for life in this position.”

After her meeting with general Hlaing, which they agreed to keep private, the U.N. envoy asked to go to Myanmar to continue the discussion, but she said he replied “still it’s not the right time.” She said she isn’t giving up her efforts because she believes people would probably be encouraged by her presence. She still has an office in the capital, Naypyitaw, and said she receives daily reports from many people in the country.

Schraner Burgener has been holding talks with regional leaders and individuals and groups in Myanmar. She said she is flying to Japan on Tuesday to meet the foreign minister. She said she is also ready to talk to Chinese officials.

Schraner Burgener stressed that the U.N. is trying to stop the violence, which started with the military coup.

“Clearly it’s sad to see that people have to use arms,” she said.

Local citizens have formed a so-called People’s Defense Force with the National Unity Government, which “must try and bring them under a single command structure,” Schraner Burgener said, and protesters are shifting to offensive actions. Every day, she added, “explosions” happen anywhere, which is scaring the people.

Schraner Burgener said ethnic armed groups told her in meetings that they support the people and now have “a common enemy,” but she said it’s difficult to see how their mainly home-made weapons can go up against “a very strong army who have a lot of lethal weapons.”