In 1996, when the Taliban first took over Afghanistan, Pakistan was the first country in the world to recognise their government. 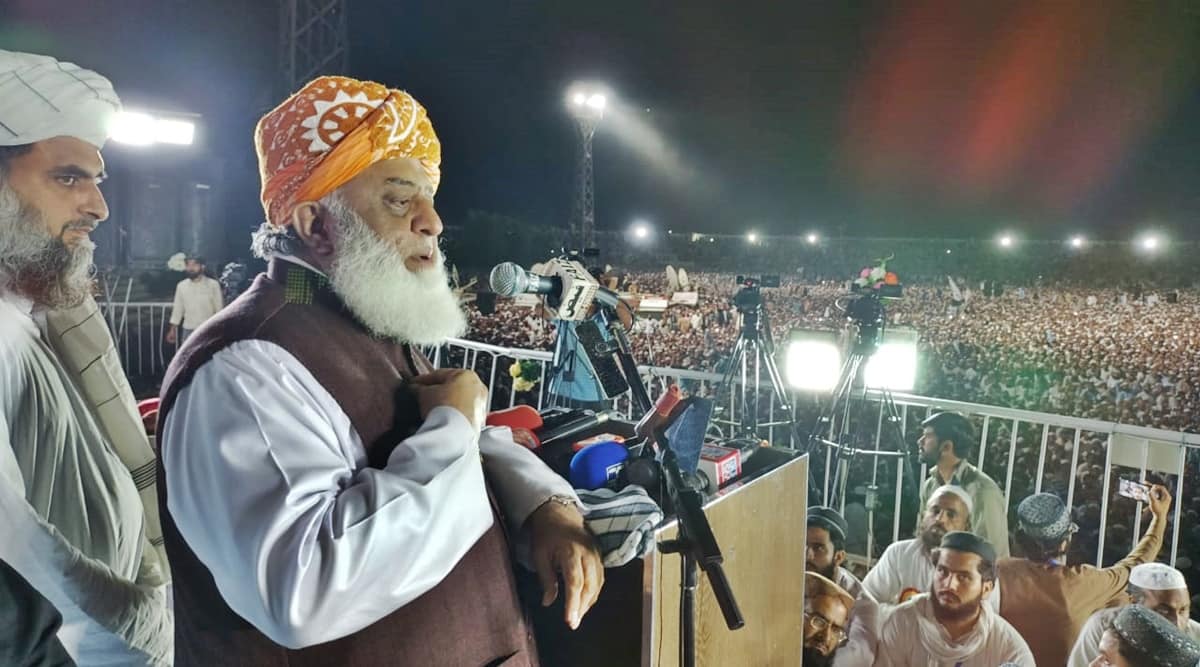 Powerful Islamist factions in Pakistani politics are putting pressure on the government to officially recognise the Taliban government in Afghanistan.

Rehman is one of Pakistan’s most powerful clerics, and also heads the country’s largest alliance of opposition parties, the Pakistan Democratic Movement.

He has a massive following in Pakistan and wields considerable influence in the country’s religious and political circles.

Out of 36,000 Pakistani Islamic religious seminaries, over 18,000 belong to the strict Deobandi school of thought, which emphasises adherence to Islamic law.

The Afghan Taliban, and Rehman, both follow Deobandi ideology, and Taliban officials and foot soldiers alike have studied in these seminaries, some of which are said to be under the control of JUI affiliates.

Although the Taliban have been courting governments around the world for international recognition of its “Islamic Emirate” in Afghanistan, no country officially recognises their rule.

Several members of the Taliban’s leadership are also on international terrorist lists.

After the Taliban took control of Afghanistan, reports have piled up of public executions, a violent crackdown on media, suppression of women, banning girls from schools, and violating the rights of ethnic minorities.

Islamic hardliners in Pakistan say they support the Taliban’s application of Shariah law in running Afghanistan.

The JUI believes that recognition of the Taliban is in Pakistan’s national interest.

Jalal Uddin, an aide to Rehman, told DW that the Taliban is a “Pakistan friendly” government, and that recognition from Islamabad will further strengthen ties between the two Muslim-majority countries.

Even if many critical in voices in Pakistan believe that the Taliban have come into power through force, and consider their government illegitimate, religious groups in Pakistan are pushing back.

The right-wing religious groups say liberal Pakistanis have launched a campaign against the Afghan Taliban.

Hafiz Ihtesham from the Martyrs Foundation, an Islamist organisation affiliated with Islamabad’s Red Mosque, claimed that the 2001 US-NATO invasion deposed the Taliban as legitimate rulers of Afghanistan and that now their rule has been “restored.”

“We think Pakistan is a sovereign and independent country and it should ignore western pressure and recognise this government,” he told DW.

Ihtesham added his organisation was considering approaching the government with a request to recognise the Taliban.

“We will also make this demand in parliament,” he told DW, adding that the party is also launching mobilisation for this purpose.

Will Pakistan recognise the Taliban?

In 1996, when the Taliban first took over Afghanistan, Pakistan was the first country in the world to recognise their government. The Taliban ruled the country with an iron first, handing down inhuman punishments and putting severe restrictions on women.

This time around, experts believe Pakistan cannot afford to infuriate the West by recognising the Islamists.

Islamabad is dealing with a faltering economy, dependent on international monetary institutions for help, and is over $100 billion in debt.

Husain Haqqani, South and Central Asia director at Hudson Institute, a think tank in Washington, said that Pakistan will likely see how other countries respond before making a decision.

He told DW Islamabad would be isolated, as it was in the 1990s, if it rushes into recognising the Taliban while the rest of the world condemns their rule.

Haqqani added that Islamabad should ignore the pressure coming from right-wing religious parties.

However, a Pakistani lawmaker with the ruling party Pakistan Tehreek-e-Insaf (PTI) rejected the notion it has not recognised the Afghan Taliban because of US pressure.

“We have very cordial ties with the Kabul government and want to recognise them in consultation with China, Russia and other regional states,” he said.

Pakistan’s secular political parties have been appalled over the Taliban’s treatment of women and minorities. They vehemently oppose any formal recognition of the Taliban.

“I am a democrat and I believe in a government that comes into power through democratic process,” said Taj Haider, a veteran leader of the Pakistan People’s Party.

He told DW the Taliban takeover was non-democratic and that their rigid interpretation of Islam is against fundamental human rights.

“There is no reason to recognise that government,” he said.

Women’s rights groups assert that if Islamabad recognises the Taliban regime, it will embolden retrogressive forces in Pakistan and the region.

“No recognition should be accorded to them unless they decide to hold fair and free elections, lifting all restrictions on women and accepting all international covenants on human rights,” she said.