Like hundreds of men in the Gaza Strip, al-Garosha regularly returns to jail for failing to repay a wedding loan. 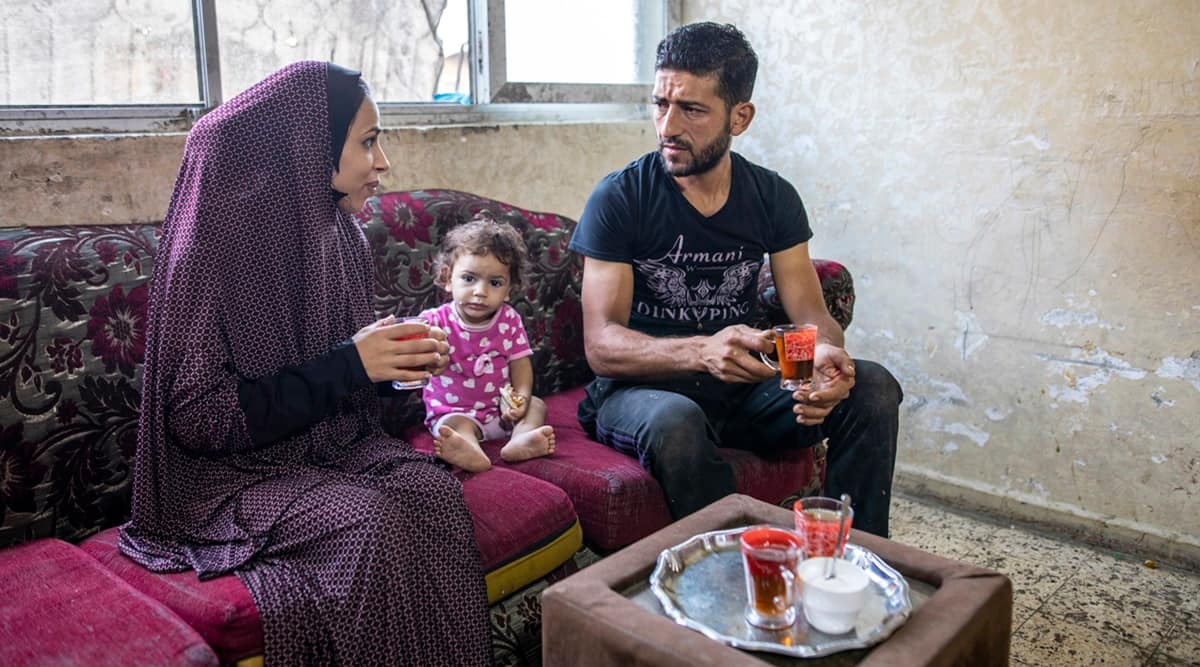 When Wasfi al-Garosha returned to jail, shortly after sunrise one September morning in Gaza City, his daughter did not cry and his brother was still asleep.

Al-Garosha, a 29-year-old plasterer, began the walk back to jail as his niece and nephew were preparing their bags for school. His wife and mother were making tea. And his father — unemployed, like nearly half of Gaza — was only just waking up.

This was al-Garosha’s 17th stint in detention since the start of 2020, or possibly his 18th. He had lost count, and the Gaza authorities have no exact records. Al-Garosha took out a loan to pay for his wedding in 2019, and now regularly endures stints in a police jail because, unemployed like his father and brother, he cannot repay the debt. “It has become normal now,” said al-Garosha, as he emerged from his apartment. “Just a normal part of my life.”

And so it is for many in Gaza City.

Debt — and particularly wedding-related debt — has become emblematic of the economic crisis here. In the first nine months of 2021 alone, the Gaza City police issued 448 arrest warrants for indebted bridegrooms — already more than the cumulative total recorded in the city throughout 2017, 2018 and 2019. The figures for 2020 were not available.

Since Hamas took power in Gaza in 2007, Israel and Egypt have heightened pressure on the militant group by enforcing a blockade on the strip. That has helped damage the Gazan economy and is one of the major causes of an unemployment rate of more than 40%. For young Gazans, one result of this is that they often cannot afford a wedding ceremony.

But for many, a large wedding is an important rite of passage. Unwilling to delay marriage — in a conservative society, the only accepted route to sexual intimacy — young men take out wedding loans, often worth about $2,000, or nearly an average annual salary in Gaza. 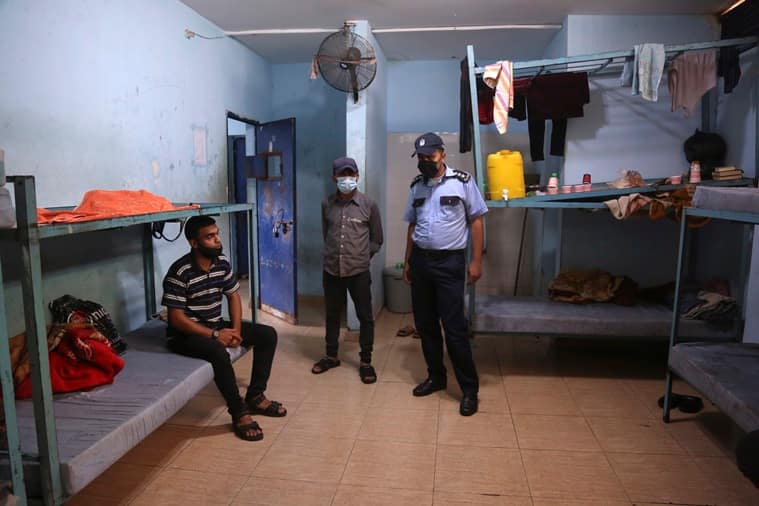 If, like al-Garosha, they fail to repay it, they usually end up in jail, the result of a 2015 law, which makes it even harder for them to reduce their debt.

On the September morning when he returned to jail, al-Garosha stepped out onto his landing, still holding his 1-year-old daughter, Dina. She was born after he started his cycle of jail terms, and he has been only an intermittent presence in her life. Al-Garosha gave Dina one last kiss, before handing her back to his 20-year-old wife, Samar.

Reaching the street, he settled into a brisk stride. He walked past the tire merchant opening up his shop, past the patch of empty ground where a missile struck during a brief war last May, past a line of scuffling schoolchildren waiting to buy snacks from a refreshments stall.

It was at a similar street stall that al-Garosha had first met Samar, one afternoon in 2017. Al-Garosha ran the stall with a friend, selling tea and coffee. One day, the friend’s sister turned up, and al-Garosha chatted briefly with her. It was Samar, then 16.

They spoke for only a few minutes, and he was in no financial position to support a spouse. But al-Garosha felt a connection and, perhaps as importantly, felt he was running out of time to get married.

Many Gazans marry in their late teens, and he was already 25. Since most Gaza marriages are still arranged through a bride’s parents, he called Samar’s father to ask permission to marry her. They were engaged four days later. 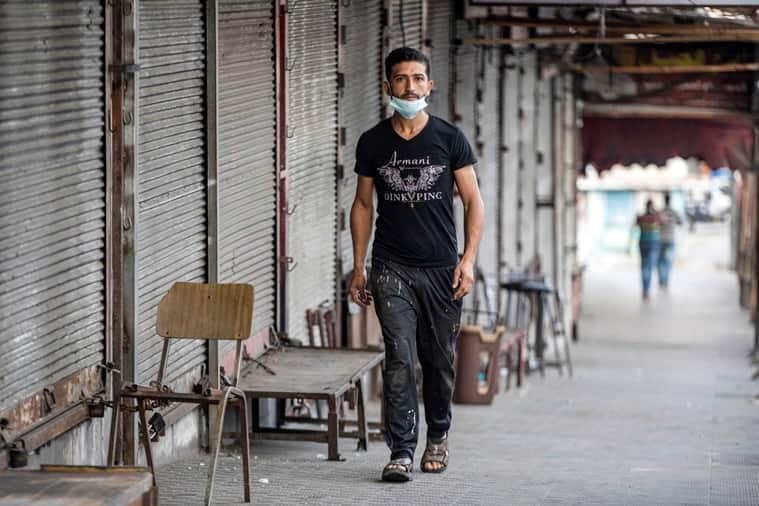 After passing the scuffling children, al-Garosha quickened his pace. The jailers expected him before 8 a.m.

To his left was a shuttered cinema — abandoned, like almost all cinemas in Gaza, since the late 1980s, when the combination of a Palestinian uprising and rising Islamist extremism forced cinema owners to close their businesses.

To his right was a wall covered with paintings of al-Aqsa Mosque in Jerusalem. Stuck in Gaza since the blockade began, al-Garosha, like most Gazans, had never seen the mosque in person.

A single Israeli shekel — legal tender in Gaza — lay glinting in the dirt outside a school, not far from a dead cat. He stooped to pocket the coin, worth a little more than a U.S. quarter, half-smiling, half-shrugging. Just 5,569 shekels to go to clear his debt.

Al-Garosha first fell into debt as soon as he and Samar were engaged. Like most Gazan grooms, he needed to pay a bride price, in his case about $3,500, to the bride’s parents. To raise the money, he sold his phone, laptop and furniture — as well as his drink cart, depriving himself of a revenue stream.

Then, 17 months later, came the costs of the wedding. Poor as he was, al-Garosha did not want to stint on a rare chance to prove his social standing to his friends and family. So he hired a wedding hall for 70 guests, a motorcade, an outdoor stage and several loudspeakers — and bought the furniture required for his new marital bedroom. 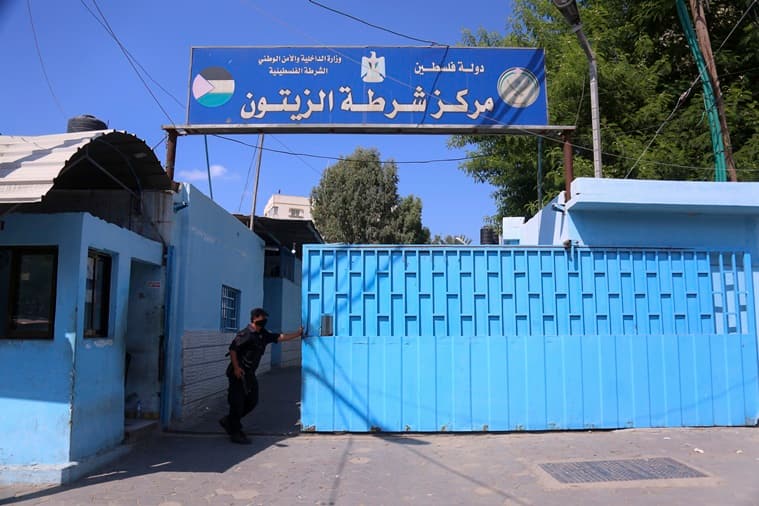 Altogether, that came to 7,500 shekels (about $2,375). To pay for it, he took a loan from Accord, a firm originally founded to finance wedding expenses, but which now focuses on more profitable markets.

“There are so many grooms losing their jobs,” said Accord’s owner, Louay Ahmed. “There’s a higher risk in lending money.”

For four months, al-Garosha managed to make his monthly repayments, relying on irregular work as a plasterer. But by the summer of 2019, he fell behind, leading the loan company to begin legal proceedings. In October 2019, just five months after Dina’s birth, he started the first of six three-week jail terms, beginning a rolling cycle of freedom and incarceration. He faces more jail time if the debt is not repaid.

Each three-week term is usually broken into three parts: He is allowed to return home most weekends.

As he got closer to the jail that September morning, al-Garosha strode past a monument commemorating a Hamas attack on Israeli soldiers — a giant fist punching its way through a replica of an Israeli armored vehicle. Then he passed under a huge banner honoring Hamas. 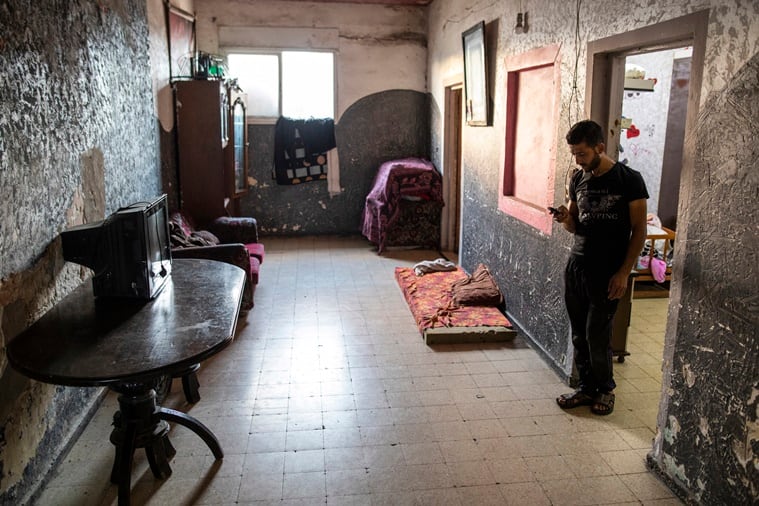 Seeing the banner, al-Garosha shook his head. He respected Hamas’ military campaigns against Israel, he said, but its domestic approach angered him. In his view, the group funnels money, jobs and social support to its members, leaving people like him to fend for themselves financially.

He pressed on up Omar Mukhtar Street, one of the city’s main thoroughfares, passing several clothing stores yet to open for the day.

Given the choice, Samar al-Garosha said she would work in a shop like this — keen to help her husband repay the debt. But her husband refuses to let her. He considers it dishonorable for his wife to work alongside men.

Spotting a street vendor, Wasfi al-Garosha stopped to buy two cigarettes, for a shekel each, with a 5-shekel coin his mother had given him. What was another two shekels, he said, when he owed thousands?

He turned onto a side street. The detention center was in sight, and another jail term was about to begin. Inside, a cramped cell awaited him, often filled with 40 men, usually charged with minor crimes. 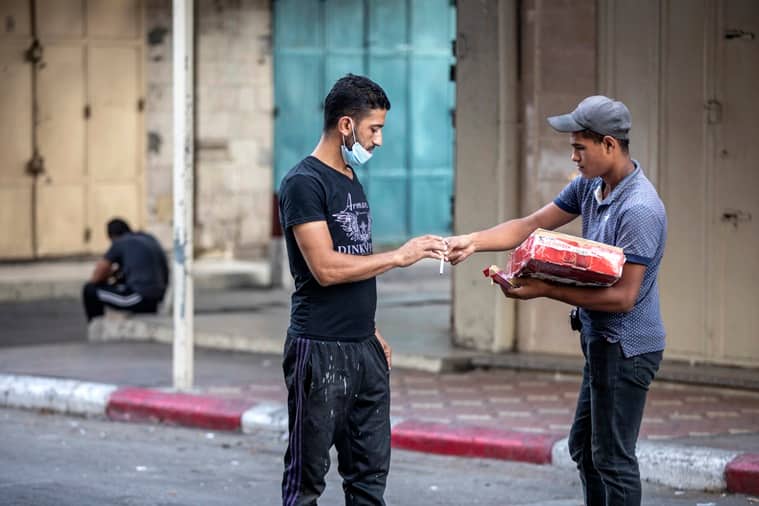 Fatherhood made it all worthwhile, he said. No marriage would have meant no Dina — and he believed it was important to raise children while he was still young himself.

Though still half an hour early, he strode briskly inside without bothering to savor his last moments of freedom.

He nodded at the guards on the gate, their faces now almost as familiar to him as his daughter’s.

At times in jail, al-Garosha admitted, he even forgets what Dina looks like.