After months of putting the state on the back-burner, Harris has stepped up her presence in Iowa, spending more days there in recent weeks than she did in the entire first half of the year. 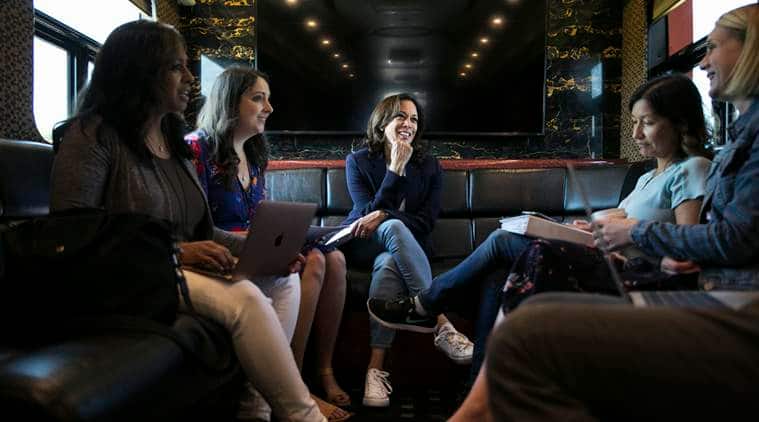 Sen. Kamala Harris ordered tacos at a Mexican joint in Storm Lake (two chicken, one pork). She mingled with the masses at a New York-themed bar in Sioux City. (“You’ve got the whitest teeth,” one patron told her. “That’s a plus right there.”) She sampled apple egg rolls and flipped pork chops at the Iowa State Fair in Des Moines.

“I can also flip Republicans,” she grinned while gripping a metal spatula.

As Harris trundles her way across Iowa on a five-day bus tour that is her longest trip yet to any early primary state, the California Democrat’s embrace of Iowa’s quirky political traditions has delivered the unmistakable message that the state’s kickoff caucuses are increasingly central to her 2020 calculations after months of focus on South Carolina.

By the end of her tour on Monday, Harris will have made more stops in Iowa on this trip than she did in the entire first half of 2019, according to the Des Moines Register’s candidate tracker. She did not once venture farther west than the Des Moines suburbs until July, as her one planned trip there was scratched because of Senate votes.

“You can’t fake showing up,” said Jim Eliason, the Democratic county chairman in Buena Vista in northwestern Iowa, who happily introduced himself to Harris, outside the Storm Lake taqueria on Friday.

Now Harris is showing up. The giant crowd of reporters, cameras, supporters, staff and even some hecklers that shadowed her across the state fairgrounds testified to a rising presence in the state.

Her campaign boasts 50 full-time staff in Iowa, plus 20 paid fellows, spread across seven offices. She bought her first television ad of the primary this week here, airing a minute-long introductory spot statewide. And in the latest Iowa poll, from Monmouth University, Harris had inched up to third place, at 11%, behind former Vice President Joe Biden (28%) and Sen. Elizabeth Warren (19%). Sen. Bernie Sanders was at 9%, Mayor Pete Buttigieg was at 8% and the rest of the field was far behind.

Strategists for Harris say her newfound focus is a result of the surprising degree to which the race in Iowa remains wide open, despite Biden’s continued advantage in the polls and the sizable operation Warren has constructed. It is also a tacit acknowledgment of history: those outside the top-three finishers in Iowa rarely go on to capture the nomination.

Harris’ husband, Douglas Emhoff, who joined her at the state fair, has been courting Iowa activists and officials to ply them for information and possible endorsements. He has even traveled to Iowa on his own for meetings.

“Do you think Kamala can still win Iowa?” Emhoff recently asked one Iowa Democrat, after acknowledging her slow start in the state, according to a person who relayed the private conversation anonymously in order to maintain a relationship with the campaign.

Harris and her team have long been circumspect about the “W-word” and Iowa. Her campaign had initially sought to tamp down expectations here, suggesting that, unlike some rivals, victory was not essential. South Carolina, with its heavily African-American electorate, instead, has been pinned as the state most likely to propel her candidacy forward. But South Carolina is the fourth state to vote, and scoring an earlier victory elsewhere is often key to success there, as it was for Barack Obama in 2008.

Harris herself was in Iowa on the night of Obama’s Iowa caucus victory, which famously helped him consolidate the support of African-American voters over a popular and well-known Democrat, Hillary Clinton. Now it is Harris seeking to chip away at the solid support in the black community for another well-known Democrat, Biden.

In an interview aboard her campaign bus, where snacks included Iowa-shaped cookies and some with “Kamala” written in frosting, Harris said the Iowa caucuses are “obviously significant in terms of the perception of the strength of the candidacy” going into the rest of the primary calendar. “You can’t deny that,” she said.

As summer has unfolded, Harris has more firmly found her ideological place in the expansive primary field: landing herself somewhere between the unalloyed liberalism of Sanders and Warren and the moderation of Biden.

“From my perspective, what people want is that you see them, and you are prepared to solve their problems and the issues that wake them up in the middle of the night,” Harris said in the interview. “They couldn’t give a hoot about your ideology. That’s not what people want right now. Because ideology doesn’t fix problems. And what people want — I believe people want a problem-solving president.”

In Sioux City, for instance, she sidestepped a question about whether she would label President Donald Trump a “white supremacist,” a designation that some of her rivals in the primary, including Warren, Buttigieg, Sanders and Beto O’Rourke began using last week. Prominent black politicians, like Obama, have often avoided such sharp language about white leaders and sought to stress themes of tolerance and unity.

Harris said it was a “fair conversation that’s happening” because Trump “has been about condoning the conduct and certainly accommodating the conduct of white supremacists.”

In interviews, numerous Iowa voters said they were drawn to Harris’ potential history-making candidacy as a black woman, and to what they perceived as her toughness. Fewer mentioned policy specifics.

“I think she can fight Trump and win,” said Alana Jondle, a retiree in Fort Dodge.

Harris’ inaugural television spot in Iowa features her “3 a.m. agenda,” which aims to address the economic issues that keep Americans up at night. The ad leads with her promise to cut taxes for the middle class, and includes her proposals to address gender pay equity and establish “Medicare for all.”

Angie Miller of Cedar Rapids, who came to see Harris speak on the soapbox at the state fair Saturday, said she had already seen Harris’ first ad and that “it grabbed my attention and made me really gravitate toward her.”

In her state fair speech, Harris’ pitch for a middle-class tax cut received little applause. But her new favorite line about Trump — “Dude gotta go!” — had the crowd roaring, as did her declaration that, “We will pay teachers their value!”

Asked in the interview why, as a progressive Democrat, she is leading with tax cuts, Harris said, “We’ve got to multitask.”

“I like to cook. I have five burners. They can all roar at the same time,” she said. “For most of my life, I’ve had four. Now I have five.”

Less freewheeling than some of her rivals, Harris favored structured events, like rallies and curated round tables early in 2019, rather than the unpredictability of chance encounters along the trail that have long characterized Iowa campaigning.

When Harris taped a podcast before a live Cedar Rapids audience in February, her team requested a rundown of the questions she would be asked in advance, said Simeon Talley, a Democratic activist and one of the podcast co-hosts. “They were very specific,” he recalled, more so than other 2020 candidates who have appeared.

“Even in our conversation with her, I got a sense that she was — rehearsed is maybe not quite the right word — but you got a sense that she had things that she was going to say and stay on script,” said Talley, who is undecided for 2020 but likes Harris. “It could be used as a knock against her that she’s cautious or rehearsed. Maybe there is an element of that. But it’s probably contributed to her rise and successful political career.”

With her sister and campaign chairwoman, Maya Harris, by her side, Harris appeared more than comfortable on this trip, and she greeted voters for the first two days while sporting immaculately white Chuck Taylors sneakers. She made her first campaign stop through an Iowa bar, and offered instruction on pronouncing her name (“Just think of ‘comma’ and add a ‘la’”). She asked children about their summer vacations. And she comforted a young woman who told her she came to the United States as an infant and was part of the Obama era immigration policy that shielded from deportation young immigrants brought to the country illegally as children.

Harris suggested she not only was enjoying her time in Iowa but signaled there was more to come.

“Spending time in Iowa has been really helpful to me,” she said in Sioux City. “You are making me a better candidate.”