Brazilian President Jair Bolsonaro has called Covid-19 a "little flu" and a media-created hysteria even as the number of cases and deaths rise in the country. President Jair Bolsonaro on Tuesday stuck with his claim that concern about the new coronavirus is overblown, and accused Brazilian media of trying to stoke nationwide hysteria. The Brazilian president has so far cut a lonely figure in his claims about the virus.

On Tuesday, in a nationally televised address, Bolsonaro said that media had seized on the death toll in Italy, which he said is suffering so severely because of its elderly population and colder climate.

“The virus arrived, we are confronting it, and it will pass shortly. Our lives have to continue, jobs should be maintained,” the president said.

The statement comes despite about 2,200 people being infected in Brazil so far, and 46 deaths.

Bolsonaro added that certain Brazilian states should abandon their “scorched earth” policy of prohibiting public transport, closing business and schools, and calling for mass confinement at home for their residents.

He did say people should be “extremely worried” about transmitting the virus to others, particularly to parents and grandparents.

Bolsonaro has said he tested negative for the virus.

“In my particular case, with my history as an athlete, if I were infected by the virus, I wouldn’t need to worry,” Bolsonaro said in the address Tuesday. “I wouldn’t feel anything or, if very affected, it would be like a little flu or little cold.”

His record so far

Bolsonaro  initially referred to the virus that causes COVID-19 disease as a “fantasy”.

Early March, Bolsonaro and senior aides had also met with US President Donald Trump at his Mar-a-Lago resort in Palm Beach, while a larger contingent gathered with lawmakers and business leaders at a Miami hotel and other events. Some 22 Brazilians who made the journey have confirmed they have tested positive, through public statements or social media accounts. Even the US president underwent a test and tested negative.

On March 15, despite his own health ministry instructed people to avoid gatherings, he went to a rally where he shook supporters’ hands. On March 20, he called the virus “a little flu.” 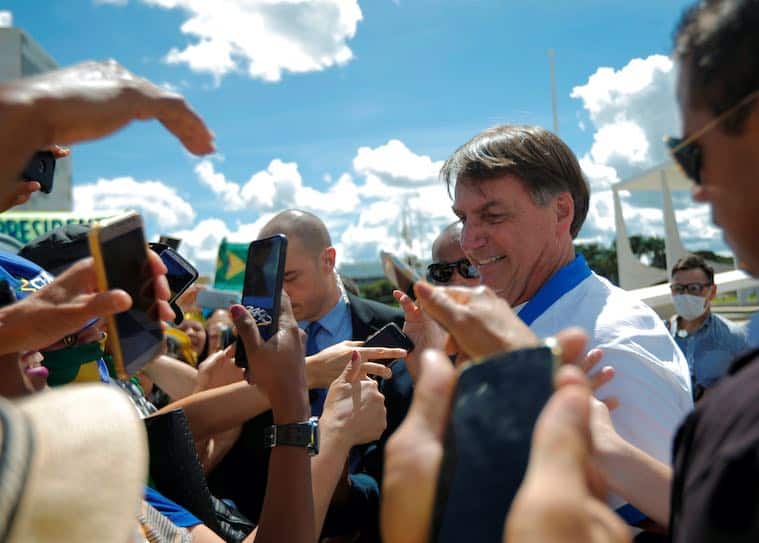 He was also forced to withdraw an emergency presidential decree that allowed companies to suspend pay to workers amid the coronavirus pandemic. The decision came after Rodrigo Maia, speaker of the lower house of Congress, criticised the move in a call with investors and business leaders.

Anger against the President

As Bolsonaro spoke on Tuesday, some Brazilians who are home in self-isolation protested what say is his blase attitude toward the pandemic by leaning from their windows to bang pots and pans. This isn’t the first time this has taken place .

After Tuesday’s address, the head of Brazil’s Senate, Davi Alcolumbre, said that the country requires “serious, responsible leadership” and that now isn’t the time to attack the press or other public officials. Alcolumbre is in isolation at home himself, having been diagnosed with the virus.

“We consider grave the position expressed by the president today, on national networks, of attacking COVID-19 containment measures,” Alcolumbre said. The position runs against the actions adopted by other countries and suggested by the World Health Organization.

Approval of Bolsonaro’s government fell to a record low, according to XP Investimentos poll released on March 20. Just 30 per cent of those surveyed rated his administration “good” or “great,” compared with 36% calling it “bad” or “awful.”

A record-high 17 per cent said his government is to blame for the current economic situation, as blame attached to the previous three administrations slowly evaporates, the poll showed.

with inputs from Reuters and AP

? The Indian Express is now on Telegram. Click here to join our channel (@indianexpress) and stay updated with the latest headlines