The carbon border tax could not only shake up global trade and invite a dispute over protectionism in the World Trade Organization, it could also create new diplomatic fault lines ahead of the Glasgow climate talks. In what may be a seminal moment in the global effort to fight climate change, Europe on Wednesday challenged the rest of the world by laying out an ambitious blueprint to pivot away from fossil fuels over the next nine years, a plan that has the potential to set off global trade disputes.

The most radical, and possibly contentious, proposal would impose tariffs on certain imports from countries with less stringent climate-protection rules. The proposals also include eliminating the sales of new gas- and diesel-powered cars in just 14 years, and raising the price of using fossil fuels.

“Our current fossil fuel economy has reached its limit,” President Ursula von der Leyen of the European Commission said at a news conference in Brussels.

The political importance of the effort, pushed by the European Commission, the European Union’s bureaucracy, is without doubt. It puts Brussels in the forefront of the world’s efforts to reach the goal of a carbon-neutral economy by 2050. To force the issue, Brussels has committed to reducing its emissions of greenhouse gases 55% by 2030 compared with 1990 levels.

On one level, the detailed proposals only mark the start of what promises to be a difficult and bruising two-year negotiation among industry, 27 countries and the European Parliament on how to reach the 55% reduction.

But coming before international climate talks in Glasgow, Scotland, in November, the proposals represent an effort by Brussels to assert global leadership in what must be a multilateral effort to get to a carbon-neutral economy. The proposals include a range of new standards, taxes and tariffs on key carbon-emitting industries like steel, automobiles, fuel, airlines, shipping, road transit and construction.

The trade disputes are likely to center on the so-called carbon border-adjustment tax, which the EU sees as a way to protect its own industries from unfair competition from countries with less stringent and less costly environmental standards. Others call the proposed tax protectionist. The plan, at least so far, would include imports on items like steel, cement, fertilizer and aluminum and could impact goods from such countries as China, Russia and the United States.

The result could be fundamentally altered patterns of global trade.

The proposals, if passed, would see the last gasoline or diesel cars sold in the EU by 2035, would require that 38.5% of all energy be from renewables by 2030, would increase the price charged for carbon emitted to make the use of fossil fuels more and more expensive and would use some of the money for a fund to assist those most affected by rising prices and to help them purchase more energy-efficient heating systems and transportation.

The carbon border tax could not only shake up global trade and invite a dispute over protectionism in the World Trade Organization, it could also create new diplomatic fault lines ahead of the Glasgow climate talks.

The gathering in Glasgow is an important moment for big polluting nations to show what they will do to address the emissions of greenhouse gases that have set the world on a path to dangerous warming. Scientists have said the world as a whole needs to halve emissions by 2030, which would require history’s biggest polluters, namely the United States and Europe, to make the sharpest, swiftest cuts.

All eyes are on targets set by the United States and China, which currently produce the largest share of greenhouse gases.

Although the European Union produces only about 8% of current global carbon emissions, its cumulative emissions since the start of the industrial age are among the world’s highest. But as a huge market, it also sees itself as an important regulatory power for the world and hopes to set an example, invent technologies that it can sell and provide new global standards that can lead to a carbon-neutral economy. 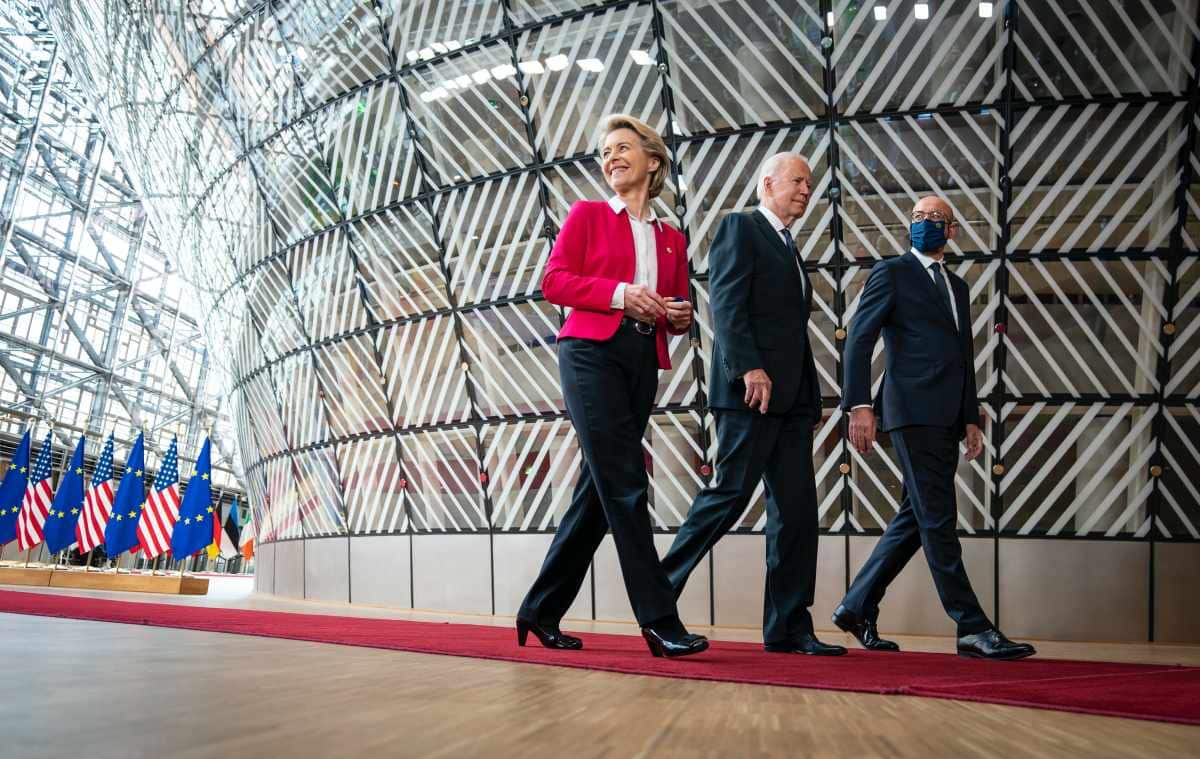 The United States has promised to reduce emissions 40% to 43% over the same period. Britain, which will host COP-26, the international climate talks, in November, has pledged a 68% reduction. China, the world’s largest emitter of carbon, has said only that it aims for emissions to peak by 2030.

“Europe was the first continent to declare to be climate neutral in 2050, and now we are the very first ones to put a concrete road map on the table,” von der Leyen said Wednesday.

The commission’s executive vice president, Frans Timmermans, who is in charge of the environment and Europe’s “Green Deal,” admits the difficulty of the challenge.

“In terms of the direction Europe is taking, it could actually be of the same nature as the internal market or the euro,” he has said.

The EU goal of 55%, increased by law in June from 40%, has prompted significant pushback from industry, lobbying groups and some member countries, especially in poorer Central Europe, that have been more traditionally reliant on fossil fuels. So the commission has tried to build in gradual markers for industry, including free carbon credits for a decade and many millions of euros in financial aid.

Brussels has also made environmentally friendly investments a key part of its conditions for countries using its coronavirus recovery fund. To be sure, while environmentalists have praised Brussels for its efforts, others say that it does not go far enough and relies too much on the development of new technologies to reduce carbon emissions. One of the key proposals announced Wednesday is a revision of Europe’s carbon market, known as the Emissions Trading Scheme, under which major carbon producers like steel, cement and power pay directly for their carbon emissions.

Another central but contentious proposal is a carbon border-adjustment tax that will target goods produced outside the bloc, so that European companies bearing the cost of decarbonization are not disadvantaged by cheaper imports from companies that do not.

That proposal, which would be gradually introduced from 2023, has not been welcomed by many countries that trade with Europe, including the United States. If passed, it could be challenged in the World Trade Organization.

The hundreds of pages of proposed laws — which the commission has called “Fit for 55,” a slogan that some have joked would better suit a yoga studio — will be sharply debated and inevitably amended before becoming binding on the 27-member bloc.

There are concerns that the poor will pay an inequitable share of the cost of decarbonization and that it will be seen as an elite project, prompting more political backlash from populist parties and groups, like the 2018 “yellow vest” protests over a climate-related increase in French gasoline prices.

That was a warning echoed by Pascal Canfin, the French head of the Parliament’s environment committee, who cautioned that extending the carbon market to heating and fuel could set off protests.

“We experienced it in France,” he said. “It gave us the yellow vests.”

But the proposals also include a Social Climate Fund, raised from these new taxes, that could provide up to 70 billion euros (about $83 billion) to help governments help the people who are most affected.


Without the new legislation, said Simone Tagliapietra of Bruegel, a Brussels-based economic think tank, Europe would have reduced its emissions only 60% by 2050, rather than reaching carbon neutrality.