After a driver intentionally ran down and killed a mother, father, daughter and grandmother in Ontario, orphaning a boy, there were calls for action against Islamophobia. 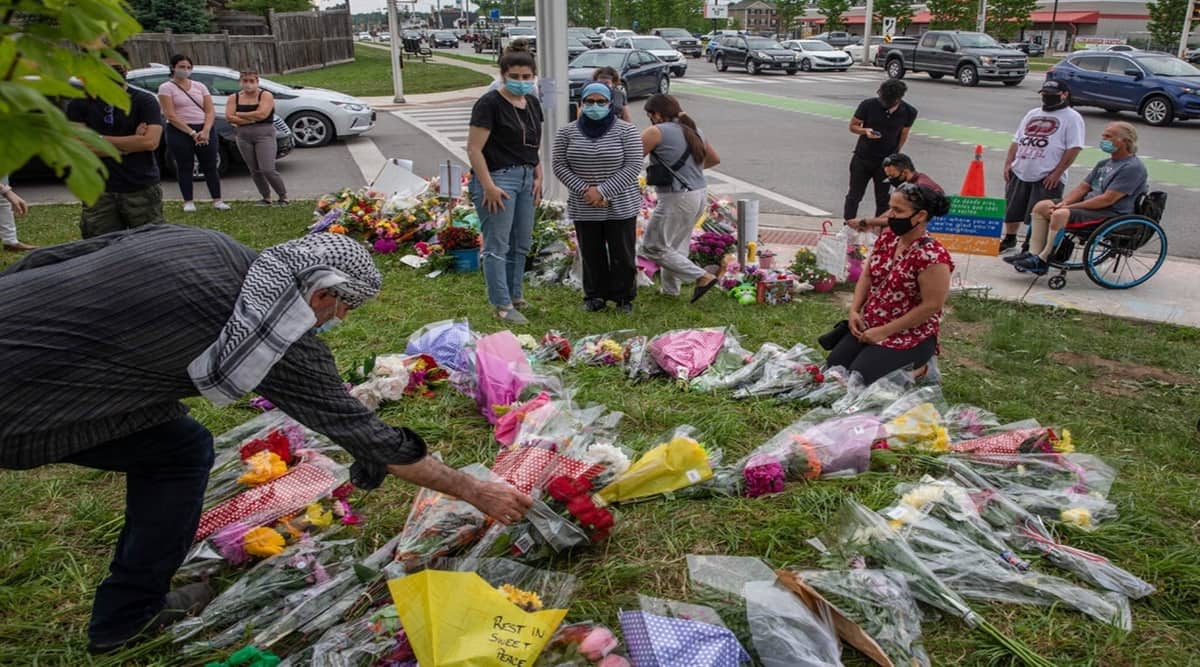 With coronavirus restrictions still in place in much of Canada, many families have taken up going out together for evening strolls. On Sunday, however, a pleasant walk became the scene of a deadly attack by a motorist who used his truck to kill four members of a family in London, Ontario, and injure a boy who is now an orphan. They were targeted, police said, because of their Muslim faith.

Along with grieving, the deaths have prompted anger and demands for government action against bigotry and violence toward Muslims.

“Even after this, there are still people saying that Islamophobia doesn’t exist,” said Mohamed Salih, a member of London’s City Council. “The challenge and a reality we must face is that far too often in our city, there is Islamophobia. It’s something we’ve known for far too long.”

On Tuesday night, the province of Ontario temporarily lifted pandemic rules banning large gatherings to allow thousands of people to gather for a memorial outside the London Muslim Mosque to remember the Afzaal-Salman family. Prime Minister Justin Trudeau attended.

Salman Afzaal, 46, was a physiotherapist who worked in long-term care homes. Madiha Salman, 44, was a doctoral student in civil engineering. They were married and had two children: a daughter, Yumna, 15, and Fayez, 9, who was hospitalized with serious injuries but is expected to recover.

Afzaal’s mother, Talat Afzaal, 74, was also killed during the attack.

The couple, who arrived as permanent residents in Canada in 2007, were active at the local mosque and volunteered in several organizations.

Madiha Salman had earned a civil engineering degree from Pakistan, where she worked on a hydroelectric project for three years. After obtaining a master’s degree from Western University in London, she was completing work on her doctorate.

Jason Gerhard, the professor who supervised Salman’s graduate work, said in an email that her research centered on decontaminating soil and groundwater that had been fouled by toxic chemicals. Her “innovative experiments,” he said, showed that vegetable oil could be used in a process developed at the university for cleaning up chemicals in soil. The work, he added, has been commercialized and is being used to clean up polluted industrial sites.

Her husband, Salman Afzaal, worked mainly at two long-term care homes in rural communities outside of London. Jeff Renaud, the administrator of the Ritz Lutheran Villa in Mitchell, said Afzaal continued coming in throughout the pandemic when many other workers stopped.

“He was helping people at the end of their lives — your moms and dads and grandmas and grandpas — trying to give them a sense of maintaining mobility and independence for as long as possible,” Renaud said. “He really was just a tremendous soul.” Yumna, the daughter, was a student at Oakridge Secondary School, the Thames Valley District School Board said in a statement. The text of a mural she painted inside the local mosque reads: “Shoot for the moon, if you miss, you’ll land among the stars.”

Her brother, Fayez, attends the London Islamic School. It is a private institution, but the public school board is providing grief counselors and other services to its students and staff.

Afzaal and Salman had relatives in London and elsewhere in Ontario and were particularly close with a neighboring family, the Khans, who also emigrated from Pakistan. Yasmin Khan said that she, along with her parents and four siblings, came to think of the Afzaal-Salman family as relatives.

“They found family here and we found family here through them, so we all became sisters and brothers,” Khan said. “They were amazing; they were kind. They weren’t the type to hurt an animal, a bug or anything like that.”

At the vigil, held in hot and humid conditions, Trudeau said Canadians had again broken their pact to look out for one another when it came to their Muslim members.

“Islamophobia is real. Racism is real,” Trudeau said. “We must stand together and say no to hatred.”

Several speakers at the vigil talked about their fears of attacks and harassment. They urged others not to back down by removing their hijabs or shaving off their beards. “This city is my city, and this country is my country,” Bilal Rahhal, the chair of the London Muslim Mosque, told the crowd. “Never allow anyone to allow you to think otherwise because of the color of your skin, your faith or where you were born.”

Several speakers characterized the killings as an act of terrorism. Mustafa Farooq, the chief executive of the National Council of Canadian Muslims, called on the government to hold an emergency national summit on ending Islamophobia. Trudeau and other politicians promised to follow up with actions but offered no specific plans.

The driver of the truck, Nathaniel Veltman, 20, was charged with four counts of first-degree, or premeditated, murder and one count of attempted murder Monday. The London police said they were consulting the attorney general and the Royal Canadian Mounted Police about possible terrorism charges.

The police said Monday that the killings were “a planned, premeditated act” meant to target Muslims.

The police have offered no information about how Veltman planned his attack. On Tuesday, police officers were searching his apartment in downtown London.

Officers also visited an egg farm outside London. The company later released a statement saying that Veltman was a part-time employee.

Although Canada has a reputation for tolerance and recently welcomed Syrian refugees, in its most recent annual report, the Canadian Security and Intelligence Service reported that “the COVID-19 pandemic has exacerbated xenophobic and anti-authority narratives, many of which may directly or indirectly impact national security considerations.” 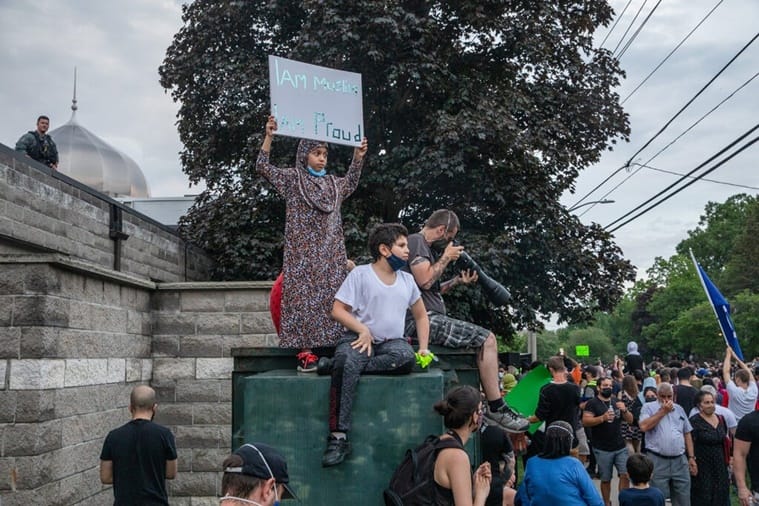 In 2019, the most recent year for which statistics were available, the police reported 1,946 hate crimes in Canada. While there was a decline in reported hate crimes targeting religion, those against Muslims rose by 10% from 2018.

London is a city with distinct social splits. The west side, where many Muslim families live, is dominated by employees of financial service companies, particularly insurance, and the sprawling, leafy campus of Western University. The east side is home to heavy industry, including a General Dynamics plant that churns out armored military vehicles.

In 2017, there was an anti-Islam march in London, held by Ontario’s chapter of Patriots of Canada Against the Islamization of the West, but it was greatly outmatched by a counterprotest.

Khan, the family friend, said that she felt unsafe wearing a hijab on the east side of town and that she had been regularly harassed by strangers over her clothing.

At times, Khan said, she even felt threatened. Once when she pulled into a parking spot at a mall where she works, a woman exited her vehicle and screamed at Khan to park elsewhere. “We don’t need this,” she said. “I have a heart. I have a brain. I am getting an education just like you. Why am I being treated so negatively?”

Salih, the City Council member, said he had also seen a rise in prejudice in the city.

“It’s more and more in our face,” he said. “There’s racism and there’s hate directed toward the Muslim community from all angles.”

Afzaal and Salman’s relatives in Canada declined to be interviewed. But Nawaz Tahir, a lawyer who chairs a local Muslim advocacy group and is acting as the family’s spokesman, said the family wanted Canada to immediately expand anti-hate laws and provide the police with additional powers to monitor online communications, in addition to holding a national hate summit.

“We have to deal with that small minority, not just in London but across Canada,” Tahir said.