‘You become a critic because the job entails watching a 100 films a year, out of which there will be five or six good films.’
‘It’s really a glutton for punishment, but you’re also optimistic and want to see exciting things.’

After knowing Raja Sen for about 20 years, it was like catching up with an old friend for Patcy N/Rediff.com, and chatting about the movies.

But this time, the conversation was really about him. After all, Raja was one of the writers on R Balki’s Chup: Revenge Of The Artist, which Rediff.com‘s Principal Movie Reviewer Sukanya Verma felt would have benefitted ‘more from the eloquence of Sen’s sting than the indulgences of its writer-director’.

Raja tells Patcy, “I salute the kind of brave and outspoken journalism I learned at Rediff, where people were taught to say their thing. It was never about agenda, never about the kind of news-gathering with ulterior motives that we see so much these days.”

Why did you take such a huge break after your last film X: Past Is Present, which released in 2015?

I was happy writing other projects, and trying to figure out what to do.

I wrote a children’s book, I worked on a documentary television series…

In 2019, I felt that the weekly movie reviews that I had been doing for 15 years… the movies aren’t getting much better, so let me take a break and see what I want to do.

That’s when I decided to write about things I feel like writing about.

Essentially, I won’t have to face every single release and that became creatively liberating.

How did the idea of Chup happen? Whose idea was it?

It was very much Balki’s idea.

He is someone I have reviewed in the past, often not very favourably.

I had bumped into him at a couple of screenings and had good conversations.

He had read the children’s book I had written and enjoyed it.

At some point, he called me and said, why don’t you come to the office, I want to discuss an idea with you.

I used to be in advertising many, many, years ago and Balki is an absolute legend in the advertising world.

I thought this would be interesting.

When I met him, he told me that there’s an idea of a film about somebody killing film critics. Because I had just quit film criticism, it felt it was really well timed.

I don’t think people have made films on critics, especially not this subject.

He said I would like you to be a part of this.

I had done film writing in the past, but those films had been written and I came on board to change lines… it was not collaborative.

I was looking forward to creatively collaborating with a cool person and film-maker. 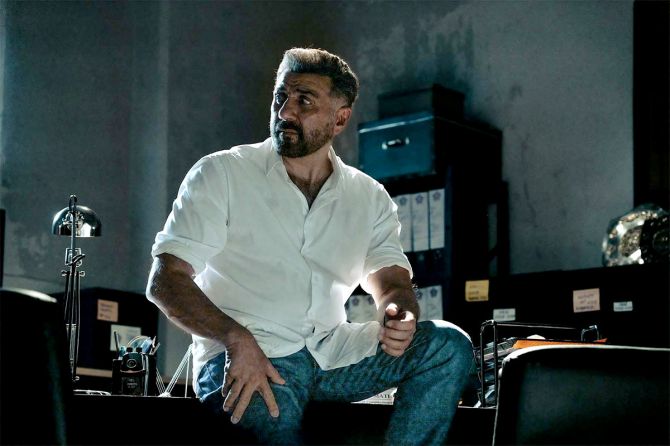 Tell us about the writing process.

We (including co-writers Balki and Rishi Virmani) would meet at Balki’s office every day. We wrote for about four or five months.

It’s a thriller, so we kept coming up with twists and then hating the twist two weeks later.

We did that a lot.

I was frequently called to put on the critic’s hat and scrutinise the work.

Balki is a very hands-on writer.

Rishi has written films like Singh Is Kingg. He’s a writer who has worked with Balki for quite some time on films like Shamitabh and Ki & Ka.

He is a very funny and sharp person, so it was very interesting to jam on this.

Balki and I primarily think in English.

Chup unapologetically has a fair bit of English because we thought it was real for the characters.

It’s about an artiste and a critic.

After a while, I started wearing the artiste’s hat, and much more sympathetic to them, saying, ‘We should be harder on the critics.’

Balki, on the other hand, would say ‘No, no, the critics are right.’

So it was a very interesting process.

Balki even went back and read pretty much every single word I’ve said about him (in film reviews), and a lot of it is not very complimentary.

That was quite an eye opener for me that he, as a creator, collaborator and artiste, was very open to understanding where I was coming from.

Even though it started out with this very violent thought, I think we connected because there is a very deep and profound love for cinema from both sides.

He realised that critics become critics only because they love cinema.

You’re not becoming a critic to tear cinema down, you become a critic because the job entails watching a 100 films a year, out of which there will be five or six good films.

It’s really a glutton for punishment, but you’re also optimistic and want to see exciting things.

When you were a film critic yourself, did it ever cross your mind that suppose there was a killer like this?

Going back to my Rediff days, at one point, I remember sharing a flat with a fellow journalist named Matthew Schneeberger. He used to say it was dangerous what I was writing about a Salman Khan film, people would find out where I stay and torch us in the house and he would be collateral damage.

I think Rediff has faced a lot of that.

We have had threats of lawsuits, threats from producers, threats from films we had sponsorship deals with… but thankfully, we’ve always had an editorial separation of Church and State.

This is a very important conversation for me because Rediff is where I became a critic, with an editor like Nikhil Lakshman, who really taught me to be fearless and not to worry about what people think, to believe in what you’re saying.

If you’re angering people or if you’re irritating a section of fans or a section of producers, it doesn’t matter at all. You have to go ahead and do your thing.

I must quickly mention that in Chup, at some point, there is a curly-haired film critic and his boss is named Nikhil. That’s definitely something I decided, little Easter eggs, to amuse us.

I salute the kind of brave and outspoken journalism I learned at Rediff, where people were taught to say their thing.

It was never about agenda, never about the kind of news-gathering with ulterior motives that we see so much these days.

I think with Rediff, we always fought the good fight, even if that fight was against bad movies, but still a good fight. What feedback did you get from the film?

The two lines that really stood out to me was when somebody came out of the theatre and said, ‘Sunny days are here again.’

It is a very good line.

It’s a line I would have used in my review headline.

They have worked so astonishingly and stepped out of their comfort zones.

The basic reaction we are getting is that as a thriller, it is fast and people are hooked to it. They find it gripping. 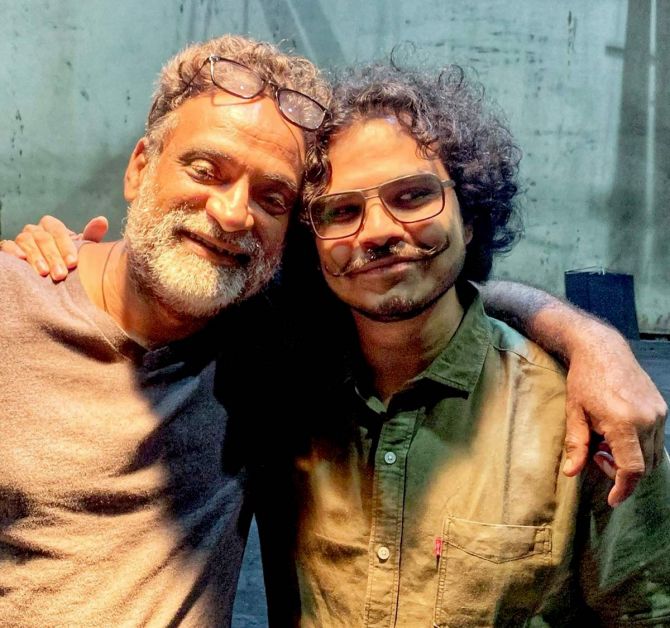 Whose idea was it to make Guru Dutt the reference point? And why Guru Dutt and his film Kagaz Ke Phool?

We were thinking about artistes, who have been hit hard by criticism.

That was the first name that popped to mind because when Kagaz Ke Phool happened, it was a commercial failure. That might not have hurt Guru Duttsaab as much as the fact that it was critically savaged.

People said it was a failure, they called it self-indulgent.

It was a very personal film for him.

When we look back at that film, decades later, we love it and call it a classic.

But at that point of time, it led to a great depression and introspection. It’s not a coincidence that he did not direct again.

He was such a prolific director, making films every one or two years, but he decided not to direct any more.

So we were trying to explore that… somebody, who made a film that is (later) universally acknowledged as a classic, is one of the greatest Hindi films of all time… For a man to pour himself so personally into the film, and then to find it failing.

Guru Dutt is very much a part of the film.

We have also used the music of Sahir Ludhianvi and S D Burman. They have given our film a certain mood and melancholy, and crazy twists, because sometimes the songs come at a point where you would not be expecting that kind of music.

Did you have a say in the casting?

Yes. The danger of getting a critic on board is that he will meddle and give his opinion everywhere!

Balki was such a generous collaborator, he would listen to all of us.

I was definitely a part of all the conversations we had about art direction or costumes… I was a very excited and hungry fly on the wall.

I even sat in on distributor meetings, which is the most surreal thing in the world.

When we wrote the title character, I remember looking at Balki and saying, ‘Oh my God. This is such a difficult part, who will play it?’

Whenever Balki is writing, his first thought is always Mr (Amitabh) Bachchan.

We were like Mr Bachchan is too old for this. He’s the best, of course, but this would have been for Mr Bachchan, maybe 30-40 years ago.

We were even discussing the dream cast, and thinking, if Kamal Haasan was younger, it would be that kind of role.

It’s very easy to start hamming, and any lesser actor would have hammed his way through the role.

But Dulquer is such a special performer. He lifts the material.

He came on set with so much conviction and intensity. He was also clear that this was something far out of his comfort zone.

When we watched the preview, he was watching it with his wife (Amal), who was dazed because she’s never seen this side of him. She was completely frightened.

Shooting with him was a great experience.

He would do a shot, and ask pretty much everyone around him how good it was, what he could do better. 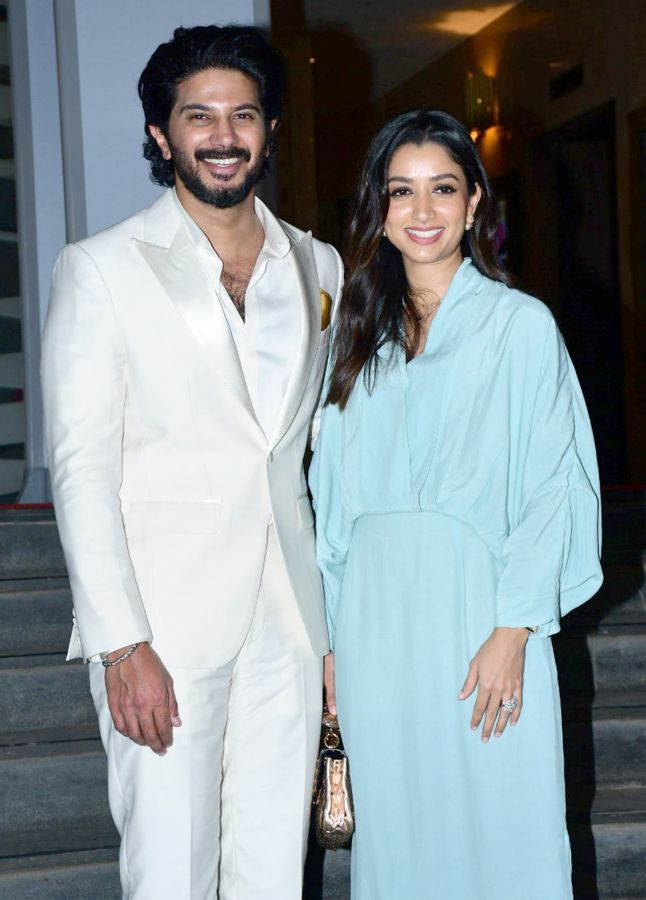 How do you get inspired to write a film? Which writer/director inspires you the most?

There are a lot of great writers.

If you look at the classics, we look at Billy Wilder, Woody Allen, David Fincher, Steven Soderbergh… these are guys who are always making something unique.

In India, I look up to the works of Jaideep Sahni or Juhi Chaturvedi because they pepper their writing with so many insights. It will be a throwaway scene, but it will tell you something about that milieu, about those characters.

The best we have right now is on television, like Succession by Jesse Armstrong. Every line is loaded. Every line is a gem. You want to take it out and put it on a T-shirt.

Aaron Sorkin has been a huge influence on me as a writer. 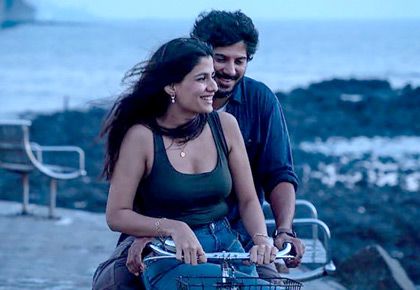