The plot keeps getting weirder by the minute, and scenes leapfrog round with no control…
The end result is bafflement and boredom, observes Deepa Gahlot.

For a film that aimed at a pan-Indian release, the title Vikrant Rona does not fit.

In Hindi, ‘rona‘ is to weep. And no, the hero is not a tragic tear-shedder.

He is an Amitabh Bachchan-inspired rogue cop, who lands up in a fictional place where the sun does not shine.

The film, directed by Anup Bhandari, is set in Kamarottu village, surrounded by thick forests and haunted buildings with cellars and attics littered with antique junk, and in an indeterminate period that can be only guessed at because Hema Malini is mentioned in a dialogue.

The location is a head-scratcher too, where people speak Hindi (dubbed from the original Kannada), Marathi, Bhojpuri, but names and costumes place them in Karnataka.

In a scary prologue, a woman driving a car is attacked and her daughter gets kidnapped.

This foreshadows a later plot point about kids mysteriously being found hanged to death in the jungle, with the faces painted in yakshagana colours.

A family arrives there to conduct the wedding of their daughter Panna (Neetha Ashok) in their ancestral home, and told by Janardhan Gambhir (Madhusudan Rao), the perpetually angry patriarch of the village, that the spooky mansion cannot be opened without a pooja.

Then Gambhir’s long-missing son, Sanju (Nirup Bhandari) turns up, the local cop’s headless body is found in a well, and a sinister game is afoot.

The new inspector, Vikrant Rona (Kichcha Sudeep) arrives in a ship large enough to carry his jeep, and while he gets into a fight — compulsory ‘introduction’ scene for a macho film hero — he seems to ignore the contraband ostensibly being smuggled in.

He orders his subordinates around, like they were his personal servants and later insists on moving into the haunted house.

He wanders around the jungle, always in the dark, is duly attacked by strange men, who are duly thrashed by him.

At some point, the 16 abducted and murdered children are casually mentioned. And for no reason but to spread some extra red herrings into the pickle, there is also a cross-border smuggler introduced — what he smuggles and to whom is not clear.

The plot, such as it is, keeps getting weirder by the minute, and scenes leapfrog round with no control.

Songs are randomly inserted, and Jacqueline Fernandez is air-dropped probably from another pot-boiler, as a woman who runs the local booze joint and obliges with an ‘item’ number, so that Vikrant gets a chance to shake a leg too.

For a comedy track, there is a Muslim taxi driver with 11 children!

The family drama and a love triangle keeps running in the background.

Panna has more courage and curiosity than the local cops and keeps stumbling into crime scenes, hidden clues and things that go bump in the night.

The viewer — 3D glasses in place — can only watch the terrific, if overdone production design, action and scare sequences, beautifully lit, composed and shot (William David), not coming together in any coherent manner.

Once the back story is revealed, it does make some sense, but why bury it in a fog of extraneous characters, needless complications and all round bizarrerie?

It is exasperating to watch so much effort expended for so little effect because the end result of it all is bafflement and boredom. 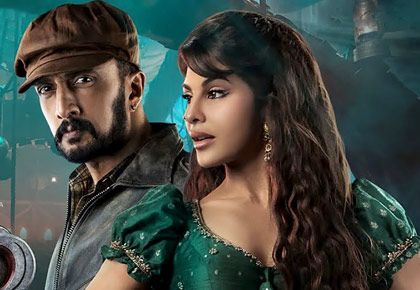