Runway 34 is a clumsy cocktail of Hollywood movies spiked with the Bollywood brand of God complex, sighs Sukanya Verma.

A plane full of passengers is moments away from an imminent crash.

The co-ordination between the cockpit and control tower has gone awry.

The passengers are praying and panicking.

The cabin crew is on tenterhooks.

The co-pilot is having a meltdown.

In meerkat Timon’s words, ‘disaster’s in the air’.

But pilot-in-command Ajay Devgn is deadpan as ever.

The man’s done a fair share of daredevil gigs to waste another second on mortal emotions like fear.

Instead, our flying cowboy flips a cigarette in his mouth, closes his eyes and chooses to go ‘blindly’ while a trance inducing Jasleen Royal number drowns out the high-speed fall and lulls a nightmarish visual into an eerie hallucination.

Where Clint Eastwood’s Sully argues over the practical versus theory conflict confronted by its flyer, Robert Zemeckis’s Flight broaches on the moral ambiguity of its able albeit alcoholic pilot.

Both Tom Hanks and Denzel Washington colour the dilemma and disposition of their respective characters in expansive detail.

But Captain Vikrant Khanna (Devgn) is neither a paragon of virtue nor a dark, dysfunctional figure struggling to stay on course.

He’s just a cliched Hindi film hero whose swaggering entitlement and cocky bravado must stay intact whether the plane is trembling in turbulence, a disgruntled boss threatening him with consequences or the AAIB (Aircraft Accident Investigation Bureau) chief lambasting him for professional negligence.

Devgn acts and directs this lacklustre, laughable, script by Sandeep Kewlani and Aamil Keeyan Khan that is embarrassingly clueless about what it wants to say.

It’s not a study on pilot life.

It’s not a commentary on aviation business.

It’s not about human ethics or fallibility or heroism.

It’s barely even a rescue drama.

Unless you count Devgn’s regular cinematographer Aseem Bajaj’s slick visuals, dominated by a snazzy blue palette and imaginative compositions of dull, indoor scenarios injecting verve in the proceedings as one.

Back in 2015, a Doha to Kochi bound Jet Airways aircraft made an emergency landing in Trivandrum owing to bad weather and poor visibility.

If Runway 34 wants to make a sympathetic case for the pilots at helm, it does a rather shoddy job.

If Runway 34 wants to recreate the dread and danger of their near-death experience, it fares even worse.

Forget urgency in the air, the ambience is so meek, I’ve felt more intensity in Bollywood rain songs.

Also, the less said about the passengers — mandatory sick old lady, quarrelsome Gujarati businessman, hijab-clad mother nursing an infant, curious punk with a phone capturing it all — the better.

At first, the plot depicts Captain Vikrant as a wild party animal, sneaking out of his hotel in a hoodie — clubbing, drinking, speeding only to wake up from a hangover and fly off a fully booked flight.

An hour later, Runway 34 spends all its running time absolving his imprudence and conceit by hailing his eidetic memory and blaming a creepily coughing control tower employee.

‘I have a photographic memory,’ he keeps bragging to every second person and exerts his superiority over a gushing colleague by boasting about the significantly greater number of hours he’s flown in comparison to her rookie.

Rakul Preet Singh plays co-pilot Tania Albuquerque whose regularly mispronounced surname (Alburcocky, Alburkirk) is purely for laughs and the most humourless bit in an already tedious premise. Wish I could say there’s more to the part than a sidekick bossed around by her rude and reckless senior. She makes the most of whatever is left.

There’s the uneven wife character (Aakanksha Singh) alternating between discontent and supportive. The chemistry between Devgn and Singh is so painfully awkward, it’s like he dialled a wrong number or walked into the wrong house.

Runway 34 suggests it wants to go somewhere sly with Boman Irani’s crafty airline owner on the brink of merger and introduces legal eagle Angira Dhar as a tough talking problem solver, but both fizzle out even before they are launched in action.

If the first half is centred on Captain Vikrant’s aerial misadventure and tolerable VFX, the second is an unintentionally comical courtroom drama where he defends his actions against the pedantic Narayan Vedant (Amitabh Bachchan), temperamentally not too different from the stern Narayan Shankar of Mohabbatein over wobbly lie detector and alcohol breath tests.

Wonder if Bachchan’s brief was to portray a stickler for rules like a daunting headmaster ready to holler at anyone who dares disobey.

He sure takes the task a tad too seriously.

One sees glimpses of their Major Saab equation when Devgn’s big fat male ego gets squashed by Big B’s bigger, fatter male ego. But Runway 34 is much too sketchily written to build anything major on that.

They need intelligence, imagination and coolness that stems from character, not cigarette butts. 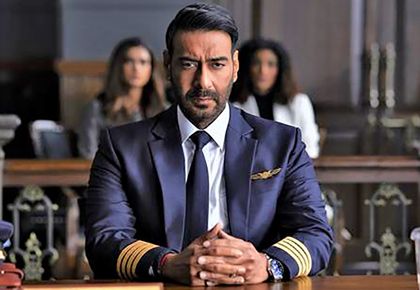