“He’s a man who comes on set completely, unabashedly, without any judgment, without any baggage, without any unnecessary preparation. He comes to surrender to the vision of the film and the director,” Karan Malhotra tells Ronjita Kulkarni/Rediff.com in the first of a fascinating three-part interview.

You are the first director to direct two Ranbirs in a single film. How did that double role idea with Ranbir happen?

The intention was never to have to come up with two Ranbirs, the idea was to get him to play a part.

I remember when I was narrating to him, he offered himself in the father’s part as well because he felt it was challenging.

I could not have said no to this opportunity.

We started doing a look test and all of that, and luckily, he looked convincing as both characters.

He’s a dream-come-true to work with.

He can spoil any director that he works with because he’s a man who comes on set completely, unabashedly, without any judgment, without any baggage, without any unnecessary preparation.

He comes to surrender to the vision of the film and the director. Ranbir is usually associated with urban films. What made you cast him as a dacoit in a period film?

What happens is, when we are writing our material, we start imagining an actor’s face by the time we finish the script.

Both Adi (Aditya Chopra, producer) and I thought that Ranbir would be a phenomenal choice for this part because he would bring a breath of fresh air to it.

He would give it a visual that we’ve never seen before.

Also, I think I am a sucker for these kinds of ideas where you try to present an actor in a space or a time or a look where he’s not been seen or presented before. That excites me.

This is Ranbir’s first film in four years. Audiences are also excited about seeing him on screen again because of the news that he is going to be a daddy soon. Any pressure on you?

I am excited about the film.

As far as the daddy part is concerned, that’s his pressure (laughs).

But believe me, he’s looking forward to being a father, and it’s no pressure for him.

So it’s all good news coming in.

The whole energy around Shamshera is very positive and encouraging, so I’m trying to hold on to that and nurture that. You worked with Rishi Kapoor in Agneepath and Ranbir here. How do you compare father and son?

He loved challenges, and that was phenomenal for me because it helped me sharpen my skills and the film I was making.

Ranbir is a happy-go-lucky guy; he’s a non-confrontational person, detached.

He puts through his points of view very passively and non-assertively.

He comes on set like a film student, rather than a star.

I think that’s the basic difference between them.

But their core craftsmanship lies in their ability to surrender in all the films that they have worked in.

This is the second time you are working with Sanjay Dutt after Agneepath. What is your rapport with him like?

I just love, love, love, working with Sanjay sir because he is a really comfortable person to work with.

There’s no baggage in spite of the star that he is and the aura that he has.

He comes on the sets and delivers.

He follows instructions brilliantly and makes them his own.

And that shows on screen in such a beautiful style.

I would like to work with him as many times as possible.

The only condition is that I will go to him with a part that he will kill! He cannot be undervalued in a film.

He needs to be out there and special.

He was diagnosed with cancer during the shoot, and it was a hard time for him.

Yeah, it was a hard time.

When the news was broken to us, we were all very shaken.

I remember this reaction.

When I met him after the news, he looked at me and said, ‘Beta, fikher mat kar sab theek ho jayega.‘

He was consoling me!

I remember him coming to set immediately after his chemo, and he stood there and gave the most violent and the most energetic shot possible.

That is what Sanjay Dutt is all about.

He is all for the madness of cinema.

Things like cancer don’t bog him down, they make him stronger.

How did Shamshera happen?

When I first met Adi, he was nurturing some ideas at the time. He asked me to pick one of them, and see if I get excited as a creative.

I remember getting latched on to the core idea of Shamshera.

Eventually, Ekta (Pathak, Karan Malhotra’s wife) and I took on that idea and created a full screenplay out of it. 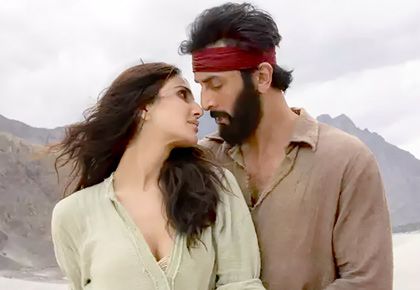