‘I joined Hrishida when I was 17.’
‘He left me with a lifetime of memories.’

He is legendary singer Mukesh’s son and dreamt of making films some day. With that in mind, Nitin Mukesh joined Hrishikesh Mukherjee as his assistant when he was making Anand, Guddi and Buddha Mil Gaya simultaneously.

It was an association that ended with his father’s untimely death in 1976, leaving him with a lifetime of memories.

In an interview to Rediff.com Contributor Roshmila Bhattacharya on Hrishikesh Mukherjee’s 99th birth anniversary on September 30, Nitin Mukesh looks back at his mentor and gives us a deeper insight into the man.

“He kept me on our toes, sometimes deliberately moving things around to test if I was keeping track of continuity. If I didn’t catch on immediately, he’d flare up. He was quick to anger, saying his assistants were his assassins and would kill him one day.”

“But within minutes he would calm down and if any of us pleased him with a suggestion, he’d talk about it all day.”

I was never inclined towards a career in academics.

I only wanted to sing and make films.

But having struggled in the initial years, he was insistent that I complete my education before pursuing my dream.

Hrishida and papa had great regard for each other and a common friend in Raj Kapoor.

Papa sang for several of his films, including Memdidi, Didi, Aashiq, Anand, Satyakam and my favourite, Anari, which had the sublime Kissi Ki Muskurahaton Pe and Sab Kuch Seekha Humne Na Seekhi Hoshiyari.

I would sometimes accompany papa to the set or to a recording. For me, Hrishda remains the greatest director in Indian cinema, and I wanted to learn the craft from him.

The call came when I was in my final year of college.

Hrishida informed papa that he was starting his ‘naya chobi‘ (new film) and if I wanted, I could join him as his assistant.

Papa wasn’t too sure as my final exams were near but I told him I’d rather graduate from Hrishida‘s school. Turned out he was shooting not one film but Anand, Guddi and Buddha Mil Gaya simultaneously.

Guddi and Anand were launched on the same day at Mohan Studio, the former with newcomer Jaya Bhaduri in the title role and Anand with Rajesh Khanna, the newly crowned superstar after Aradhana.

Every film-maker wanted his dates, but Kaka wanted to work with Hrishida. He went out of his way to accommodate him.

Anand was completed in just 28 shifts.

Amitabh Bachchan was in both films, though he was later replaced by Samit Bhanja in Guddi.

Hrishida saw the mega star he was to become in the rushes of Anand and didn’t want him playing a passive role in Guddi.

Today, it is hard to imagine Anand without Rajesh Khanna and Amitabh Bachchan who were absolutely brilliant, but Hrishida had confided that the film had been conceived as Anand Samvad with Raj Kapoor and Dilip Kumar. At 17, I was his youngest assistant and given no allowances because I was Mukesh’s son.

Our Nepean Sea Road home (south Mumbai) was a long way from Mohan Studio so papa would wake me up at 4 am with a glass of milk.

I’d gulp down half and run to catch the bus to Grant Road station. There I’d hop onto the super fast train, get off at Andheri (north west Mumbai), and take another bus to the studio. I would reach at 6.45 am to see Hrishidaalready there, playing chess.

We started with the 7 am-2 pm shift, worked through the 2 pm-9 pm shift and continued till past midnight. Around 1 am, he’d tell me I could take a taxi home, he’d pay the fare.

He never slept till the last spot boy had reached home and intimated him.

He kept me on our toes, sometimes deliberately moving things around to test if I was keeping track of continuity. If I didn’t catch on immediately, he’d flare up.

He was quick to anger, saying his assistants were his assassins and would kill him one day.

But within minutes he would calm down and if any of us pleased him with a suggestion, he’d talk about it all day.

No star could bully Hrishida or even his assistants. We were his children and no one dared misbehave with us.

There was this old wooden table at Mohan Studio with a rickety bench.

Hrishida took all his meals there with all of us. Sometimes, the stars joined us too.

If anyone got special treatment on the set, it was his favourite Buri.

Hrishida‘s home was filled with dogs, but nobody was dearer than Buri, a grand old lady with cataract eyes.

Whatever he ate, he shared with Buri and occasionally, we’d order noodles, soup or chicken for him because Buri liked them.

He was heartbroken when she died. A game of chess

Hrishida was a simple, down-to-earth man, always in his kurta-pajama, driving around in a black Fiat which you see in some scenes in Anand.

His family had built him a beautiful bungalow overlooking the sea. He spent most of his time in the ground floor living room where he shot some of his films too.

He lived to make films, acting out every scene for his actors, himself being a brilliant actor.

Nothing else mattered, except chess.

He’d reel off instructions to his cameraman, light men, actors and assistants, while playing chess, moving around the pieces. If you knew chess, you had to play with him and couldn’t leave till he had comprehensively beaten you.

There was one junior artist who was a superb chess player. Whenever we planned our schedules, we would first get his dates because it was imperative to have him on the set.

Hrishida looked after him very well but God forbid, if he beat him, there were allegations of ‘tumne cheating kiya‘ and he’d insist on another game and another, till he won.

When it came to chess, he was like a child with all his sulks, but an endearing one.

As a film-maker, he was a one-man army.

He had the final word and no one wanted to start without his nod. Even Cinematographer Jaywant Pathare, whom he blindly trusted, would set up the shot and then say, ‘Dada, ek baar dekh lijiye na.’

Ditto his editor, Das Dhaimade and everyone else.

Even his buddy Raj Kapoor would have a special trial of his films for Hrishida, telling him in Bengali that he had done the best he could, now, it was for him to suggest whatever changes were necessary. And blushingly, Hrishida would oblige.

If you worked with Hrishida, you had to know Bangla as he thought and spoke in Bengali. Even his exchange with Gulzar on the dialogues was in Bengali.

I surprised everyone by learning the language in 15 days. I still speak Bangla with singers like Kumar Sanu, Abhijeet and Sapna Mukherjee.

Jaya also only speaks in Bengali to me.

I found myself a Bengali tutor in Utpal Dutt. He was otherwise an Englishman, but taught me some colloquial phrases.

It’s a painful coincidence that I lost both my father and Hrishida, who was like a father figure on the same day, August 27, 30 years apart.

Papa died suddenly in the US where we had gone for a concert.

After his untimely demise, I had to turn away from my dream of becoming a director and take up singing as a full-time profession as that was what I knew best.

My elder sister was married, but the responsibility of my mother and three younger siblings, who were still studying, fell on me.

I was still assisting him, but a lot had changed.

If I had a show in the evening, I could just take off.

‘I know you have to make a living,’ he would say.

I joined Hrishida when I was 17.

Today, I am 71, and still miss both papa and him so much. He left me with a lifetime of memories. 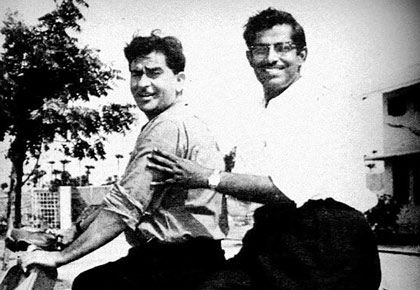