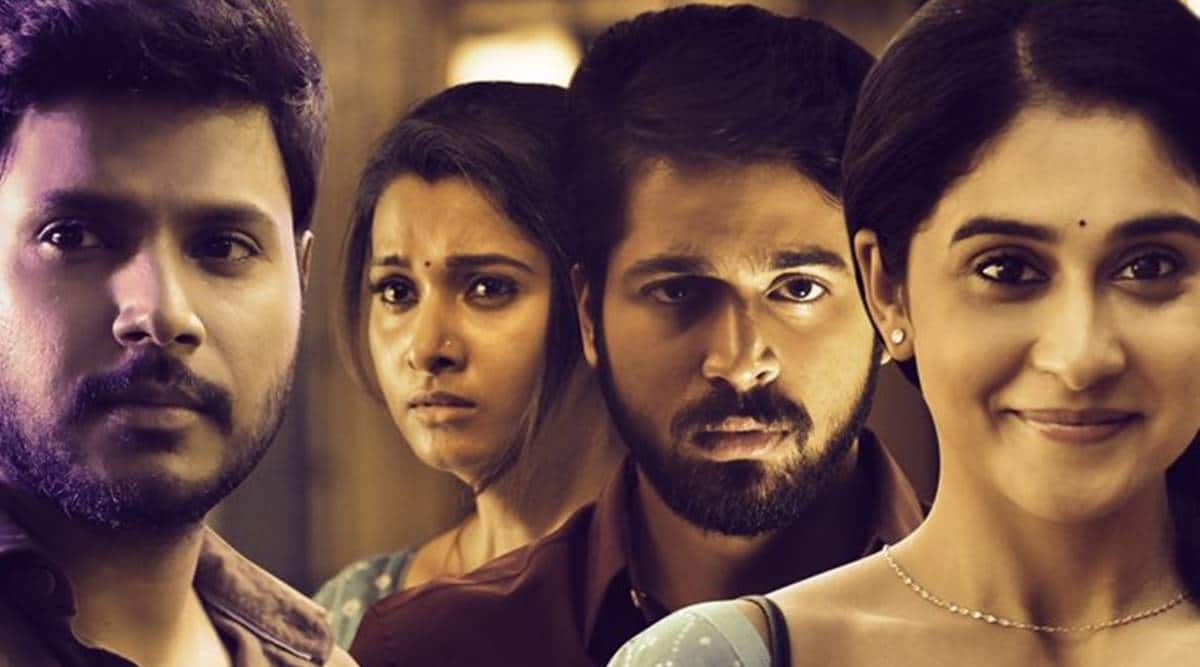 Director Chimbudeven’s latest film Kasada Thapara, which is streaming on SonyLiv, follows the lives of six different people who cross paths with each other and influence events in each other’s lives. The film opens with a story of an honest working-class man Bala (Premgi Amaren) who has Lord Krishna working for him as a wingman. It is a very simplistic story about romance filled with cliches that defined a lovable man in the 80s and the 90s. But, feels a little crony and extremely outdated from the vantage point of the 21st century.

Sample this: Trisha (Regina Cassandra), a young ambitious girl, falls head over heels for Bala, who she just met only twice because he’s really nice. Bala is not the best dresser, he has no ambition, but he’s the top guy in his profession. He can’t play musical instruments or beat up bad guys when push comes to shove. What makes Bala so instantly attractive, you may wonder? Little things like warning a girl about a faulty water dispenser, helping her find her missing certificates, and feeding stray dogs will make a man stand out among all the men and impress a girl. No wonder, Chimbudeven dreamed up Lord Krishna as Bala’s wingman, because it takes all the power of the almighty to make lack of desire such an attractive quality in a man.

It is this kind of writing that makes CS Amudhan’s spoof movies still relevant. The stretch with Premgi and Regina is a very long hanging fruit in a series of stories.

Chimbudeven manages to throw some surprises with certain creative and writing choices. For example, the stretch that follows the life of a gangster, played by Sampath Raj. We watch it entirely in a narrow aspect ratio. The gangster is in a moral epiphany, and he wants to give up his life in crime because he thinks that’s what his son Isaac (Shantanu Bhagyaraj) wants. Or is it what Isaac really wants from his father? We don’t see the full picture yet.

Chimbudeven uses the same narrow view to seamlessly transport us to another story. It plays out like a relay match as the ending of each story, sets the opening for the next.

The story of Kanda, played by Sundeep Kishan, strikes a chord. The stretch talks about how politicians use police encounters to deal with their friends, who have become a problem. Kanda is totally against what he sees as a barbaric method to deal with criminals. But, his superior, played by Subbu Panchu, hates Kanda because he’s from what he considers a low community. And he can’t stand Kanda sitting next to him as an equal. So he keeps sending Kanda on encounter assignments.

We also meet Kish, played by Harish Kalyan, who wants to get rich by cutting corners. Chimbudeven weaves a few interesting ideas around Kish but he never fully develops them effectively. However, the story of Sundari (played by Vijayalakshmi) packs a real punch to the gut. Sundari’s son comes down with a mysterious fever, and she leaves no stones unturned to snatch him back from the jaws of death. The stretch where she takes on the gang of chain stanchers and gets back her ‘thaali’ is the highlight of the entire film. She fights for her ‘thaali’ not for sentimental reasons. But, purely for practical reasons. It is only the last piece of gold with her and she wants to pawn it, to feed her son and buy him life-saving medicines. So she engages in a fight to the death.

Chimbudeven ends the film strongly with the story of Samyuthan, played by Venkat Prabhu, who is also the producer of the film. Again, Samyuthan’s characterisation suffers from certain cliches which seems like a must-have in a person for us to feel sorry for him. Samyuthan is too gullible to deserve our sympathy. But, it is in our human nature to feel a sense of relief when we see a deer escape the jaws of a predator.