‘Tamil, Telugu or Malayalam films are rooted in their culture.’
‘Hindi films are not rooted.’
‘English-speaking people are making Hindi films.’ Kangana Ranaut once called Taapsee Pannu ‘a sasti copy‘ for reasons best known to her.

When Ekta Kapoor, who has worked with both actresses in different projects — Kapoor produced Kangana’s Judgementall Hai Kya as well as her Lock Upp OTT series, and is now producing Taapsee’s latest film Dobaara — was asked what she felt about Kangana’s remark about Taapsee, she was taken aback for a moment.

But she did have an answer.

Why are south films working so well at the box office, and Hindi films not?

“Gangubai, Bhool Bhulaiyaa worked because those film-makers made what they usually do. Baaki film-makers woh banane koshish karte hai jo woh nahin banate. They are only trying to impress.”

Then, Anurag reveals what he’s ‘very scared’ of!

Why is Dobaara being released in theatres at a time when films are failing on that platform, and in fact, doing much better on OTT?

Ekta explains, “When do you go on Sunday with your friends to watch a movie…Not everything about young India is going to be about watching dhoom-dharam fights. Sometimes you want to catch a film that you can talk about at dinner later.”

Why is Dobaara so titled?

Dobaaraa, the Hindi remake of the 2018 Spanish mystery drama Mirage, releases on August 19. 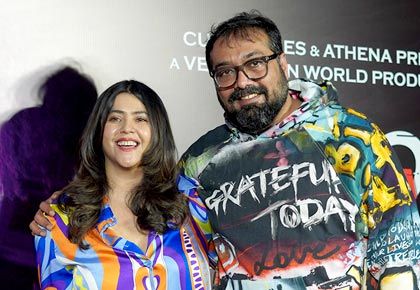