If in the current streaming age, audiences can watch the originals, why would they spend their money on second-hand content?
Is it possible that mainstream Hindi film-makers have lost the pulse of their audience, asks Deepa Gahlot.

It has become de rigueur for producers to flaunt the opening day or first weekend figures to prove that their film is doing well. But those numbers are meaningless to those who do not understand how the wheels of the film industry turn.

So it just looks like a desperate publicity ploy like those fake star ratings, when film-makers are usually quick to scoff at reviews.

Needless to say, these figures used in ads do not indicate profit or return on investment, for which some complex arithmetic comes into play.

So a film might make what seems like a decent sum of money at the box office, yet be a flop because of high production cost. That is the business of those who funded the films.

What a lay viewer can discuss is why films with major stars — who are major because fans want to see their films as soon as they are released — have been so disappointing. Both Hollywood and Southern language films are snapping at the heels of big ticket Bollywood cinema, and have been for quite a while. Enough for doomsday scenarios to be written about the end of Hindi cinema.

If Rishab Shetty’s Kannada Kantara, which is rooted in the folklore and culture of the state, can speak to audiences all over the country (thanks to dubbing and subtitles), there is something Hindi cinema is missing out on — originality and an investment in good scripts.

Recent Malayalam films have proved how powerful cinema can be made with reasonable budgets and reach its target audience.

Unfortunately, what is working with the pan-Indian audience are the spectacles. So films from Kerala have not yet been given wide theatrical release but they have developed an OTT fan following. 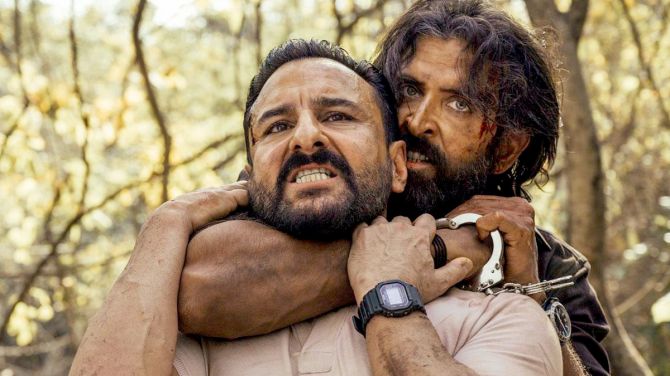 So many recent films like Laal Singh Chaddha, Thank God, Vikram Vedha are remakes, and others like Ram Setu and Brahmastra are borrowing from foreign films in spirit.

There is really no need to try and outdo Hollywood but find the lost spirit of our own.

S S Rajamouli’s RRR uses all that sophisticated technology and tells a story that would appeal to Indians all over the country (and abroad), like his two Baahubali movies did earlier.

Which raises the question: If in the current streaming age, audiences can watch the originals, why would they spend their money on second-hand content?

Is it possible that mainstream Hindi filmmakers have lost the pulse of their audience? Earlier, Bollywood simply divided the audience into mass and class, then into single screen and multiplex.

But now that everybody has such a wide variety of options to choose from on OTT, and going to the cinemas has become an expensive proposition, audiences will step out to the cinema only if they are getting their money’s worth.

If they get that from Hollywood films or Southern films, they owe no particular loyalty to Hindi cinema, which, by even making films like Raksha Bandhan and Shamshera, with their outdated plots, are taking them for granted.

If the story is dated, then the film should be made with confidence and flair, like the current rage, the Pakistani film The Legend Of Maula Jatt by Bilal Lashari.

Or if a historical is being attempted, it should have the grandeur and authenticity of Mani Ratnam’s Ponniyin Selvan. It is pertinent to note here that a stage production of the K Asif classic Mughal-e-Azam is packing in audiences, even with high ticket prices, because the story still resonates with them. Songs and dances have always been a part of Indian films, which so many Hindi films are dropping just to prove that they are upgrading.

Even on OTT, so many of the big production companies are either copying foreign shows or doing official remakes of American, European, Korean, Israeli serials, especially those with stars in the cast.

In the coming weeks, remakes of Fauda (as Tanaav, starring Arbaaz Khan) and The Good Wife (same title, starring Kajol) are lined up.

Still, there are stories in India worth filming, and an abundance of writing talent that Bollywood should know how to search for and tap.

However, mainstream film-makers born and educated in urban areas, relate more to Hollywood — and now Korean — films than to the literature and filmmaking traditions of their own country.

They have depended for too long on star power and now that this is no longer fail-safe, Bollywood has to work harder to get its groove back.