It’s certainly not the time for Dulquer Salmaan, Pooja Bhatt and Sunny Deol to stay chup.

So they invited their friends in the industry to take a look at their new film, Chup: Revenge Of The Artist, directed by R Balki, which releases this week.

Dulquer Salman brings his wife Amal to the premiere. It’s been a while since we’ve seen Sunny Deol in a movie worth his salt. Who has got Taapsee Pannu‘s attention? Waheeda Rehman, one of India’s most beloved actresses, puts in a rare appearance. Jaya Bachchan‘s husband, Amitabh Bachchan, has starred all in all of Balki’s films except Mission Mangal. Shabana Azmi, too, will be seen in Ghoomer. Sriram Raghavan takes time off from Merry Christmas — which sees Katrina Kaif and Vijay Sethupathi together for the first time — to watch Chup. 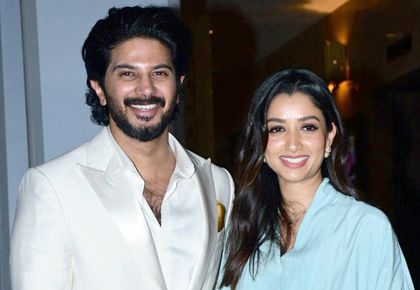