A lot of shows have been created around Kota and how it is the education hub for IIT aspirants.

Crash Course is no different.

It explores the same theme but takes a different approach.

Yes, the show will remind you of Kota Factory but the question is: Is it worth watching?

While the RJ institute is owned by Ratanraj Jindal (Annu Kapoor), Batra’s is owned by Arvind Batra (Siddharth Kak), who is known as the ‘father of education’ in Kota.

Since the latter doesn’t believe in the rat race, it is his son Shashank (Bhanu Uday) who actually runs the Batra Institute.

Both Ratanraj and Shashank Batra are at loggerheads as they want their respective institutes to be known as the best for IIT coaching in Kota.

They resort to all sorts of tricks to get as many students as possible and grab the number one spot. As a result of their politics and rivalry, the students suffer.

The show also follows a group of friends, who are IIT aspirants.

Vidhi Gupta (Anushka Kaushik) is one of the toppers from the RJ institute but she is weak in physics and therefore wants to shift to Batra’s.

She’s smart and funny but only cares about topping in her exams.

Sathya Srinivasan (Hridhu Haroon) is also a topper from RJ institute but he starts slipping in his studies when he falls for Shanaya Qazi (Ridhhi Kumar).

Shanaya is a medical student and ends up getting pregnant, which ruins all her plans. Though Sathya helps her in getting an abortion and dealing with the situation, Shanaya eventually leaves Kota.

Anil Baid (Mohit Solanki) isn’t a straight-A student but he puts in a lot of effort. He likes Vidhi but her only focus is getting a seat in an IIT.

Aviral Bharti (Bhavesh Balchandani) adds to the humour quotient along with Rakesh Gulia (Aryan Singh), Tejal Patel (Hetal Gada) and Nikki (Anvesha Vij) but they don’t get much screen time.

Anushka Kaushik packs a solid punch with her acting. You can easily relate to her and also hate her when she’s being selfish.

The rest of the student cast lend good support.

Annu Kapoor is terrific as the greedy, money-minded businessman in the education sector and Bhanu Uday gives him a good competition as his rival.

The show also features Udit Arora and Bidita Bag, but their characters fail to fit in the larger scheme of the story. Since they have no backstory either, it’s hard to understand why their characters have grey shades.

The series has 10 episodes with a runtime of 50-odd minutes per episode, and that’s too much. The makers could have squeezed the story in seven or eight episodes, making it crisper.

Of course, it’s no Kota Factory but solid performances and a good dose of drama and politics make it decent viewing. 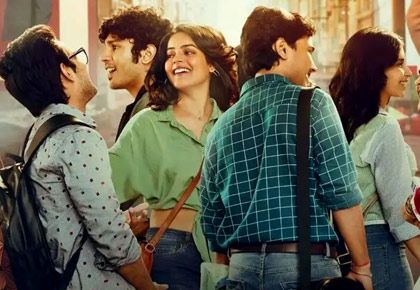