The captaincy was boring, but the nomination task episode was much better, as Priyanka Chahar Choudhary tried her best to save herself and Ankit Gupta from going into the danger zone.

Namrata Thakker gives us a recap.

Priyanka and Archana Gautam get into an ugly fight while cooking.

Priyanka gets annoyed when Archana asks her to cut the veggies.

They get into a heated argument, with Archana making nasty jibes at Priyanka.

When Archana crosses the limit, Ankit Gupta gets angry and warns Priyanka not to talk to her in the game. Shalin Bhanot gets jealous and confronts Tina Datta about her equation with MC Stan and Shiv Thakare.

Tina gets miffed when Shalin calls her reckless.

Tina makes it clear to him that she’s a mature human being and knows where to draw the line in when it comes to her friendships in the house.

Shalin feels Tina isn’t understanding his dilemma and is taking things out of context and highlighting issues that aren’t even important. He walks away, leaving Tina sulking in the garden.

At night, Sajid Khan tells Tina that Shalin is very fond of her and that they should sort out their misunderstandings.

Shalin and Tina talk things out and are back to being lovey-dovey with each other.

Are Shalin and Tina a real couple or are they totally fake? What do *you* think? Since Sajid is the captain, he’s safe from the nomination task, as are the housemates from the room of two and room of three.

Every time the buzzer goes off, a contestant from the danger zone has to nominate another from the same lot.

Shalin approaches Priyanka and strikes a deal with her that he and Tina will not nominate her and Ankit if they play fairly and give them a chance to perform in the task.

When everyone is initially against Shalin, Priyanka sides with him.

The task ends with Archana, Ankit and Priyanka being declared safe and Gautam, Soundarya, Tina and Shalin getting nominated. 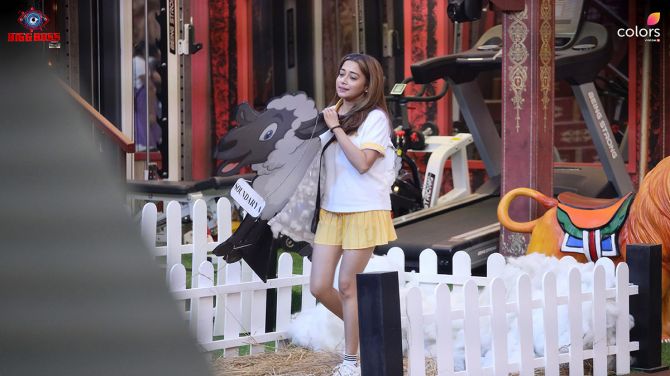 It’s good to see Shalin playing the game for once and strategising with Priyanka in order to nominate Gautam.

The same goes for Priyanka as she manages to save herself and Ankit too. While the latter has been trying to up his game, he seemed rather uninterested in the nomination task.

Ankit should either play the game or leave as he’s really not making any difference, just like Sumbul Touqeer Khan.

Archana is back, but her game is confusing.