Armaan Malik has voiced the central character in Disney's popular live-action adaptation of Aladdin. The singer talks about his dubbing experience, immense fan following and dreams of being a global star. 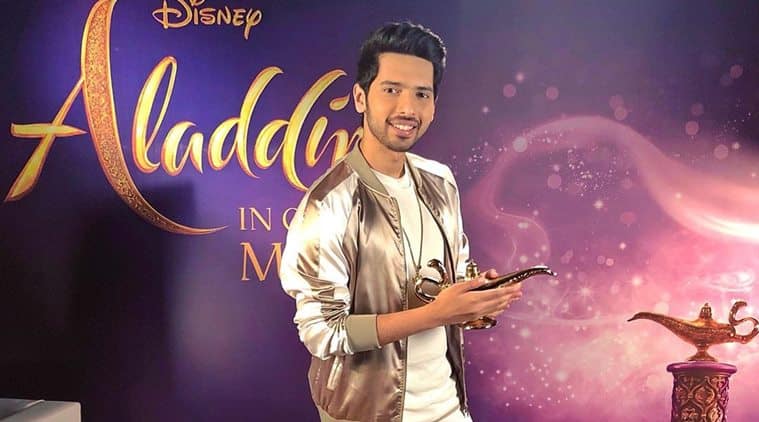 Bollywood singer Armaan Malik has lend his voice to the central character in Disney’s popular live-action adaptation of Aladdin. The Guy Ritchie directorial will see Will Smith, Mena Massoud and Naomi Scott as Genie, Aladdin and Princess Jasmine, respectively.

A finalist on Sa Re Ma Pa L’il Champs, Armaan started his musical journey singing for child actors in films like Taare Zameen Par, Chillar Party, Bhootnath and more. He got his big break in 2014 when he sang the title track of Salman Khan’s Jai Ho. Post that there has been no looking back for the 23-year-old singer.

Ahead of the worldwide release of Aladdin, Armaan Malik sat down for an exclusive conversation with indianexpress.com about his dubbing experience, immense fan following and dreams of being a global star.

Q. How did the offer to voice Aladdin come to you?

Mona Shetty from Sound &Vision India is responsible for this. The company works with the dubbing of international films. Having done a few projects as a child, I have always been close to them. The offer was not quite a straight one. She called me to do a voice test, which they sent to Disney.

Now, Disney is very particular about whether the voices really match the characters. For them, the voice artistes’ popularity is not a concern. Things worked in my favour and everyone felt my voice was best suited. To reach out to the audience at an international level really feels cool. Dubbing for the film was a great experience and I was really very excited.

Q. Apart from lending your voice, you have also sung for the film.

Yes, since it’s a musical, there are many songs. And when I got to know that I would be singing, it felt like an added bonus. I have always loved the ‘Whole new world’ track from the animated series and I was excited to sing for this film. Honestly, while the project is indeed very big, when people around me say how proud they are that I am part of this prestigious project, I realise its magnanimity.

Q. As a kid, did you ever imagine yourself as Aladdin or dress up as him at a fancy-dress competition?

I will tell you an interesting connection. So my fan army, that calls itself ‘Armaanian’, has nicknamed me ‘Prince’. And little did I know that Aladdin too becomes a prince at the end of the story. They were so kicked about the fact that their real-life prince will now give his voice to a prince. Also, I have always loved everything royal and grand. (Showing his locket) See I am even wearing a crown in a chain. As for me, I have grown up watching these films. And not just Aladdin but Jasmin, Abu and Genie, all of them have been a part of our childhood.

Q. While all 90s kids can relate to the film, do you feel this film will be relevant in today’s time?

Of course. It is more like a throwback for us and a completely new experience for the younger audience. Also, there is no age for Disney movies. It has its own charm, and you are transported to a magical world when you watch it. The youngsters might not know about these characters but they are going to love it.

Q. Which other character or superhero would you like to lend your voice to?

That’s a really difficult question. I would definitely like to attempt something more challenging after this. I think I would love to do Lion King.

Q. Have you ever thought about giving acting a chance?

Everyone around me is telling me to do it in a hope that I will be pressurised (laughs). But honestly, I don’t love acting. It has not been a fascination. I love music and I like doing things which come from the heart. I am also not trained and don’t know if I will be able to do justice. I would love if something does work out but I don’t want to promise everyone a debut anytime soon.

Q. At such a young age, you have found a great fan following. How do you handle it, especially the female adulation?

Just like any guy in my place, I too love it. But I never let the love go to my head. My focus has never been to get attention. It was to do some good music and sing great songs. The love came because of that, and so it’s special. I have only chased my goal, not fame. Also, my relationship is not like idol-fan but more of friends. They take me as one of them and relate to me and my journey.

Q. Your television debut The Voice could not garner ratings. As a judge of the show, was it disappointing?

For channels, of course, TRPs are a barometer. But everyone associated with the show knows that it could have done better. We learn from our mistakes and I think next time, they will work on it. But it was an amazing TV debut and it was an honour to be on the same platform as AR Rahman, Adnan Sami, my friends Harshdeep Kaur and Kanika Kapoor. Life came as a full circle, as I myself started my journey as a reality show contestant.

Q. Singing, judging and now lending your voice to films. Are you the jack of all trades currently?

(Laughs) It’s actually amazing to being able to do all these things. Now my focus is to work towards international music. In time, people will see Indian singers becoming global stars. We too should have our own Michael Jackson or Justin Bieber, who can be stars in their own way. They deserve that, and in the coming time, I will be championing that cause.

Aladdin will release in India on May 24.