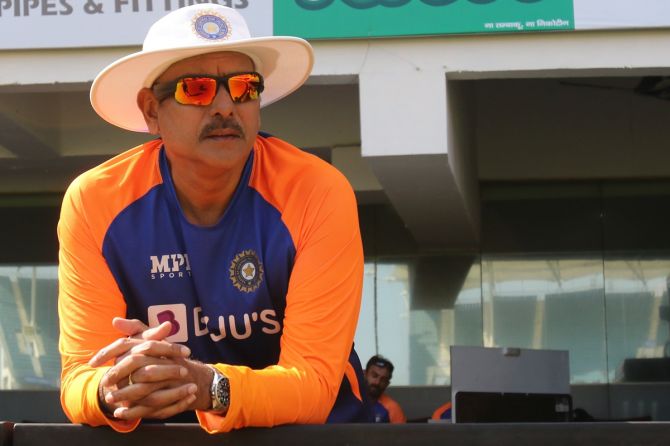 Wishes poured in as Team India head coach Ravi Shastri celebrates his 59th birthday on Thursday. Former and current players took to Twitter to extend wishes to the former India all-rounder, who had a knack for producing his best when the chips were down.

Wicket-keeper batsman Rishabh Pant took to Twitter to say: “Many many happy returns of the day @RaviShastriOfc Sir. Wishing you lots of happiness in the years to come.”

India Test vice-captain Ajinkya Rahane also extended wishes to Shastri. He wrote: “Happy Birthday, Ravi Bhai. May you keep uplifting our spirits both on and off the field. Wish you the best of years ahead.”

Former India batsman Wasim Jaffer tweeted: “Many happy returns of the day to the Champion of Champions. Have a wonderful day @RaviShastriOfc Bhai.”

India fast-bowler Ishant Sharma wrote: “Wishing you a very Happy Birthday Ravi Bhai!! Best wishes to you on this day, praying for your good health, wealth & happiness!! Have a good one! @RaviShastriOfc.”
The official Twitter handle of BCCI also wished Shastri.

The former India all-rounder scored 6,938 runs across both Tests and ODIs and scalped 280 wickets in his international career. He was also a part of the 1983 World Cup-winning team.

Shastri, known for his flamboyant personality, has achieved success in different spheres of the cricketing world.

He is currently coaching the Indian senior men’s team and under his guidance, India registered Test series wins in Australia on two separate occasions. The Men in Blue also managed to reach the semi-finals of the 2019 World Cup and the side is currently at the top of the ICC Test rankings.

India will now lock horns against New Zealand in the finals of the World Test Championship (WTC) in Southampton, beginning June 18.