When India’s first track and field Olympic gold medallist Neeraj Chopra was getting mobbed at the airport, attending VVIP felicitation functions and receiving a billion thank-yous; his two German coaches, in contrasting seclusion, were following the frenzy on their smartphones and social media.

Landing home after a year-and-a-half, Dr Klaus Bartonietz, Chopra’s 73-year-old biomechanical expert, first took a train and later travelled by road to reach little Oberschlettenbach, a 130-resident remote village in south-west Germany. While fixing a long-pending appointment with his family doctor, Bartonietz was amused to see clips and videos of a security cordon around his boy who had turned into an overnight javelin-throwing sensation.

“What is going on in India with Neeraj? It is crazy. I know it is a historic medal for India. I got some pictures and I saw the army (paramilitary) was called to protect him,” Bartonietz told The Indian Express from Oberschlettenbach.

India’s head coach for javelin, Uwe Hohn, too was settling in Rheinsberg, catching up with friends and family and also keeping one eye on India. Hohn is gradually realising what the javelin gold medal meant for a country starved of Olympic success. In a town with a population of less than 8,000, he has called on his mother and sister to talk about Tokyo, India, and the gold. 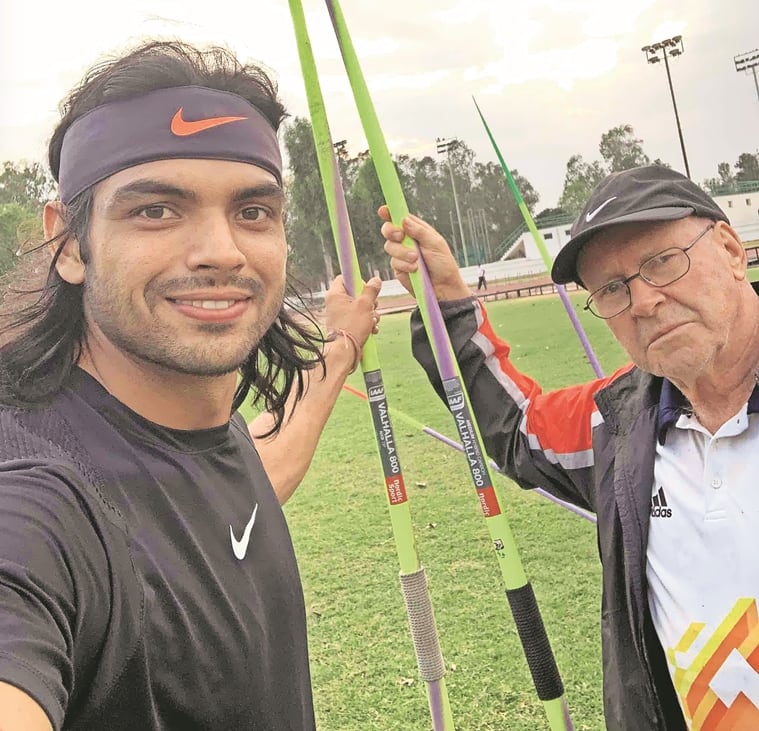 Hohn has been on social media to follow India’s emotional reception to its newest Olympic star. “Yes, sure, Facebook is full of it,” Hohn says from Rheinsberg. “At the moment it is a good time to celebrate Neeraj and his success. Neeraj deserves all these honours. I hope it will have an influence on all athletes in India and not just javelin throwers. I came to India knowing that the biggest talent in the world has no coach. I got Klaus to India. Klaus did a good job. In the past few months the technique improved to the level we liked to see,” says the man who hand-held Chopra when he became a high-80 metre javelin thrower and was his coach when he won the Asian Games and Commonwealth Games gold medals.

Far away from the din, Bartonietz, a coach since the late 1970s, and Hohn, the one-time East German star and the only one to throw over 100 metres, are enjoying a break after a job well done.

In Oberschlettenbach, famous for its hiking trails within a forest which was once a hunting ground for royals, Bartonietz has become a minor celebrity. He has been receiving congratulatory phone calls. Neighbours watched the men’s javelin throw final at the Tokyo Olympics on television and were eager to know how an Indian with film-star looks kept his cool and stayed focussed on the biggest stage. The most famous throw in Indian track and field history, 87.58 metres, has become a talking point in Oberschlettenbach.

“Earlier there were no phone calls. Some of my neighbours watched him and they were impressed with how he turned (towards the coaching staff) and raised his hand (after the second throw) and was so confident that the javelin will go long,” Bartonietz says.

In a nation which boasts of the greatest javelin thrower of their own in this era in Johannes Vetter, the man who helped fine-tune Chopra’s technique is getting recognition. “They are ordinary people and not sports people who are asking about Neeraj. Coaches I know, athletes all called too. They saw us on TV, it is funny how things change.” Bartonietz has been part of the German athletics ecosystem for a while. His one-time student Boris Obergfoll was Vetter’s coach at Tokyo 2020. “The funny thing is his coach was my former athlete. They did very well all the time (till the Olympics),” he says.

The coach also compares the cash awards given to the Olympic medalists in India and Germany. “Yesterday a friend told me that in Germany a gold medal winner will get 20,000 euros (about Rs 17 lakhs). The support Neeraj has got from the government and sponsors has been very important. Also it is not only me. When he broke the junior world record there was coach Gary Calvert, and then Uwe (Hohn) coached him when he won the Commonwealth Games and Asian Games. Also there are people we don’t know. The first teacher in school or the coach who first asked him to throw. He or she must be feeling very proud now.”

By the end of September, Bartonietz is scheduled to return to India. Hohn too knows he wouldn’t get much time to be at home. “Soon it will also be time to look forward to an interesting 2022 with World Championships, Commonwealth Games and Asian Games,” he says.

But before taking the flight to India, Bartonietz would be hitting the hiking trails around the village. “It is actually the biggest forest area in Germany. There are some villages in between. This area has a very rich history. The climate is very nice so it is good for wine growing too.”

That is after he has visited his doctor. “Your body is like your car, you have to check it before you go for a long ride.”

The one that will take Chopra beyond the Olympic gold.