India captain Rohit Sharma and his Pakistani counterpart Babar Azam said they hardly talk about cricket when they catch up, as the two skippers interacted with the media during the ICC T20 World Cup 2022 Captains’ Day in Melbourne on Saturday.

The two teams face off in a high-voltage clash at the iconic MCG on October 23. While players from both teams share a cordial relationship with each other and of late have looked rather relaxed before the big game, the fans on either side of the border contribute massively in building hype around the fixture.

It was not a surprise that out of the 16 captains, most questions were reserved for Rohit and Babar.

Pakistan and India only play each other in the ICC competitions and last featured in a bilateral white ball series in 2012, while the last Test series between the two teams was way back in 2007. 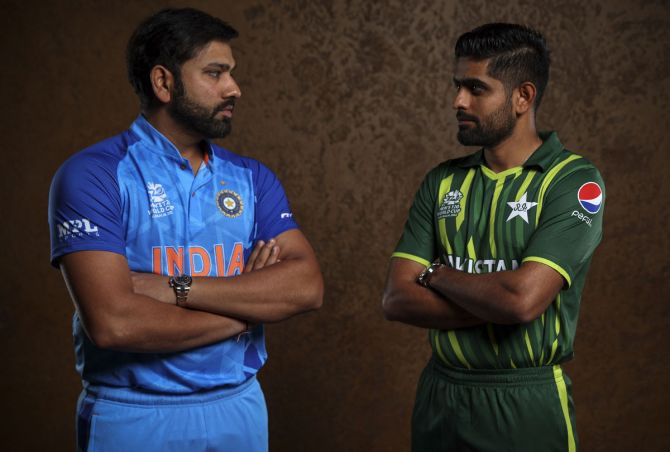 They were also asked about what they usually end up talking about when they meet during tournaments.

“We don’t even talk about cricket,” revealed Babar.

“Rohit bhai is elder than me. I try to learn about the game from him. He has achieved a lot and I try to pick whatever I can from him,” said the humble Pakistan skipper. With his response, Rohit lightened up the mood in the hall.

“Babar is absolutely right. We understand the importance of the game but there is no point talking about it and creating that pressure within yourself. Whenever we meet, we ask about each other’s families. I have met all his team-mates.

“Even our former players told us what all they talk. It is usually about ‘how their families are, how their life is, what new car they have bought or going to buy’. It is mainly that,” said Rohit drawing a smile from Babar.