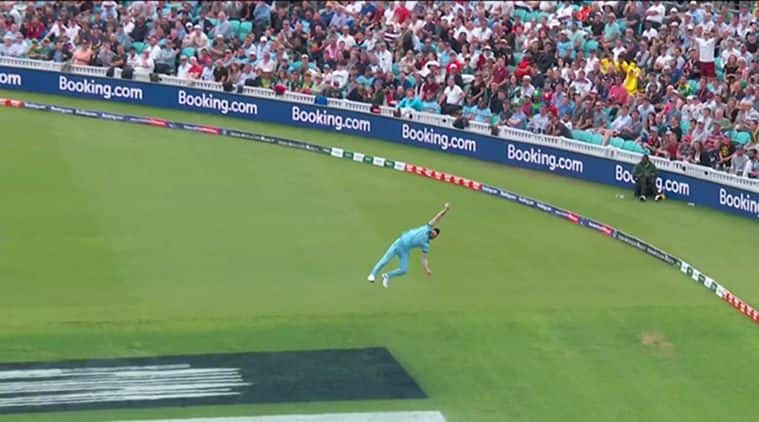 Ben Stokes has produced one of the best World Cup catches you will ever see. Stokes acrobatic skills were on their peak as he plucked one out of thin air to nullify Andile Phehlukwayo’s sweetly-timed sweep off Adil Rashid’s bowling on Thursday.

Phehlukwayo had hit the ball with the spin as it travelled at great speed. Stokes, at deep mid-wicket position, was standing a few steps inside the boundary. In normal circumstances, the ball would have gone over the fielder’s head but Stokes timed his dive to perfection and grabbed a one-handed stunner to stun the crowd.

The jaw-dropping catch soon caught the attention of Twitterati as they expressed their amazement:

Earlier, the 27-year-old top-scored for England in the first innings. He missed out on a well-deserved century. He got dismissed trying to play a reverse sweep off Lungi Ngidi’s bowling in the 49th over. He scored 89 runs from 79 deliveries including nine fours.

He also stitched a 106-run partnership with skipper Eoin Morgan for the fourth wicket. The swashbuckling all-rounder held on to one end as wickets kept tumbling on the other. He got out only after ensuring that the hosts breach the 300-run mark at Kennington Oval, London.

Later on, Morgan handed the ball to Stokes right after he took the catch and he repaid the skipper’s faith by mopping up the tail and help his side win by 104 runs.