There was controversy at the beginning of the Chennai Super Kings-Mumbai Indians IPL 2022 game at the Wankhede stadium in Mumbai on Thursday, May 12, 2022.

Off the second delivery of the CSK innings, Daniel Sams hit Devon Conway on the pads and the on-field umpire was quick to raise his finger.

Conway — who batted beautifully in CSK’s earlier games against Sunrisers Hyderabad and Delhi Capitals — wanted a review of the umpire’s decision, but was told that the Decision Review System was unavailable due to power issues.

Conway was adjudged LBW even as replays showed that the ball in all probability would have been missing the leg stump. Conway’s dismissal in the first over itself was a massive setback for CSK. 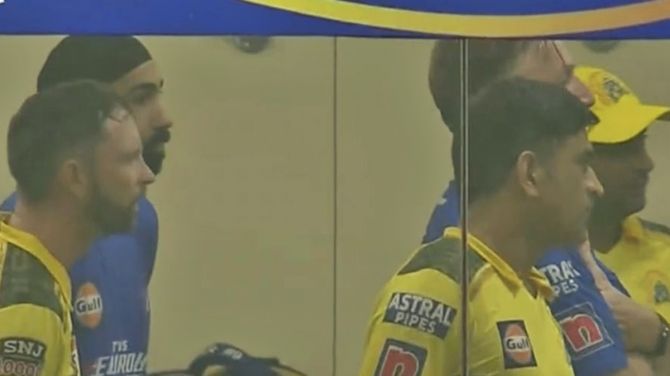 Moments later, the cameras focused on the CSK dressing room where Conway joined Mahendra Singh Dhoni and others in watching the replays.

The no DRS drama did not end there. In the next over, Jasprit Bumrah trapped Robin Uthappa in front and Umpire Chris Gaffaney raised his finger without any doubt. Uthappa too wanted a review, but was told DRS was still unavailable.

The replays showed that the umpire this time was right in his call and Uthappa would have been out even if he had taken a DRS.

The DRS was made available after the initial few overs of the game; CSK had already lost their top-order batters by then.

‘It was astonishing that DRS was unavailable due to a power cut. It’s such a big league that a generator can be used. Whatever software there was, that could have been run with power generated through backup. This is a big question for the BCCI,’ Sehwag said on Cricbuzz.

‘What will happen if there is a power cut? Is the generator only for stadium lights and not for the broadcasters and their systems? If the match was happening, then DRS should definitely have been used. Or DRS should not have been used in the entire match because this was a disadvantage for Chennai. If Mumbai were batting first, then they would have suffered,’ Sehwag added.