At one stage, the tie between the Lucknow Super Giants and the Mumbai Indians on Sunday seemed to be turning into a battle of the two captains and openers.

Both K L Rahul and Rohit Sharma went about their innings at the Wankhede stadium on Sunday unfazed by the wickets falling around them and showed tremendous grit, defiance and determination during their time at the crease.

While the similarities were aplenty, there was one glaring difference — Rahul carried his team through the entire 20 overs to a respectable 168 while Rohit’s dismissal at the halfway stage of his team’s chase set in motion a collapse in Mumbai’s fortunes.

Mumbai’s response had been steady until the end of the Powerplay where they were cruising along at 43-0 with Rohit doing the bulk of the hitting — including five fours and a six — alongside Ishan Kishan who seemed to be content in providing a supporting role to his captain. 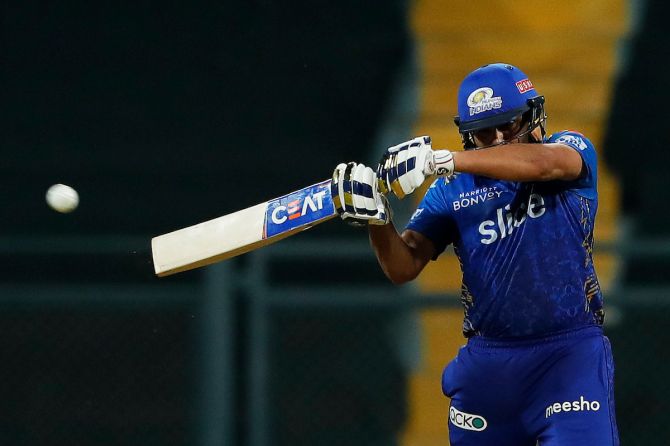 Ishan would eventually be dismissed by Ravi Bishnoi’s very first delivery under circumstances that can best be described as bizarre.

As Ishan reached across the crease to hit what seemed like a poor delivery, the ball hit the underside of his bat, bounced off wicket-keeper Quinton de Kock’s boot, shot up into the air and into the hands of an amused Jason Holder fielding at first slip.

Despite the setback, Rohit canceled out the noise and stay focused on the job at hand. Dewald Brevis departed in the very next over, failing to clear the ropes on the on side, holing out to Dushmantha Chameera.

Again, for the thousands of MI supporters who had packed the Wankhede galleries, all hope rested on Rohit.

The game-changing breakthrough came in the very next over from Krunal Pandya.

With the boundaries drying up and a rapidly increasing required run-rate to keep in check, Rohit went down on one knee and tried to get under the ball, but only managed to top-edge it to short third man where substitute fielder Krishnappa Gowtham made the catch.

Rohit’s dismissal on 39 off 31 balls marked the moment where the Mumbai run chase lost its momentum as boundaries dried up and runs became harder to come by.

Wickets began falling at regular intervals and a late 50 run stand by Kieron Pollard and Tilak Varma, though commendable, did not matter in the end as they entered the final over of the game needing 39 runs from 6 balls — a mathematical impossibility.

Mumbai succumbed to their eighth loss on the trot and Rohit was brutally honest in his team’s assessment in the post match interview.

‘That score should have been chased down, but we didn’t bat well enough. Some irresponsible shots in the middle, including mine.’ he said, adding, ‘We haven’t batted well enough in this tournament.’