DC leg-spinner Kuldeep Yadav — who didn’t get a single game in IPL 2021 when he was part of the KKR franchise — produced a scintillating performance as he returned with figures of 4/34 in four overs.

On Sunday, the leggie — who was also out of favour with the Virat Kohli-Ravi Shastri national team management — decisively swung the match in DC’s favour, first getting Shreyas Iyer (54 off 33 balls) stumped with a left-arm wrist spinner’s googly. Shreyas had no clue as he came down the track and the ball turned away after pitching.

Kuldeep then mowed the KKR middle-order in the 16th over taking three wickets, giving away just 6 runs.

Kuldeep then got rid of Sunil Narine (4) off his fifth delivery. 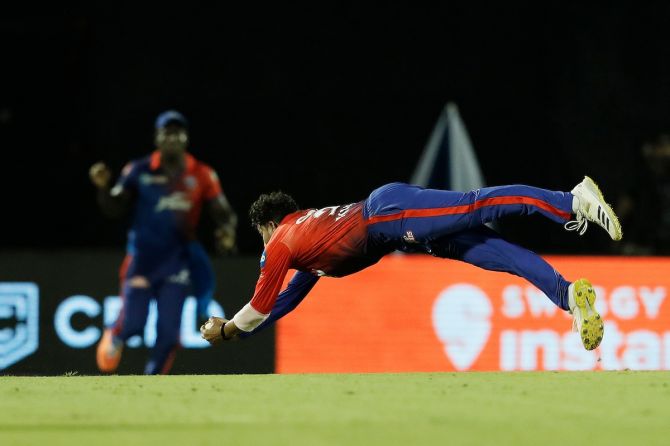 His final victim was a hapless Umesh Yadav. Kuldeep covered good ground and put in a full-length dive to take a superb catch off his own bowling to get rid of Umesh (0) on his final delivery.

He was clearly pumped up after taking the catch, indicating how much those 4 wickets against a franchise that had ignored his talent meant to him.

After Kuldeep’s spell, KKR needed 73 from the final 24 balls with 2 wickets in hand.

Even the mighty Andre Russell couldn’t do the impossible and KKR ended up at 171 in 19.4 overs.