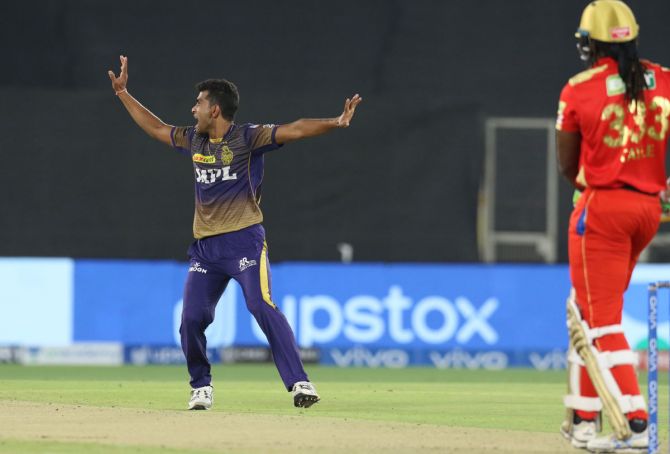 Courtesy of a clinical performance by their bowlers, Kolkata Knight Riders outclassed Punjab Kings by six wickets on Monday.

It was a complete team effort by the KKR bowling unit as everyone chipped in with wickets at vital moments to restrict Punjab to a lowly 123/9 in their 20 overs.

KKR, despite losing a few early wickets, chased down the target easily in 16.4 overs to win by five wickets and end their run of four successive defeats.

After electing to bowl, KKR’s bowlers executed their team’s plans to perfection by building the pressure with some disciplined bowling in the early overs.

K L Rahul tried to break the shackles after a slow start, but miscued his lofted shot and was caught by Sunil Narine off Pat Cummins for 19.

Young pacer Shivam Mavi capped off a fine spell with the key wicket of Chris Gayle for a first-ball duck in his final over. Bowling four overs in a row, Mavi finished with superb figures of 1/13, including 15 dot balls, which was instrumental in keeping Punjab’s batsmen tied down in the Powerplay.

Mayank Agarwal never got going despite spending time at the wicket before Sunil Narine ended his misery after a struggling 31 from 34 balls.

Nicholas Pooran threatened with a run-a-ball 19 but he was cleaned up Varun Chakravarthy, while Shahrukh Khan stroked 13 before he was caught by Eoin Morgan off Prasidh Krishna.

Chris Jordan added some respectability to the total with a quickfire 30 from 18 balls in the final overs but Punjab finished well short of a total that could challenge KKR.

The wickets were evenly shared by the KKR bowlers. Pace bowler Krishna was the most successful bowler with 3/30, while Narine and Pat Cummins struck at regular intervals to claim two wickets each.

Mavi and Chakravarthy also took a wicket each to play their part by drying up the runs.