A red card for a moment of madness from Marcus Danielson brought Sweden’s Euro 2020 to an abrupt end as they crashed out with a 2-1 defeat in their last-16 match against Ukraine on Tuesday after plotting an almost perfect path through the group stage.

The sending-off of centre back Danielson nine minutes into extra time for a high tackle on Artem Besedin while clearing the ball came just after Sweden went for broke by swapping in three attacking players in a gamble that did not pay off.

Ukraine’s Artem Dovbyk got the winner at the end of stoppage time to derail a Swedish challenge that looked to be gaining momentum just before it came to a shuddering halt.

Adhering to Janne Andersson’s cagey game-planning, the Swedes opened with a scoreless draw against Spain before beating Slovakia 1-0 and Poland 3-2 to win Group E ahead of the Spaniards and set up the meeting with Ukraine.

Few gave the Ukrainians, who finished third in Group C, much chance against a Swedish side that seemed to be finding its feet but, despite dominating for long periods, Sweden’s attack once again failed to get the balance right. 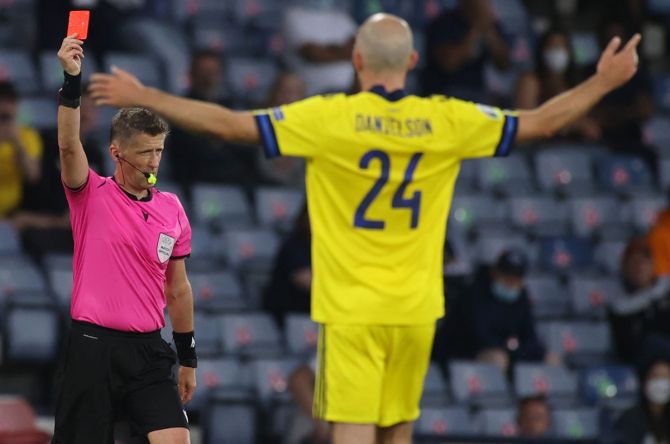 Alexander Isak started all four games but was paired with three different partners as Andersson tried to find the right mix with Marcus Berg, Robin Quaison and Dejan Kulusevski, who missed the early part of the tournament due to a positive COVID-19 test.

Though all four forwards showed flashes of brilliance, the misfiring attack was covered somewhat by the performance of Emil Forsberg, who scored four of Sweden’s goals as Andersson gave him a free role to create opportunities.

Sweden’s midfield pairing of Kristoffer Olsson and Albin Ekdal struggled with the stifling heat and punishing pace during the four games, which were played in three different cities, and Andersson had little on the bench to replace them with.

Sweden were solid and organised in defence but the lack of experience of Danielsson, a late bloomer who made his international debut in October 2019 aged 30, was exposed when a routine clearance became a costly challenge against Ukraine.

“There’s no point in saying anything (in the dressing room) because there’s nothing that sticks in a situation like this,” a disappointed and emotional Andersson told TV4.

Five years into a job that he says he would like to have for life, Andersson remains hugely popular with fans and players alike, but he needs to find a way to make the most of a talented generation of attacking players if that is to continue.