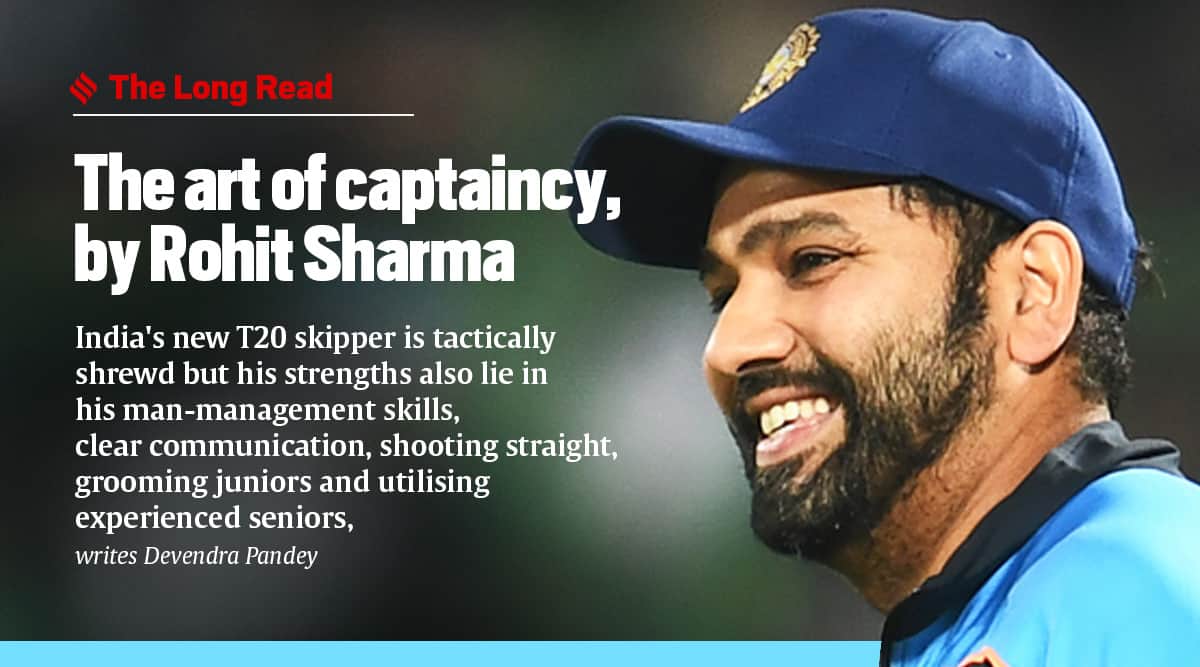 “I just feel that there are very few guys to look up to and I feel that a sense of respect towards seniors, that has become a thin line now… They do what they want to. Koi bhi kisi ko kuchh bhi keh deta hai (anyone can say anything to anyone),” Yuvraj told Rohit, a long-time admirer-turned-close friend.

Yuvraj isn’t one to tolerate perceived slights. Being relegated to the Mumbai Indians bench for the 2019 Indian Premier League final by captain Rohit, however, wasn’t one of those moments. Those in the team say all it took was a quick chat between the two. The friendship didn’t suffer, and Rohit’s Mumbai beat Chennai Super Kings to win the fourth of their five IPL titles.

Setting the obvious tactical acumen aside, Rohit’s strengths as a leader lie in his communication and man-management skills, honing juniors and utilising seniors.

Those who have played with, and under, the new India T20I captain, talk about Rohit’s instincts. Pragyan Ojha, former India international and childhood friend, saw it in the initial years of the IPL when the two played together at Deccan Chargers.

“We all know Rohit Sharma became the Rohit Sharma with Mumbai Indians. But I feel it all started from Deccan Chargers. Credit should go to Adam Gilchrist, who saw something in him and made him vice-captain, despite having so many senior players in the side,” Ojha recalls. “Rohit assessed situations and provided inputs that helped the team.”

The elder brother to the generation after him, the Team India mainstay in all three formats treats everybody as his equal; is calm when he listens and caring when he speaks.

Mumbai Indians seamer Dhawal Kulkarni says it is easier to remain focused thanks to Rohit’s down-to-earth attitude and tendency to back each player.

“Rohit knows ek player ko kharab situation se acche situation me kaise lana hai (How to improve a player’s situation). It’s the quality that makes him different from others,” Kulkarni explains. “What does a player want?

That his captain talks to him, gives him a clear idea about the team and shares his thinking about the player and how he can improve. Rohit does just that.”

In the national set-up, though Virat Kohli was the long-time India captain for all three formats, Rohit had gradually begun handling things. He has often been the one to speak up when it comes to pointing things out in the dressing room.

During a recent discussion to drop Ajinkya Rahane after a disappointing tour of England, Rohit backed the batsman. During the 2018 Boxing Day Test against Australia, it was Rohit’s suggestion that led to Jasprit Bumrah bamboozling Shaun Marsh with a slower yorker. With a rise in stature, Rohit has gained trust and respect from Indian players. One of them, who does not wish to be named, reveals how after a hard-fought game against Mumbai Indians, captain Rohit came through with some productive advice, wanting him to do well in the future.

“He understands their minds because he spends time with everyone individually. He allows bowlers to think and backs their plans,” Patel said.

His composure has been compared to MS Dhoni’s. Like Dhoni, Rohit too isn’t long-winded in team meetings, choosing instead to keep the discussions brief. And though the Mumbai Indians set-up is brimming with friends, Rohit has never pushed for a name into the playing eleven.

Another interesting facet about Rohit is his approach to the ‘match-ups’ fad that has taken over the cricketing ecosystem, especially in T20s. It has led to a situation where captains prefer to use low-quality off-spinners just because there are left-handers at the crease. Or keep the left-arm spinners away from left-handed batsmen.

Rohit isn’t one of those new-age captains who gets carried away with match-ups, preferring to let quality bowlers do their thing irrespective of the kind of batsmen on strike.

“He is not the one who believes in match-ups,” says Ojha. “Nowadays, captains think about various match-ups. ‘For this batsman, let’s bring on that bowler’ and vice-versa. Instead, like MS, he will back his instincts and take decisions on the spot. Rohit is old school. At the same time, he has a lot of match awareness.”

Saurabh Tiwary, a middle-order batsman for Mumbai Indians, says the best quality of Sharma’s captaincy is that he doesn’t hesitate in taking bold decisions. He doesn’t get fazed by big names and makes unexpected moves. Like not having Kieron Pollard bowl or drafting Tiwary into the playing XI and often sending him ahead of other established batsmen. Tiwary too was pleasantly surprised. Perhaps Rohit saw in him what even he didn’t. “If Mumbai Indians have won five titles, two would have come because of his captaincy. He is so sharp in reading the game. Who would have expected that I will get a chance in the playing eleven for MI? But he took that decision. At the same time, he knows which bowlers to use and when. Like he didn’t bowl Kieron Pollard much in the last season of IPL and the team still won. The way he used Pat Cummins in the first leg of IPL and Nathan Coulter-Nile in the second leg. It showed how clear he was in his thought process. He knows how to use his bowlers,” Tiwary said.

At its core, the Rohit Sharma brand of captaincy is driven by communication. An accessible senior, shooting straight and lending an ear to his subordinates.

So when Yuvraj spoke of a lack of seniors to look up to in the current dressing room, Rohit replied: “When I came into the team, there were so many seniors… The atmosphere is light now. It is what I attempt to do. To keep talking to the youngsters, the five-six of them.”