Images from the T20 World Cup Super 12s match between New Zealand and Namibia, in Sharjah, in Friday.

Glenn Phillips and Jimmy Neesham produced late fireworks after a top order collapse to power New Zealand to 163 for 4 in the T20 World Cup Super 12s match against Namibia, in Sharjah, on Friday.

After Namibia pulled it back in the middle overs with quick wickets of Kane Williamson and Devon Conway, Neesham and Phillips put up an unbeaten 76-run partnership to enable them finish strong.

Earlier, New Zealand’s openers got the team off to a great start yet again after being put in to bat, but Namibia fought back well, scalping the wickets of the pair inside the first seven overs.

The Kiwi openers lived by the sword and died by it, as they took the attack to Namibia early on but also perished trying to up the ante. Martin Guptill picked up from where he left off in the game against Scotland, making his intent clear with a six off Bernard Scholtz in the first over.

Ruben Trumpelmann wasn’t spared either, as Guptill walked down the track and smashed him straight back.

It was Namibia’s go-to man, David Wiese, who dealt the Black Caps the first blow. Guptill, trying to go for another big one, was done by the lack of pace, skying the ball to the hands of Trumpelmann at mid-off. Williamson and Mitchell struck a boundary each in the last two overs of the Powerplay but the latter perished as soon as the fielding restrictions were lifted. Mitchell gave Scholtz the charge but managed to slice it to deep point, where Michael van Lingen had to cover a lot of ground to take a fantastic diving catch.

Williamson and Devon Conway ensured that Namibia did not inflict any further damage with a solid 38-run partnership.

Just as the Kiwis were wrestling control back, Gerhard Erasmus got his opposite number, as Williamson, in the bid to up the ante after the drinks break, dragged on to his stumps. Conway was the next to make the long walk back. Trying to steal a two after dabbing it to the mid-wicket region, he was caught short at the non-striker’s end, with Birkenstock knocking the stumps over after a brilliant throw from Erasmus in the deep.

The two wickets in two overs pegged New Zealand back further, with Phillips and Neesham tasked with the job of steadying the ship. 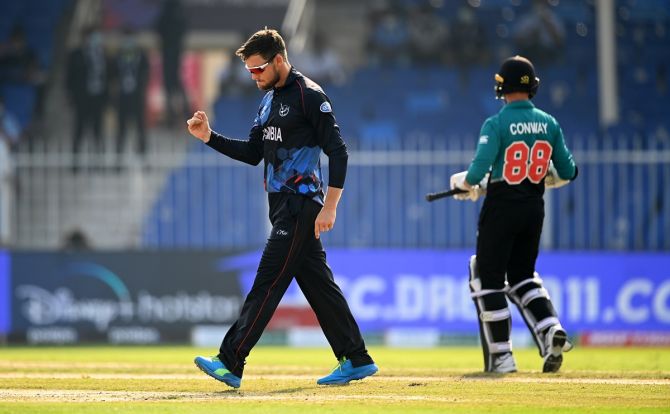 Namibia’s bowlers kept the lid on the scoring in the middle overs, but were punished in the death for staying in this line and length.

Erasmus was guilty of gifting a full toss to Phillips, who dispatched it over the ropes. Neesham and Phillips ruined Wiese’s figures in his last over, smashing him for two sixes and a four.

With the momentum now in their favour, New Zealand kept finding the boundaries as the duo of Neesham and Phillips finished with an unbeaten partnership of 76 from just 41 balls.

While Trumpelmann leaked a six and a four in the penultimate over, Smit gave away 16 in the last over, which included a six and four wides.