This last week, some of National Basketball Association’s (NBA’s) biggest names chimed in their congratulations to Raptors’ Nav Bhatia, who became the first ‘Superfan’ to be inducted into the Hall of Fame. 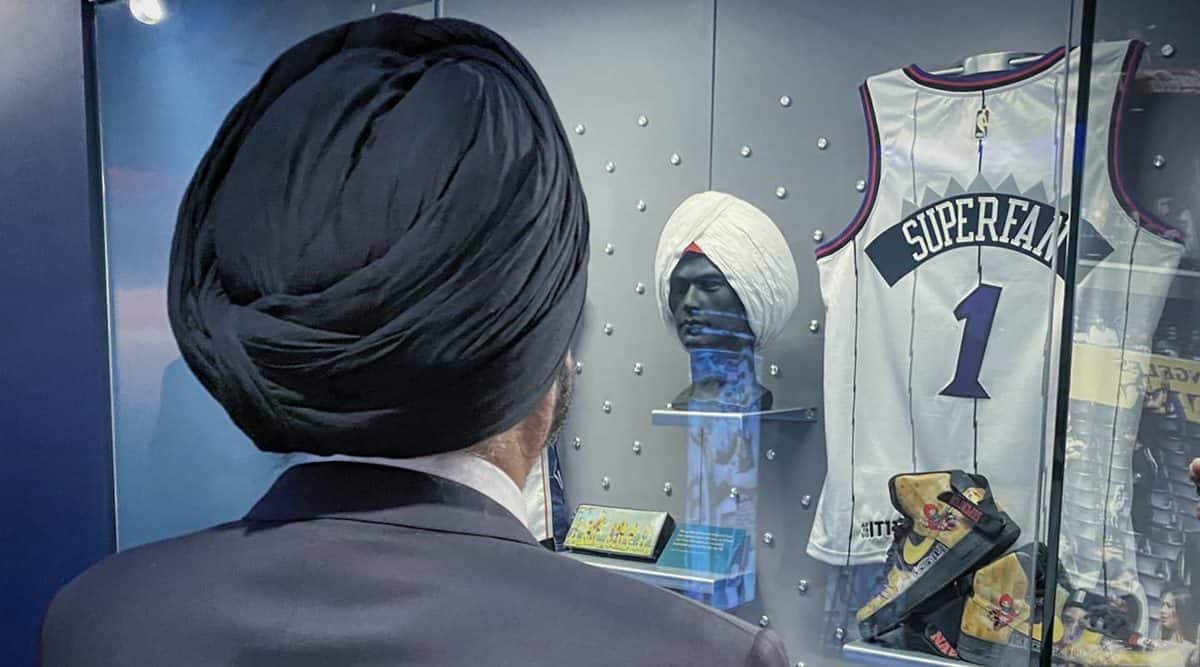 Navdeep Bhatia – Nav to the world – once told Shaquille O’Neal that the big man had no juice left in his legs and they were quaking in fear while taking a free throw. Chirping courtside at one of Toronto Raptors’ games against Milwaukee Bucks, Bhatia drove Giannis Antetokounmpo to tweet about missing six free-throws. Chris Webber told his wife that Bhatia often picked on him and a slightly unnerved Kevin Garnett would request the Raptors to throw out the “drunk”, though Bhatia hasn’t touched a drop of tipple his whole life.

This last week, some of National Basketball Association’s (NBA’s) biggest names chimed in their congratulations to Raptors’ Nav Bhatia, who became the first ‘Superfan’ to be inducted into the Hall of Fame. This included families of the ones he heckled, as well as owner Mark Cuban who when his Dallas Mavericks travelled to Toronto, would often ask for Nav’s iconic twirling towel to be taken away. “These are the greatest names in the sport. But my job as a fan was to mess with their free throws,” says the 69-year-old who has attended every game the Raptors played at Toronto, and was honoured by the NBA for his unrelenting loyalty to his team.

“We Indians are the first ones to enter the Hall of Fame as fans, and it’s still not sunk in. It’s not what happens to fans in their wildest dreams. Kids dream about winning Championships as players and for a fan the honour is huge which I humbly accept,” says the man, who left Delhi during the 1984 anti-Sikh riots, and spent his time in Toronto ensuring children from minority communities didn’t feel left out from the greatest basketball gig in town. “I’ve bought thousands of tickets so that kids – Hindus, Muslims, Sikhs, Jews, the Chinese, Jamaicans, Brazilians, Italians – can become a part of this team,” says the businessman.

It started when a white man in the late 1990s mistook Bhatia for a taxi driver. “I was wearing a suit and approached him, when he looked back and told his wife ‘Honey, I need to go. My cab’s here.’ Because Sikhs are a visible minority and were only seen as cabbies, I knew after overcoming the initial shock that I needed to change perceptions,” he says. From there, began his ritual trips to every ball game at the SkyDome.

When Toronto Raptors won the Championship in 2019, Bhatia led a parade of 80,000 as Grand Marshal.

Bhatia says he weathered the franchise’s dark days too, even as regulars got accustomed to seeing his white turban bob around the arena, nettling some serious giants. “Those early days, the team would lose by 30 points in the last quarter, win only 16-17 of 82 games and only 4,000 people would be left by the 40th minute. But you know Sikhs – we are loyal people. I never left,” he recalls. Team chairman Isaiah Thomas would pull him in front and anoint him Superfan.

Acclimatising in Canada had taken some years though, as Bhatia did odd-jobs to start life afresh. A mechanical engineer back in Delhi who played cricket like everyone else, he mowed lawns and cleaned washrooms. “We Sikhs believe in dignity of labour. Nobody could pick a fault in my cleaning. My washrooms would be the cleanest in town and my landscaping would be perfect if I worked a lawn,” he recalls.

He would walk into a car dealership to start his sales job and be mocked as ‘diaperhead’ and ‘towelhead’, but keep silent and go about his work. “There were speedbumps – I don’t call it discrimination. People are inherently good, but perception needed to change, and when they went low, I went high. I didn’t argue, just prayed to Babaji to give me strength to do my work well. I sold 127 cars in three months, and the same people started treating me differently. If you treat people the way you’d like to be treated, attitudes change,” he says. Bhatia would go on to buy the same dealership – and then some more – and work his way up the ladder.

The racist taunts would test his resolve to keep the turban. “It was a promise I made to my mother at 16. That was 53 years ago. She was a strict lady and she summoned me one day and told me I was never to give up the turban or drink alcohol. I still remember shivering when making that promise. So after the ribbon cutting at the Hall of Fame ceremony, I was overcome with tears to see my turban being showcased there. The turban is the ultimate for a Sikh and we should be proud of our identity,” he adds.

Bhatia often gets asked why he didn’t stick to following cricket. “But I was in North America. And I fell in love with this fast sport. For three hours, you are in a different zone. You forget your sorrows and fears,” he says, adding that after his totem – father, passed away in 1997, the game held him together. “I remember I’d take my car out of parking with a lot of energy after watching Michael Jordan play.”

He would watch the likes of Vince Carter and Chris Bosh become superstars, and Carter’s mother would be the first to congratulate him on the Hall of Fame honour, which saw him pick the precious jewel encrusted ring. Much before the 2019 triumph, Bhatia would watch Paul Pierce block a buzzer shot in the 7th game against Brooklyn Nets, and he would nurse his disappointment by reminding Pierce annually: “I’d tell him ‘Dammit, if only you hadn’t blocked the last shot’.”

But it is in his efforts to bring children from different communities to the game that Bhatia would find his life’s purpose. “Diversity is a strength. I have no hatred for those who didn’t treat me with respect back then. There was a time when I used basketball as entertainment. Now I want to use it to bring diverse groups together,” he says.

Named after “new hope for a young nation” in 1952 (his older brother born in 1947 was called Navraj), Navdeep Bhatia believed swearing loyalty to an NBA team was his best way to integrate into his adopted country. While he helps fund building washrooms for girl schools in Faridkot and Alwar, he was proud of the Oxygen langars the Sikhs started during Delhi’s deadly tragedy with the virus.

While he supported the rise of Canadian player Sim Bhullar, he waits for the day an Indian will play in the NBA. “They need to work hard and show that they belong and make my dream come true. But you can’t go home and eat parotha and samosas!” he warns.

While ice hockey remains Canada’s ultimate sport, Bhatia is wary of sharing his affections with one more sport. “I’ve missed many birthdays and anniversaries to follow the Raptors, so my wife won’t be pleased and I’m not exactly a Superfan at home. My married life hangs by a thin thread. And if I pick one more sport, I’ll get divorced,” says the one-game loyalist, with not a hint of guffaw, the only time in the conversation.