In 8 encounters played between these two teams at the World Cup, Sri Lanka managed to win just one. 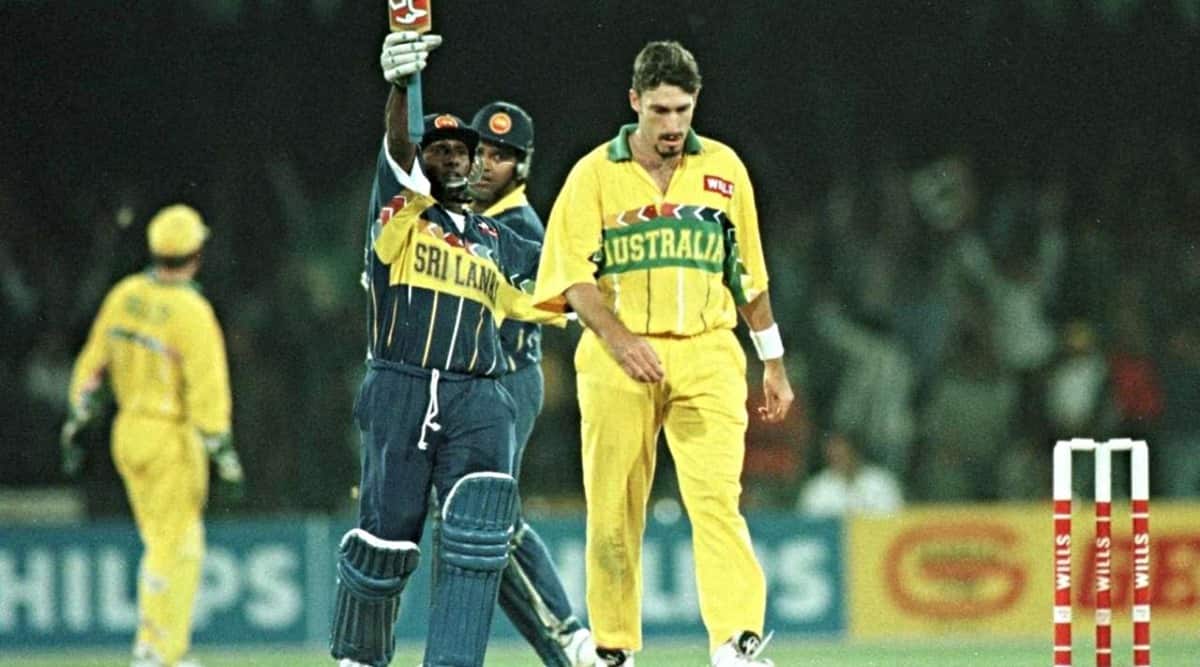 On this day in 1996, Sri Lanka defeated Australia in the finals of the 1996 World Cup. With a hundred, 3 wickets, and 2 catches, Aravinda de Silva was the undisputed hero of the match.

Arjuna Ranatunga, the captain of the Lankan team, won the toss and asked the Kangaroos to bat first. Courtesy of skipper Mark Taylor’s 74 and Michael Bevan’s 36 off 49 balls, Australia were able to score 63 in the last 10 overs and set a total of 241/7.

In reply, Sri Lanka lost their famed opening duo of Jayasuriya and Kaluwitharana, with just 23 runs on the board.

Chasing 242, it was a tricky phase at that moment but in came Aravinda De Silva, and together with Asanka Gurusinha stitched a valuable partnership to steer Lanka out of trouble.

After Gurusinha’s exit, Ranatunga joined De Silva in the middle and remained unbeaten on 47 (off 37 balls). The duo added 97 runs in an unbeaten fourth-wicket partnership and fittingly the two senior pros scripted a historic day in Lankan cricket.

Both Australia and Sri Lanka have contested eight times in World Cups.

The Lankans have however won just one match by right against Australia. The only win by right for Sri Lanka came in the final of the 1996 World Cup. In all the other matches, however, it has been Australia who have emerged victorious. The 1996 World Cup however was a different story with Sri Lanka remaining unbeaten throughout the tournament. In fact, Australia had lost twice to Sri Lanka, technically, in that tournament. Australia had pulled out of their league match against Sri Lanka in Colombo owing to security fears and the points were awarded to the host. In the final at Lahore, Sri Lanka famously chased down Australia’s total of 241 for seven in their 50 overs with 22 balls to spare. The hero of that win and Sri Lanka’s first-ever World Cup win was Aravinda de Silva with an unbeaten 107 off 124 balls.

However since then whenever both sides have met it has been a one-way traffic.

Australia won the encounter in a Super Six match of the 2003 World Cup, then in the semi-final of the 2003 World Cup and finally won in the 2007 World Cup final in rather gloomy conditions at Barbados. That 2007 final was the last full game between the two sides in a World Cup. The 2007 final was also not without some drama with the match officials forgetting the rules that were needed to be enforced in case the stipulated 20 overs had been bowled. Then in the 2011 World Cup, the match between the two sides ended abruptly, with rain playing spoilsport.

But the most controversial match between both sides was at the 1975 World Cup, when they faced off for the first-ever ODI. Australia’s paceman Jeff Thomson knocked down two Sri Lankan players-Sunil Wettimuny and Duleep Mendis-with his bouncers.

Wettimuny and Mendis were acquitting themselves well against the Aussie pace battery when the Thommo thunderbolt struck them.Years later, Wettimuny and Mendis relived their horror. “It was a like a flash. I couldn’t see the ball,” Wettimuny remembered in an interview to Cricinfo. “It was the fastest spell of fast bowling I had ever faced in my life,” Mendis reminisced. “He was averaging over 100 miles. It was seriously fast and we had no protection,” added Mendis in that interview to Cricinfo.

Thommo himself was quoted as having said: “They were only little fellas, so you couldn’t call it a bouncer exactly!”

Interestingly, Wettimuny was to later become a pilot. His best moment as a pilot was helming a special plane from Lahore in 1996 with the victorious Sri Lankan squad. Guess, who was the manager of the Sri Lankan squad? Duleep Mendis. Along with, skipper Arjuna Ranatunga, Mendis celebrated with Wettimuny in the cockpit before the team touched down in Colombo.