It’s a decision depending on your eyesight and your sympathies with either team – you could either agree with or rage against the third umpire’s call. When 11 runs were needed from 10 balls, KL Rahul slugged Shivam Mavi towards deep midwicket where Rahul Tripathi charged in from the boundary. And he leaped forward to scoop the ball much like Ajay Jadeja did in the 1992 World Cup to take out Allan Border. Luckily for Jadeja there was no doubt in that, here the umpires went upstairs for the final call. Endless replays followed, zoomer was used and the umpire decided that a tiny bit of the ball had touched the ground. Many might have felt that Tripathi had his fingers under the ball but the umpire felt it touched the ground when he scooped it up. Rahul slashed a four off the final ball to bring the equation to five from the last over and though he fell in the second ball of the final over, there was one more Tripathi moment left in the game.

Shahrukh Khan heaved the next ball from Venkatesh Iyer and Tripathi was running across to his left near the boundary and seemed to have it covered. The ball dropped in his palms and not only popped out, but spilled outside the boundary. Tripathi hung his head over the advertising boards and had a wry smile. Nothing wry about Zinta’s dimpled smile in the stands. 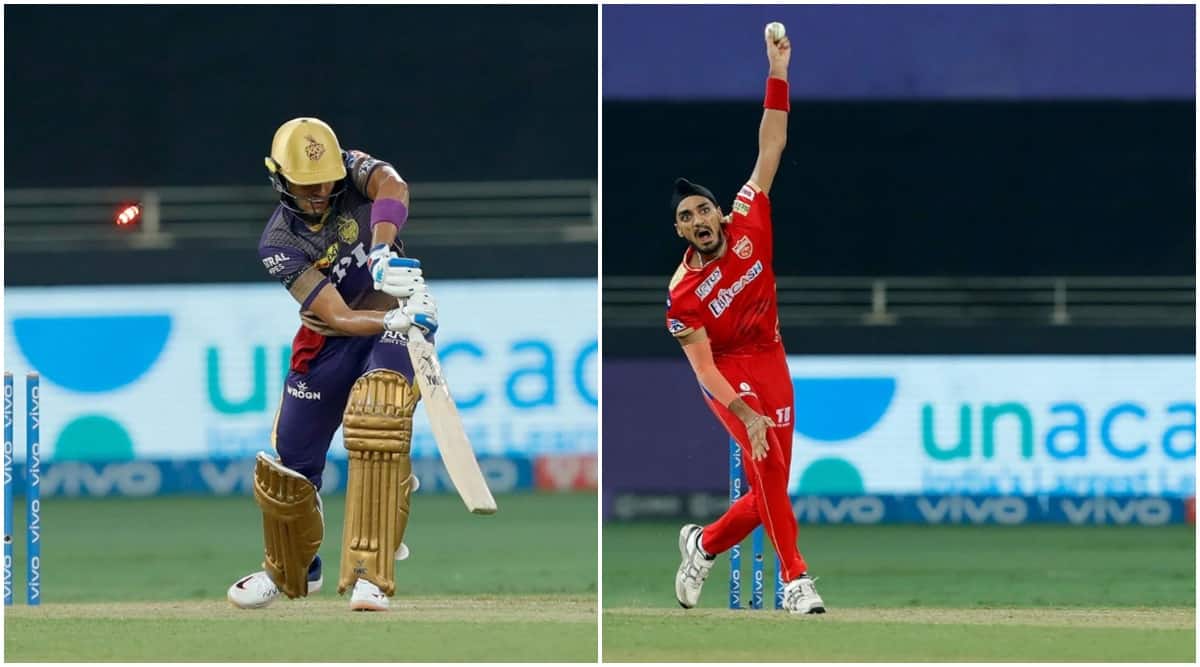 Just as he was about to release the ball, the left-handed seamer Arshdeep Singh’s mouth opened wide. It could well have been the batsman Shubman Gill’s reaction after what transpired once the ball reached the other end. It was a jaffa; Full on a length, swinging in late, and it gatecrashed through the bat-and-pad gap to clatter the stumps. All Gill was trying to do there was to defend. As ever, he was a touch late in transferring the weight on to the front foot but that ball was a beauty, worth a jaw-drop. It landed around the off stump and curved in to do the deed. The open-mouth at release seemed like a sign in hindsight – Mr Gill, here I come to swallow you up. Gill has averaged less than 20 in this year’s IPL; he would hope he doesn’t get served up more pearlers like this.

Nathan Ellis thought he had bowled the ultimate you-can’t-hit-me T20 ball—a tramline-hugging, back-of-the-hand slower ball full toss that floated and dipped at the last moment, beating the outstretched willow of Venkatesh Iyer. But umpire K Ananthapadmanabhan had already made up his mind that the delivery was illegal. He, though, was in a dilemma—whether it was a wide or a (waist-high) no ball? So he first called it a no-ball, sticking out just his right hand, as they would signal a no-ball. A split-second later, he changed his mind and reluctantly spread his other hand too. Ellis, already red-faced after getting smashed around, too was puzzled and sought the umpire’s clarification. A visibly angsty Ananthapadmanabhan could be heard rebuking him: “It’s a wide, it’s a wide, not a no-ball, not a no-ball.” He then turned his rage towards the non-striker, Nitish Rana, who wanted an answer to why a previous wide full-toss was not called a wide. “Because it was not wide,” he said firmly, before giving him a mind-your-own-business stare.

The distance from the striker’s crease to the Kolkata Knight Riders dugout is roughly 70m. Throughout the entire stretch of his 70m-trudge back to the hut, a devastated Rahul Tripathi kept rehearsing the slog-sweep that nipped his knock at 34 (yet another 30!). After every swipe of the muggy air, he would shake his head in dismay, hit his pads in anger, and then repeat the sequence all over again. Quick count: He repeated the failed shot at least six times, oblivious to even acknowledge the pat on his back by the incoming batsman, Nitish Rana. Next spotted: Tripathi with the video analyst, possibly dissecting the stroke. It was one of his staple strokes in this format, one from which he expects to clear the ropes nine times out of ten. But not this time, as he could not fully get underneath Ravi Bishnoi’s wrong’un. It left him cursing, cussing, and shadow slog-sweeping on a loop. You know the first shot he would look to execute the next time he hits the nets. A slog sweep.