A summary of Saturday’s third round matches in the FA Cup.

Arsenal and Everton required extra-time winners to reach the FA Cup fourth round on Saturday, while sixth-tier side Chorley beat a Derby County team severely weakened by a COVID-19 outbreak.

Mikel Arteta’s Arsenal were held scoreless for 90 minutes by Newcastle United and it took a super finish from Emile Smith-Rowe to break the deadlock 19 minutes into extra time, with Pierre-Emerick Aubameyang adding a second eight minutes later.

After 90 minutes the score at Goodison Park was level at 1-1 with Cenk Tosun’s first Everton goal since Nov. 2019 cancelled out by a 56th minute strike from lowly Championship (second-tier) side Rotherham’s American right back Matthew Olosunde. 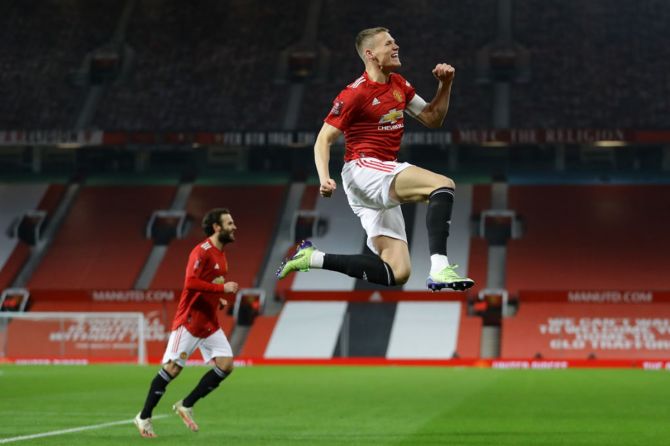 But three minutes into extra time the Premier League side got the decisive goal when substitute Doucoure latched onto Colombia playmaker James Rodriguez’s precise through ball before sliding it past helpless goalkeeper Jamal Blackman.

Manchester United got off to a great start when Scott McTominay headed them into a fifth-minute lead against Watford but little else went their way as they hung on to win 1-0 at Old Trafford.

In the absence of first-team players and interim manager Wayne Rooney, a youthful Derby County side were defeated 2-0 at National League North outfit Chorley.

The COVID-19 outbreak at Derby meant nine of the starting 11 were making debuts and the visitors fell behind when Connor Hall put Chorley ahead in the first half before Mike Calveley added a second in the 84th to secure a maiden fourth round berth. Premier League basement side Sheffield United celebrated their first win in all competitions in six months by coming out on top in a five-goal thriller at Bristol Rovers.

League One’s Bristol Rovers equalised for the second time through Max Ehmer in the 62nd minute at Memorial Stadium, only for United to make it 3-2 after 54 seconds through Jayden Bogle’s second goal in three matches.

The result ended a dismal run of form for Chris Wilder’s United, whose last win in a competitive game came on July 11 when they beat Chelsea in the Premier League.

Fellow Premier League strugglers West Bromwich Albion were also forced to the distance at Blackpool but Sam Allardyce’s side went down 3-2 on penalties.

James Justin’s sublime curling shot from the edge of the box found the top corner and set Leicester City on their way to an emphatic 4-0 victory over second-tier Stoke City.

Wycombe Wanderers, who are rooted to the bottom of the Championship, found the net three times in the opening 25 minutes and went on to claim a 4-1 win over fellow second division side Preston North End.

Luton Town beat Reading 1-0 in another all-Championship clash to reach the fourth round for the first time since the 2012-13 season thanks to midfielder George Moncur.