Images from the Champions League matches played on Tuesday night. 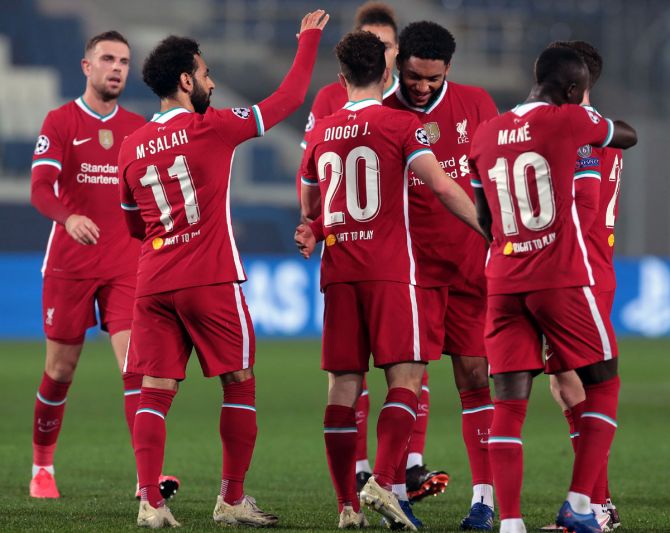 Liverpool striker Diogo Jota netted his first hat-trick for the club as they thrashed Atalanta 5-0 with a blistering performance in the Champions League on Tuesday to go five points clear at the top of Group D after three straight wins.

Atalanta’s mauling was the worst home defeat ever suffered by an Italian side against an English team in European competition and means Liverpool will qualify for the last 16 with a victory in the reverse fixture on Nov. 25.

Portugal forward Jota’s clinical treble continued the scintillating start to his Liverpool career, while Mohamed Salah and Sadio Mane also got on the scoresheet in a superb display from Juergen Klopp’s Premier League champions.

“It was the performance we needed tonight, just because the opponent is really strong and can cause you massive problems, and my boys played an incredible game. The front line defending and attacking, outstanding,” Klopp told BT Sport.

The victory put Liverpool, who won the Champions League in 2005 and 2019, top of the group with nine points from three games. Ajax Amsterdam are second with four, ahead of Atalanta on goal difference, after a 2-1 win at FC Midtjylland.

Jota wasted an early chance before giving Liverpool the lead in the 16th minute, latching on to a pass from Trent Alexander-Arnold and holding off Jose Luis Palomino before delicately flicking the ball past keeper Marco Sportiello.

Jota, who arrived from Wolverhampton Wanderers for a reported fee of 41 million pounds ($54 million) in September, made it 2-0 in the 33rd minute, controlling a raking pass from Joe Gomez with his left foot before firing home with his right.

With the home side reeling, Salah scored a super solo goal two minutes into the second half, collecting a clearance from Andy Robertson and running from the halfway line before curling the ball into the net at the far post.

Minutes later it was Mane’s turn as he made it 4-0 with a sublime chipped finish before Jota completed his hat-trick with another coolly-taken effort in the 55th for his seventh goal in his first 10 appearances for Liverpool.

Atalanta’s best chances on the night fell to Duvan Zapata, who clipped the underside of the crossbar with a curling strike. He twice tested Liverpool goalkeeper Alisson with stinging shots and also had a stoppage-time effort ruled out for offside.

Salah almost scored a sixth for Liverpool in the 83rd minute. Once again he ran half the length of the pitch after an Atalanta corner was cleared, but this time his shot was steered out for a corner by Sportiello. 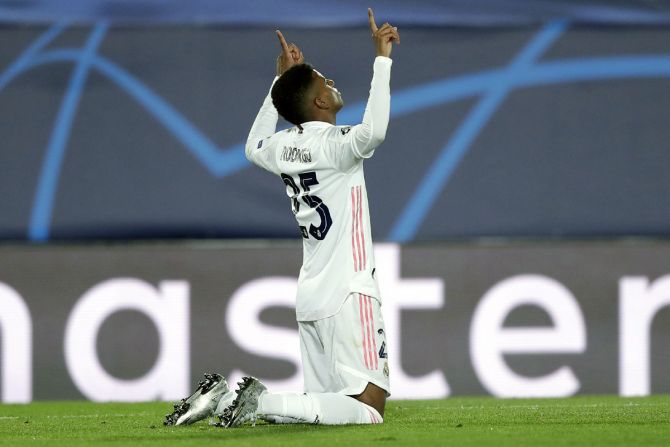 Real Madrid boosted their chances of reaching the Champions League knockout stages after a late winner by substitute Rodrygo gave them a 3-2 home victory over Inter Milan in an absorbing Group B clash on Tuesday.

The result left Real, winners of a record 13 titles in Europe’s premier club competition, level on four points with Shakhtar Donetsk, one point behind leaders Borussia Moenchengladbach and two ahead of bottom placed Inter.

Real had thrown away a two-goal lead and were flirting with a defeat which would have piled more pressure on manager Zinedine Zidane before their Brazilian duo of Vinicius Junior and Rodrygo combined to save the day.

Chances had gone begging at either end before Karim Benzema gave the home side a 25th-minute lead, rounding goalkeeper Samir Handanovic and slotting home after intercepting a dreadful back pass by Real’s former wing-back Achraf Hakimi.

The hosts seemed to be cruising after 33 minutes when Sergio Ramos headed their second — his 100th goal for the club in all competitions — but Lautaro Martinez pulled one back for Inter two minutes later thanks to a sublime assist by Nicolo Barella.

Real were rattled when Ivan Perisic equalised midway through the second half, threading a shot into the far corner from close range after Martinez headed the ball into the Croatian’s stride.

Inter then missed a pair of gilt-edged chances as Martinez shaved the outside of the post with a shot from the edge of the area and Perisic fired wide, with Real’s defence in tatters.

The Italians were punished for their misses, however, as Vinicius Junior and Rodrygo, brought into the fray together by Zidane shortly before Inter’s equaliser, carved out the winner from a lightning fast break.

Vinicius Junior raced clear of his marker down the left flank and squared the ball back to Rodrygo, who beat Handanovic with an unstoppable shot into the top corner from 10 metres.

Inter are now under pressure halfway through the group stage to turn their fortunes around and will hope to have striker Romelu Lukaku back for the reverse fixture on Nov. 25 after the Belgium striker missed the match with a thigh injury. 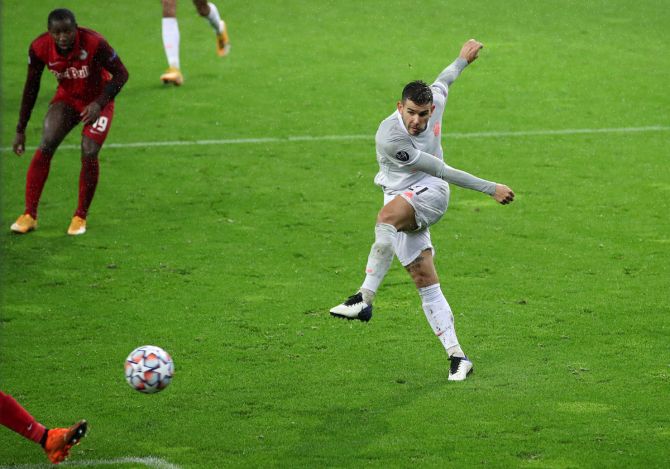 Bayern Munich came from behind to crush RB Salzburg 6-2 with two goals from Robert Lewandowski on Tuesday, stretching their record winning run in the Champions League to 14 consecutive games and leading their group by five points after three games.

The Bavarians, who have won five titles in 2020 including the Champions League, went behind after only four minutes when Mergim Berisha was left completely unmarked inside the box to beat goalkeeper Manuel Neuer.

Bayern instantly bounced back and Serge Gnabry had his shot cleared off the line before their top scorer Lewandowski levelled with a 21st minute penalty.

Salzburg defender Rasmus Kristensen then turned a Thomas Mueller cross into his own net a minute before the break.

The hosts came close to an equaliser right after the restart but Neuer got his fingertips to Enock Mwepu’s shot to turn it wide. The Bayern keeper was beaten in the 66th minute, however, when Masaya Okugawa fired Salzburg level.

Despite a string of chances for the home side, it was Bayern who scored again in a strong finish with Jerome Boateng powering in a header from Joshua Kimmich’s corner in the 79th and Leroy Sane scoring with a perfectly curled shot four minutes later.

Lewandowski headed his second goal in the 88th and Lucas Hernandez drilled in a sixth in stoppage time to lift Bayern to nine points in Group A ahead of second-placed Atletico Madrid.

Lokomotiv Moscow, who drew 1-1 at home to Atletico, are third on two, with Salzburg in last place on one. 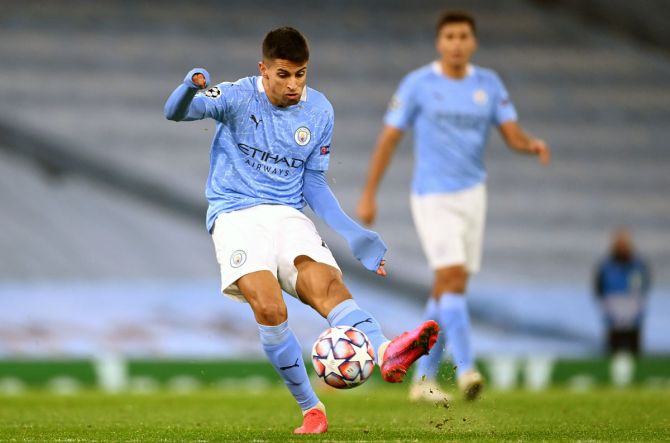 Ferran Torres, Gabriel Jesus and Joao Cancelo were on target as Manchester City made it three wins out of three in Champions League Group C with a 3-0 win over Olympiakos at the Etihad Stadium on Tuesday.

The result leaves City three points clear of Porto at the top of the group, and a single point in the return fixture on Nov. 25 would secure progress for City to the knockout stage.

Torres put City ahead in the 12th minute, playing a smart one-two with Kevin De Bruyne before confidently slotting home for his third goal in as many games in the competition.

Raheem Sterling had the ball in the net in the 32nd minute, but his effort was ruled out for offside, as City dominated play. But the Greek side grew into the game after the break.

The visitors should have drawn level in the 55th minute when a sloppy pass from Phil Foden fell to Mathieu Valbuena, but the 36-year-old French winger miscued his shot.

While Olympiakos rarely threatened, City needed another goal to ease their nerves and it came from substitute Gabriel Jesus in the 81st minute, the Brazilian hammering a shot in from close range at the near post after being slipped in by De Bruyne.

Defender Joao Cancelo made sure of the points in the 90th minute, which leaves City in a commanding position at the top of the group, with a well-placed shot from outside of the area.

City now face Liverpool in the Premier League on Sunday, and Guardiola used all five subs in the second half, perhaps with half an eye on that clash with the league champions.

“In the first half we played really well. In the second half we struggled for some moments but when we scored the second one it was over,” said Guardiola.

“We have five days to recover for Liverpool and then the international break. The forecast in the next three days says it will be sunny in Manchester. It’s rare. We’re going to recover and have a day off. After that on Friday and Saturday we’ll prepare for the Liverpool game. But the players need a break,” he added.

Olympiakos coach Pedro Martins was upset with the way his team had played in the early stages of the game.

“I am very disappointed with our game in the first half. We looked frightened, didn’t go after the ball, we respected our rivals too much – we only committed one foul.

“But in the second half we played like Olympiakos. We were better, got more possession and found ourselves.”