Images from Tuesday’s IPL match between Mumbai Indians and SunRisers Hyderabad, in Sharjah.

Sandeep Sharma continued his fine run with the ball, taking three crucial wickets as SunRisers Hyderabad restricted Mumbai Indians to 149 for 8 in the IPL match in Sharjah on Tuesday.

He put the SunRisers, who must win this match to qualify for the play-offs, high in the saddle, having Mumbai Indians reeling at 39 for 2 in the powerplay with the scalps of captain Rohit Sharma (4) and Quinton de Kock (25) in his pocket. Later, he dismissed Ishan Kishan (33) to finish with figures of 3 for 34 in his four overs.

Thanks to Kieron Pollard’s 25-ball 41 the defending champions were able to put up a fighting total after collecting 51 runs from the last five overs.

Rohit, who missed the last four games due to a hamstring injury, made a surprise return in his team’s last game ahead of the play-offs. However, he lasted for only seven balls as pacer Sandeep Sharma (3/34) had him caught at mid-off with a well-disguised knuckle ball. 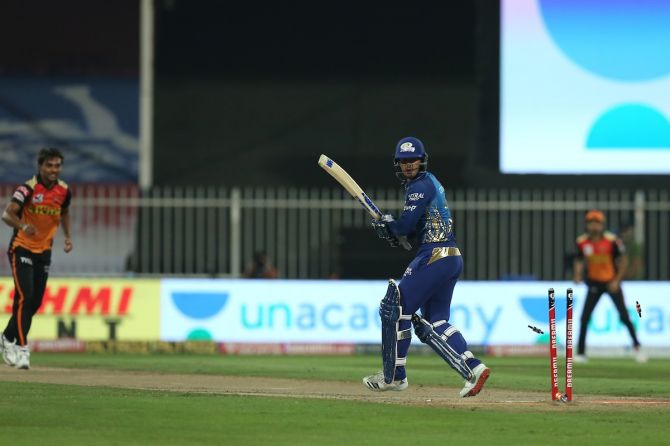 Sandeep also found the stumps of Rohit’s opening partner Quinton de Kock (36 off 29), who played on after smashing the pacer for couple of sixes and a boundary.

It was the turn of spinners Rashid Khan (1/32) and Shahbaz Nadeem (2/19) to provide SunRisers wickets in the middle-overs. 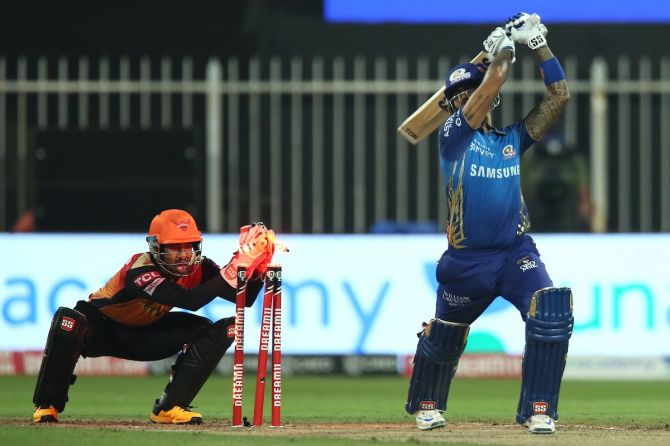 Nadeem got rid of the in-form Suryakumar Yadav (36) and Krunal Pandya (0) in the 12th over and then Rashid removed Saurabh Tiwary in the following one to reduce Mumbai to 82 for 5.

Just when the partnership between Ishan Kishan (33 of 30) and Pollard was looking dangerous, Sandeep removed the former to tighten the screws on the opposition.

However, Pollard came to his team’s rescue yet again with a valuable cameo. He hammered four sixes, three of which were in the penultimate over, bowled by death overs specialist T Natarajan.

West Indian all-rounder Jason Holder also produced a tidy spell to finish with the wickets of Pollard and Nathan Coulter-Nile for 25 runs from his four overs.