Images from the World Athletics Championships in Eugene, Oregon, on Thursday, Day 7.

Noah Lyles produced a dominating performance to defend his 200 metres title at the World Championships on Thursday and lead an American podium sweep ahead of Kenny Bednarek and Erriyon Knighton.

Tokyo bronze medallist Lyles led at the halfway point and exploded through the finish to win in 19.31, becoming the third fastest athlete of all time over the distance, ripping his shirt open after the finish as the home crowd in Eugene, Oregon, roared with approval.

Olympic silver medallist Bednarek battled shoulder to shoulder with Knighton off the turn and got the better of the 18-year-old down the straight. 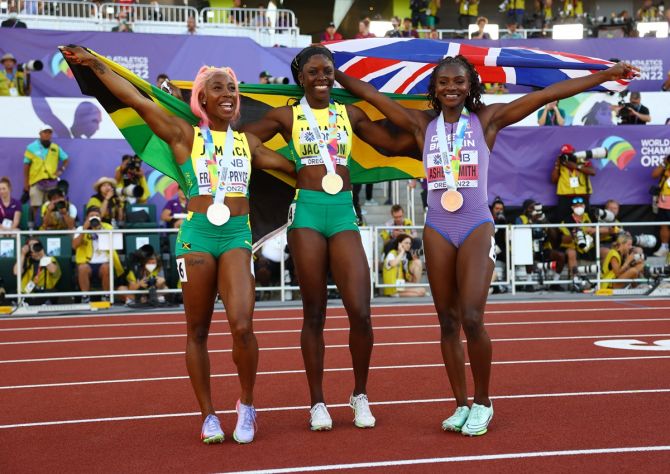 Jamaica’s Shericka Jackson became the fastest woman alive over 200 metres on Thursday when she scorched to a brilliant world title in 21.45 seconds, a time bettered only by American Florence Griffith-Joyner in 1988.

It was an incredible run by Jackson, edging her ahead of double Olympic sprint champion Elaine Thompson-Herah in the all-time list and closing in on Griffith-Joyner’s 21.34 from the Seoul Olympics.

It also gave her a measure of satisfaction after her painful experience in the Tokyo Olympics when she eased up too early in the 200m heats and failed to go through when highly fancied for a medal.

Fraser-Pryce, who won the world 200 title in 2013, got her usual blistering start and the 35-year-old led coming off the bend before Jackson hit full stride and pulled clear to drive home.

“They pushed me and I’m so grateful – a championship record, a personal best,” said Jackson, 28, who has a bagful of individual minor medals, including a silver in the 100m in Eugene last weekend.

Aminatou Seyni was fourth for Niger, ahead of American duo Abby Steiner and Tamara Clark, with Thompson-Herah seventh. 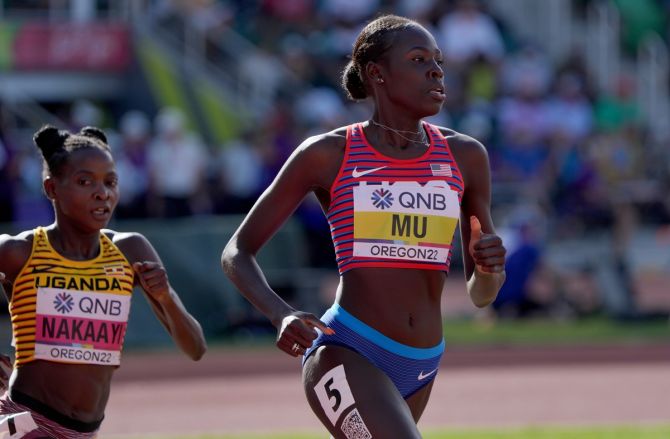 In a World Championships already boasting some notable clean sweeps, the United States remained in the hunt for a first 1-2-3 in the women’s 800 metres after their big three, led by Olympic champion Athing Mu, advanced from Thursday’s heats.

Mu, Raevyn Rogers and Ajee Wilson all looked good, while Kenya’s Mary Moraa and Tokyo Olympic silver medallist Keely Hodgkinson of Britain, the only other athletes to have gone under 1:58s this season, also went through on a warm, humid night.

Mu, 20, has enjoyed a stellar first half of the season, albeit with her best time two seconds down on her 1:55.04 seconds personal best set on the same Hayward Field track almost a year ago.

“The focus coming here was just to be consistent,” she said. “I think the main goal is definitely to get gold because we are here on the U.S. soil and who deserves more gold?

“Tactically if I feel that it is better for me to go to the front, I’ll do that. If it is not, I will just stick back. It will depend on only how I am feeling.” 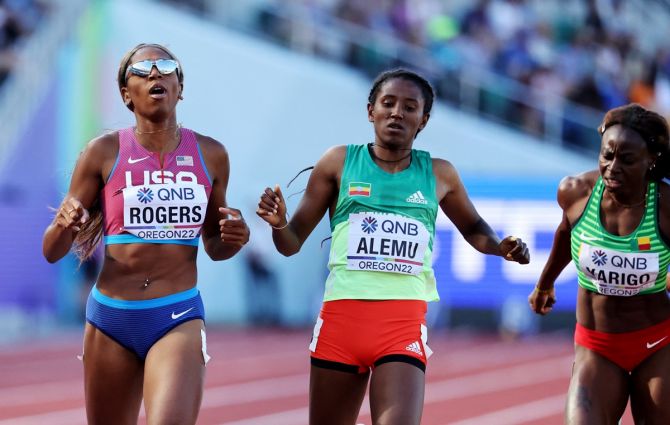 Rogers, who has a World silver and Olympic bronze to her name, left things a little late before a surge secured her place, while Wilson, third in the last two World Championships, looked assured.

Defending champion Halimah Nakaayi of Uganda also went through, second behind Mu in a slowly-run heat, while Ethiopia’s Diribe Welteji was the fastest of the qualifiers in 1:58.83.

The semi-finals are on Friday with the final on the last night of action on Sunday.

The 800m is an event right at the heart of the debate over athletes of differences of sexual development (DSD), with many of its best performers of the last decade, including multiple World and Olympic champion Caster Semenya, now not allowed to run.

Their increased testosterone levels means they cannot compete in anything from 400m to a mile unless they take hormone suppression medication.

The all-time list is also skewed by the presence of DSD athletes and as well as several from former Eastern Bloc countries with dark doping histories, with the world record dating back to 1983.