Deepak Chahar led a dominant display by Chennai Super Kings as they humbled Punjab Kings by six wickets in the Indian Premier League match, at the Wankhede stadium in Mumbai, on Friday.

The medium pacer came up with a superb opening spell as the Chennai bowlers justified skipper Mahendra Singh Dhoni’s decision to bowl first.

He returned impressive figures of four for 13 from his four overs’ spell, which included 18 dot balls, to have Punjab Kings reeling at 26 for 5 by the seventh over before they finished with a below-par 106 for 8.

Tamil Nadu power-hitter Shahrukh Khan was the only Punjab batsman to make a notable contribution, scoring 36-ball 47, which included 4 fours and 2 sixes, before falling to Sam Curran in the final over. 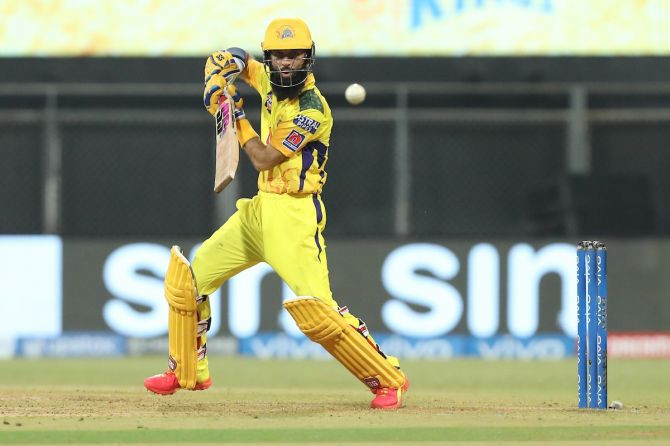 Defending the modest target, Moeen Ali scored 46, while Faf du Plessis remained unbeaten on 36 as Chennai Super Kings got home in 15.4 overs to register their first victory in two outings.

Ali opened up after a rather cautious start, and played some lovely drives, also hitting a big six, before he was caught by Shahrukh Khan in the deep off leggie Murugan Ashwin (1/32) with CSK needing 17 runs for victory. With the target well within reach, Chennai lost the wickets of Suresh Raina (8) and Ambati Rayudu (0) to Shami (2/21) off consecutive deliveries in the 15th over, but it hardly mattered.

Mohammed Shami was the pick of the Punjab bowlers with figures of 2-21.

Mahendra Singh Dhoni, in his 200th match for Chennai Super Kings, won the toss and chose to bowl.

The former champions retained the same eleven that lost to Delhi Capitals by seven wickets in their opening match.

Punjab Kings also retained the eleven that scored a four-run win over Rajasthan Royals in a high-scoring thriller. K L Rahul and Mayank Agarwal opened the innings for Punjab Kings while medium pacer Deepak Chahar was handed the responsibility of sending down the first over for Chennai.

It was a disastrous start for Punjab Kings as Agarwal was bowled by Chahar for a duck. The opener was beaten all ends up by a brilliant out-swinger, which swerved away and crashed into the stumps.

Agarwal was out for a duck and Punjab Kings 1 for 1 after four deliveries.

It could have been two wickets for Chahar, but Chris Gayle was dropped by Ruturaj Singh at backward point off the sixth. Gayle scored back-to-back boundaries in Chahar’s second over, but a hesitant single by the West Indian saw CSK bag their second wicket, Ravindra Jadeja effecting the run-out of Rahul with a direct hit from backward point off the fifth delivery of the third over.

Chahar picked his second wicket in his third over, dismissing Gayle. The swashbuckling batsman scooped the second delivery of the fifth over only to find Jadeja take a superb catch at short cover. Gayle was gone for 10 off 10 balls.

Nicholas Pooran, the new batsman in, left the first delivery he faced alone but fell to the next.

The West Indian holed out to Shardul Thakur and was out for a duck, giving Chahar his third wicket and CSK their fourth. With Chahar keeping it tight and getting the wickets, Dhoni made him complete his quota of overs. And, as Dhoni expected, he struck again with his second delivery of his fourth over!

Hooda chipped the ball to mid-off and Faf du-Plessis took an easy catch. Hooda was out for 10 off 15 balls and Punjab Kings were reeling at 26 for 5 in the seventh over.

Shahrukh Khan and Jhye Richardson steadied the innings a bit, guiding the Kings to 48-5 in ten overs. In his bid to go for big runs, Richardson went through the shot a little early and was out for 15 off 22 balls. After 15 overs Punjab Kings were 73 for 6. Shahrukh did well to boost the scoring and guided the side to 81 for 6 after 16 overs.

A change in bowling saw Dwayne Bravo into the attack and the West Indian struck, having Ashwin (6 off 14 balls) caught by Faf du Plessis off the fifth ball of the 17th over.

At 87 for 7 the Kings were looking down the barrel.

They brought up the hundred of the innings in the 19th over before Shahrukh was out for 47 off 36 balls, including four fours and two sixes.

Going for a big hit against Sam Curran, he miscued and it to deep mid-wicket and Jadeja made no mistake with the offering.

Mohammed Shami was unbeaten on 9 off 12 balls with Riley Meredith (0) as Punjab Kings ended up with 106 for 8 from their 20 overs.