Manchester City came from behind twice to earn a 2-2 draw with Liverpool in a pulsating Premier League encounter at Anfield. 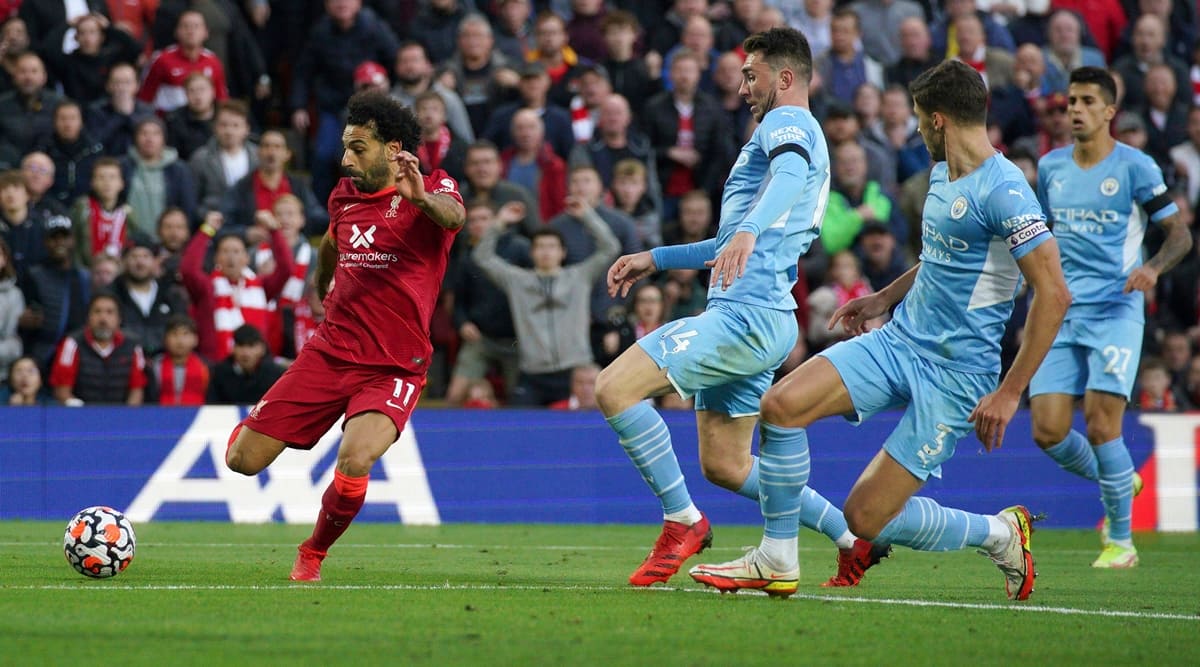 Manchester City came from behind twice to earn a 2-2 draw with Liverpool in a breathless and pulsating Premier League encounter at Anfield on Sunday.

All four goals came in a second half packed with the high quality, high-tempo, end-to-end football that makes the Premier League so popular globally.

Sadio Mane had put Liverpool ahead before Phil Foden equalised only for Mohamed Salah to restore the home side’s advantage with a wonderful solo goal.

But Kevin De Bruyne’s 81st minute equaliser ensured the teams shared the points and left Liverpool in second place on 15 points, one behind leaders Chelsea.

“What a game. That’s the reason (over) the last years Man City and Liverpool are always there because we try to play in this way. Unfortunately we couldn’t win – but we didn’t lose,” said the Spaniard.

“That’s why the Premier League is the best. It was great, really great.”

City will look back with regret on their failure not to make more of their first half domination when the visitors toyed with Juergen Klopp’s side for the 20 minutes before the interval.

James Milner, filling in for Trent Alexander Arnold at right-back, had a torrid half, faced with Phil Foden and Jack Grealish and receiving little help from his team mates.

A remarkable piece of dribbling from Bernardo Silva created a chance for Foden in the 21st minute but his shot was straight at Alisson who parried the ball.

City felt they should have had a penalty when Milner appeared to push Foden in the back but the appeal was waved away by referee Paul Tierney – the first of a series of decisions which infuriated Guardiola.

Foden was causing Liverpool constant problems and De Bruyne should have found the target with a diving header from his cross to the back post.

Somehow Liverpool survived to the break without conceding and they came out for the second half determined to shift the momentum in the game.

They did just that when they grabbed the lead in the 59th minute as Salah skipped away from Joao Cancelo and threaded the ball into the path of the sprinting Mane who confidently fired past goalkeeper Ederson.

But City were level 10 minutes later when Gabriel Jesus cut in from the right, taking four Liverpool defenders out of the game, before finding Foden who drilled the ball into the far, bottom corner of the net.

Neither side were in the mood to settle for a point with the home fans roaring their team on and City sensing there were more opportunities to come.

The goal that restored Liverpool’s lead was one of rare quality – Salah twisting and turning into the box to lose Cancelo and Aymeric Laporte before firing home, the Egyptian showing the deft touch, sharp movement and clinical finishing that have made him such a crowd favourite.

But once more City responded, the influential Foden again finding space on the left but, this time, cleverly pulling the ball back to the edge of the box for Kevin De Bruyne whose curling shot took a slight deflection off Joel Matip and beat Alisson.

There was still time for an outstanding piece of defending from City midfielder Rodri, whose superb block kept out a goal-bound effort from Fabinho after Ederson had dropped a cross.