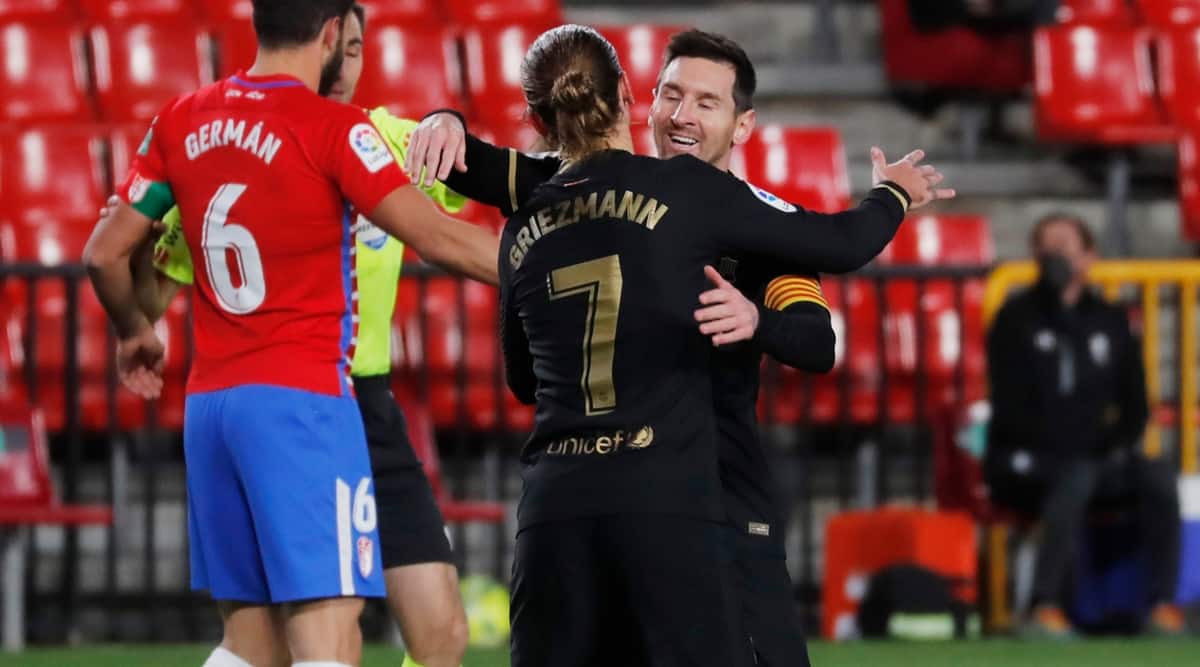 First, it was Pedro “Pedri” Gonzalez shining with his assists. Then the injury-prone Dembele Ousmane earned a spot in the attack. Now the oft-maligned Antoine Griezmann is back to scoring goals.

All in all, Barcelona is slowly showing signs this season might not be a wash after all.

Griezmann scored a brace and set up Lionel Messi for one of the Argentine’s two goals on Saturday to lead Barcelona to a 4-0 win at Granada.

Barcelona’s first three-match winning run in the league under Ronald Koeman put it four points behind leader Atletico Madrid, whose home game scheduled for Saturday against Athletic Bilbao was postponed due to a blizzard that has shut down the capital and made transit almost impossible through much of central Spain.

Second-placed Real Madrid was one point behind Atletico after being held at Osasuna to 0-0 in a match played in steady snowfall and with barely any scoring chances for either side.

Atletico has three more games to play than its top title rivals.

Griezmann got Barcelona started with his first goal in nearly a month in the 12th minute when a pass by Sergio Busquets was deflected to him by a Granada defender.

Griezmann set up Messi to double the lead with a left-footed shot from the edge of the area in the 36th.

Messi got his league-leading 11th goal in the 42nd when he drove a free-kick under two players who jumped in the defensive barrier. It was his first goal from a free-kick this season.

Griezmann rounded off the big win in the 64th when he beat goalkeeper Rui Silva from a tight angle after Dembele played him clear with a lobbed pass.

Granada played the last 12 minutes minus Jesus Vallejo, who was sent off for fouling Martin Braithwaite with only Silva to beat. Braithwaite had gone on in the 65th to give Messi a rare bit of rest with the game well in hand for the visitors.

Madrid’s only decent chance to breaking down Osasuna’s disciplined defense was Marco Asensio’s shot from distance early in the second half that goalie Sergio Herrera did well to parry.

Osasuna used heat lamps to melt snow and ice off the turf and deployed a platoon of workers to shovel the field before the match, leaving only a dusting of snow.

Kroos said the wintry conditions “are not an excuse since both teams played on the same pitch.”

But Madrid coach Zinedine Zidane said the match should have been postponed given the travel difficulties. Madrid’s plane was delayed for several hours at the capital’s airport on Friday before taking off. The airport closed down shortly after and will remain shut until Sunday at least.

“We were waiting yesterday (in the plane), and again today we had to wait, but at the end they decided to play,” Zidane said. “We didn’t see a soccer match today. We have no idea when we will be able to go back home.”

Youssef En-Nesyri scored a hat trick for Sevilla to beat Real Sociedad 3-2 in a thriller that featured four goals in the opening quarter of an hour.

Sevilla drew level on points in the standings with Real Sociedad, which was ahead on goal difference in fifth place. Sevilla, in sixth, also has three games in hand.

En-Nesyri’s second goal in the seventh minute was the best, a work of beauty. The Morocco striker dribbled past three defenders before beating the Sociedad goalkeeper with a low strike.