Third-placed Napoli, which earlier beat relegation-threatened Torino 2-0, has the same amount of points as Juventus and Milan, which dropped to fifth. Second-placed Atalanta has two points more. Joaquín Correa scored twice as Lazio beat AC Milan 3-0 in Serie A on Monday to boost its chances of qualifying for the Champions League.

Correa scored his first after just 77 seconds and doubled his tally in the 51st minute. Ciro Immobile completed the scoring three minutes from time. Lazio closed to within five points of fourth place and the final Champions League berth, having played a match less than the teams above it.

“The lads were really great, it was a final for us,” Lazio coach Simone Inzaghi said. “It was our last hope to stay in touch with the top four.

“We usually play finals in this way, it was a clear and overwhelming victory.”

Third-placed Napoli, which earlier beat relegation-threatened Torino 2-0, has the same amount of points as Juventus and Milan, which dropped to fifth. Second-placed Atalanta has two points more.

Head-to-head record is the first deciding factor in Serie A, followed by goal difference.

“I expected more from my team,” Milan coach Stefano Pioli said. “We have the technical and physical quality to do better. We must do more, now we must show that we are as strong as I think we are. We need to react immediately because this is a heavy defeat.

“The Champions League race has become a lot more difficult.”

Milan was looking to move back into second place but was without top scorer Zlatan Ibrahimović and got off to the worst possible start when Correa played a quick one-two with Immobile, rounded Gianluigi Donnarumma and deposited into the empty net.

It was Lazio’s quickest goal in Serie A since statistics supplier Opta started collecting that data in 2004.

Correa almost doubled his tally immediately but Donnarumma pulled off a fantastic save to deny him at point-blank range.

Napoli goalkeeper Pepe Reina also performed in the first half and his side doubled its lead six minutes after the break when Correa burst into the area, rode an attempt at a tackle from Milan defender Fikayo Tomori and blasted into the roof of the net.

Immobile’s lob hit the post 10 minutes from time but the Italy forward got on the scoresheet seven minutes later when Lazzari rolled the ball across to him and he drilled it into the bottom left corner.

Napoli moved back into the Champions League places in Serie A and could have scored more in a dominant victory.

Two goals in as many minutes from Tiémoué Bakayoko and Victor Osimhen had Napoli firmly in control by halftime. The visitors also hit the post twice, while Torino midfielder Rolando Mandragora was sent off four minutes from time for a second yellow card.

Torino remained above the relegation zone thanks only to a better head-to-head record against 18th-placed Benevento, although it has played a match less than the teams around it.

Napoli got off to a great start when Bakayoko curled a stunning strike into the far bottom corner from 20 yards out.

The lead was doubled following a rapid counterattack. Osimhen sprinted from just inside his own half and his effort was deflected past Torino goalkeeper Salvatore Sirigu. 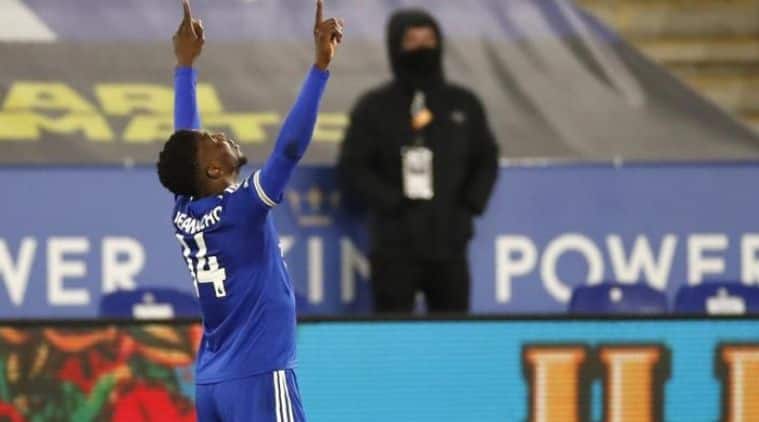 Kelechi Iheanacho extended his career-best scoring form with a blistering winning goal as Leicester rallied to beat Crystal Palace 2-1 in the English Premier League and establish a seven-point cushion in the top four on Monday.

The Nigeria striker made it 14 goals in his last 14 games in all competitions — and brought Champions League qualification one step closer for Leicester — when he brought down a long ball forward from Jonny Evans, cut inside and smashed a rising shot with little back-lift inside the near post in the 80th minute.

Iheanacho had earlier set up Timothy Castagne for the 50th-minute equalizer, which canceled out Wilfried Zaha’s opening goal for Palace, and is proving to be a revelation in the second half of the season after coming into the team in February because of injuries to teammates Harvey Barnes and James Maddison.

It is his first lengthy stint in the starting lineup since joining from Manchester City in the offseason of 2017 and he is even outshining strike partner Jamie Vardy, for so long the team’s talisman and most likely scorer.

“When you have confidence in your game, it makes you perform really well,” said Iheanacho, who has 12 goals in his last nine games. “It gives you a base. When you score a goal, it gets your mind high, it keeps coming and you keep scoring.”

The brilliant finish, which saw Iheanacho shift the ball onto his favored left foot and shoot before the defender and goalkeeper in front of him were set, came as no surprise to Leicester goalkeeper Kasper Schmeichel. He described Iheanacho as a “nightmare in training” because of his intelligent finishing and said he has “everything to be a top striker.”

“Having a massive figure like Jamie Vardy in front of you, in the system we were playing, was always going to be difficult for him,” Schmeichel said. “But credit to him, every day since he’s come, he works so hard and he just needed that bit of luck or that goal to go in to give him that confidence, that belief.”

Iheanacho’s hot streak could push Leicester over the line in the race for Champions League qualification, too.

The win cemented third place for Brendan Rodgers’ team, which is four points ahead of Chelsea in fourth and seven clear of West Ham in fifth. Liverpool is a point further behind, with all four teams having five games to play.

Leicester faded away badly at the end of last season to drop out of the top four on the final weekend. That doesn’t look like happening this time, with a second year in the Champions League — after 2016-17 — looking likely even after a grueling season that included a Europa League campaign.

Rodgers spoke openly about the team’s poor finish to last season in a preseason chat with his players, determined for it not to be an “elephant in the room.”

“You sense that might have lingered about if we didn’t address it,” Rodgers said. “Over that preseason period, we went away for a couple of days, we spoke about it and took on the challenge for the current season.”

Evans’ raking pass forward for Iheanacho’s winning goal wasn’t his only significant moment of the match. In the 55th minute, with the score tied, he produced a stunning clearance to deny Christian Benteke a tap-in to an unguarded net after Jaïro Riedewald broke the offside trap.

Leicester’s win left Liverpool with even slimmer hopes of qualifying for the Champions League, just a year after Jurgen Klopp’s team won the league for the first time in 30 years.

With Leicester eight points ahead, Chelsea — which is within four points — is the only team Liverpool can realistically reel in now.