Images from the IPL match between Royal Challengers Bangalore and Delhi Capitals, in Ahmedabad, on Tuesday.

A B de Villiers rallied Royal Challengers Bangalore after the loss of their top three batsmen early to a fighting 171 for 5 in the Indian Premier League match against Delhi Capitals, in Ahmedabad, on Tuesday.

The experienced South African scored an unbeaten 75 from 42 balls, which included five sixes and three fours, as RCB turned things around from a precarious 60 for 3 in the ninth over.

He took 23 runs in the last over, bowled by Marcus Stoinis, as 56 runs were garnered in the last five overs.

Rajat Patidar (31) and Glenn Maxwell  (25 off 20 balls) also made valuable contributions after Virat Kohli (12) and Devdutt Padikkal (17) perished before the end of the powerplay over, which yielded just 36 runs.

Delhi Capitals won the toss and elected to bowl. They included Ishant Sharma in place of Ravichandran Ashwin, who has taken a break from IPL 2021 to be with his family, which is ‘putting up a fight against COVID-19’. 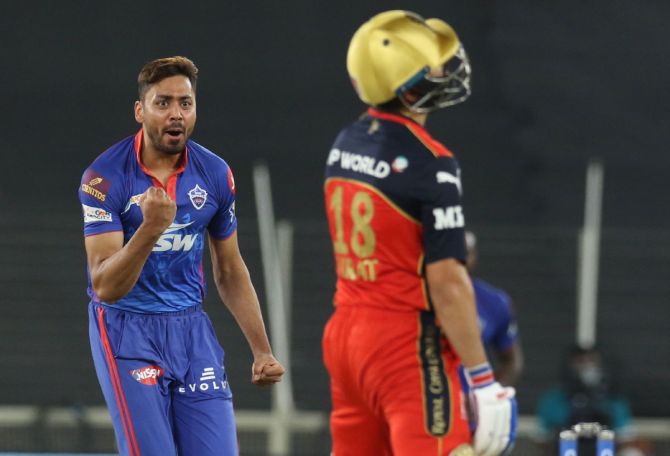 Ishant Sharma opened the bowling for Delhi Capitals, while Virat Kohli and Devdutt Padikkal got the RCB innings underway. The pair started well, getting 6 from the first over, 10 from the next, bowled by Kagiso Rabada, and 9 from Ishant’s second over to take RCB 25 without loss after three.

But right-arm pacer Avesh Khan ended the partnership, dismissing Kohli with the sixth delivery of his first over.

RCB’s skipper tried to guide a good length delivery from Khan to third man but only got an inside edge, which crashed into the stumps. 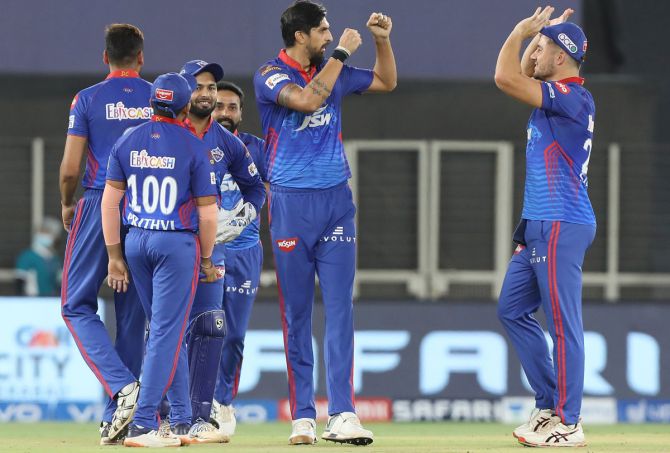 Delhi tasted another success immediately, as Ishant had Padikkal bowled. The batsman was surprised by the speed of the delivery, which nicked back on a good length and rattled off-stump.

It was a wicket maiden for Ishant, whose figures read 3-1-15-1 at the end of the fifth over.

All of a sudden the Royal Challengers had two new batsmen in Rajat Patidar and Glenn Maxwell at the crease.

Maxwell hit a four off Khan as RCB ended the powerplay with 36 for 2.

The Aussie then got a six off leg-spinner Amit Mishra in the next over and another off Axar Patel in the eighth to get the Royal Challengers going. 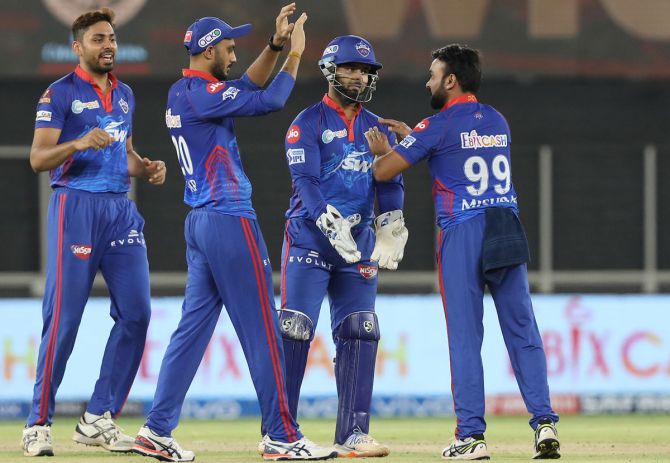 The wily Mishra, however, ended Maxwell’s innings with the third delivery of his second over, having him caught by Steven Smith.

Maxwell tried to hit the leggie from wide of off-stump and holed out to his countryman at long-on.

Maxwell was out for 25 off 20 balls, which included a four and 2 sixes, and Delhi bagged another big wicket as RCB were in a spot at 60-3 in the ninth over.

At the half-way stage they were 68 for 3, with a lot to be done in the remaining ten.

Could AB de Villiers, who replaced Maxwell, and Patidar come up with something special?

They did. They went after the Delhi bowlers. The South African launched Axar, bowling his fourth over, over long-off for a six and went past 5000 runs in IPL in his 139th match. 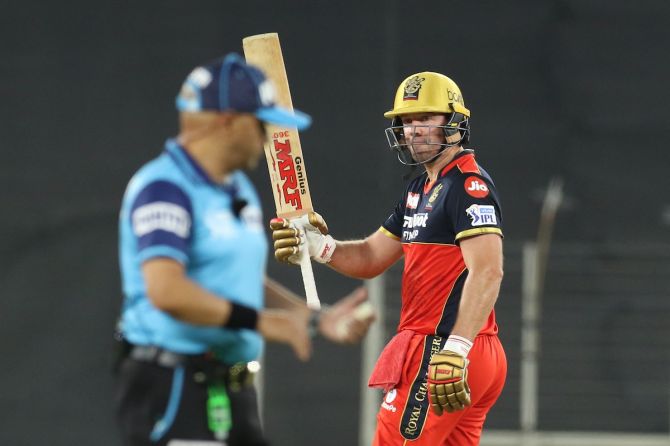 The six also brought up the 50-run stand between the two off 36 balls for the fourth wicket.

However, Axar ended the flourishing partnership after just four more runs were added. Patidar went for a big hit and was caught by Smith at long-on.

Washington Sundar, the new-man in, faced just 9 balls as de Villiers did all the scoring before Rabada had him caught and bowled for 6. RCB were 139-5 in the 18th.

DeVillers then posted his 40th IPL 50, hitting the penultimate delivery of Khan’s spell in the 19th over for four.

Delhi took a gamble of handing the responsibility of bowling the last over to Marcus Stoinis. The Aussie, in his first over, started off with a wide and De Villiers took two runs off the resultant free-hit.

The South African then hit a six. A dot ball followed before he hit another two sixes and two off the final delivery.

De Villiers finished unbeaten after a splendid 75 off 42 balls, including five sixes and three fours.