Images from Saturday’s IPL match between Mumbai Indians vs SunRisers Hyderabad, in Chennai.

Kieron Pollard produced a late assault to propel Mumbai Indians to fighting total against SunRisers Hyderabad in the IPL match, at the M A Chidambaram stadium, in Chennai, on Saturday.

The burly West Indian made the most of a ‘life’ in the penultimate over to hit two towering sixes off the last two deliveries of the final over and finish unbeaten with 35 off 22 balls as Mumbai Indians posted 150 for 5 in their 20 overs.

Vijay Shankar and Mujeeb-ur Rahman excelled with the ball as SunRisers Hyderabad produced a disciplined bowling performance after the opening duo of Rohit Sharma (32 off 25) and Quinton de Kock (40 off 39) scored 53 in the powerplay.

Vijay had figures of 2 for 19, while the Afghanistan spin duo of Mujeeb and Rashid Khan finished with 2 for 29 and 0 for 22 respectively. Earlier, Rohit completed 4000 T20 runs and also surpassed Mahendra Singh Dhoni’s record of the most sixes by an Indian in the IPL.

The 33-year-old now has 217 IPL sixes, one ahead of Dhoni. He occupies third place in the overall list, behind Punjab Kings’s Chris Gayle (351) and Royal Challengers Bangalore’s AB de Villiers (237). Quinton de Kock and Rohit opened the batting for the defending champions while Bhuvneshwar Kumar sent down SunRisers’s first over.

Rohit and de Kock gave Mumbai a good start, bringing up the 50 of the innings in the sixth over. The change worked instantly as Shankar dismissed Rohit, who was showing ominous form.

The Mumbai Indians captain went for the slog but failed to middle the ball and was caught at deep mid-wicket by Virat Singh. He was out for 32 off 25 balls and Mumbai reduced to 55 for 1 in the seventh over.

Suryakumar Yadav, the new man in, hit Shankar for an inside-out six, but perished to the third delivery of the ninth over, offering a soft return catch to the bowler.

Yadav was out for 10 off six balls as Shankar claimed his second wicket and Mumbai Indians were 71 for 2 in the ninth over. 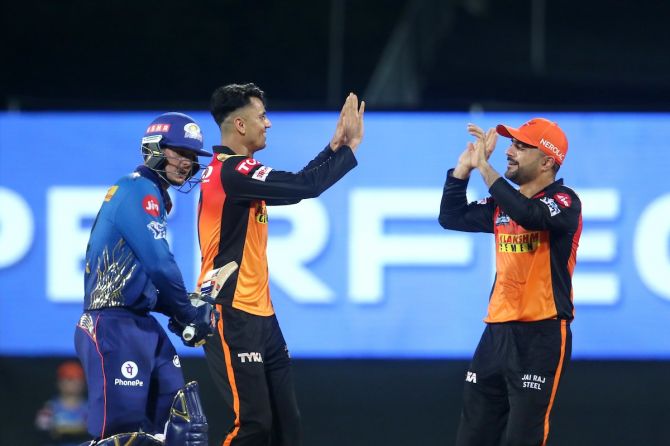 Afghanistan off-spinner Mujeeb-ur Rahaman returned to the attack in the 14th over and struck with his fifth delivery.

Cramped for room, De Kock went to the leg side and hoicked the ball in the air. Substitute J Suchit, at deep mid-wicket, made no mistake with the offering.

The SunRisers did well to check Mumbai Indians’s scoring as they were going at over eight runs an over before Shankar’s twin strike of Rohit and Suryakumar. The onus was on Ishan Kishan and Kieron Pollard to boost the total. However, Mujeeb struck again, this time having Kishan caught by Jonny Bairstow for just 12 off 21 balls.

It could have soon been another one down, but Shankar dropped Pollard off the third delivery of the 19th over, bowled by Khaleel Ahmed.

But Ahmed tasted success off the next delivery, having Hardik Pandya caught by Virat Singh in the deep for 7 off 5 balls.

Pollard then made the most of the ‘life’ in the 19th over, hitting Bhuvneshwar for two sixes in the last over.

Bhuvneshwar conceded 17 runs from the over as Pollard finished with 35 off 22 balls, including one four and three sixes, as Mumbai Indians posted 150 for 5 in their 20 overs.