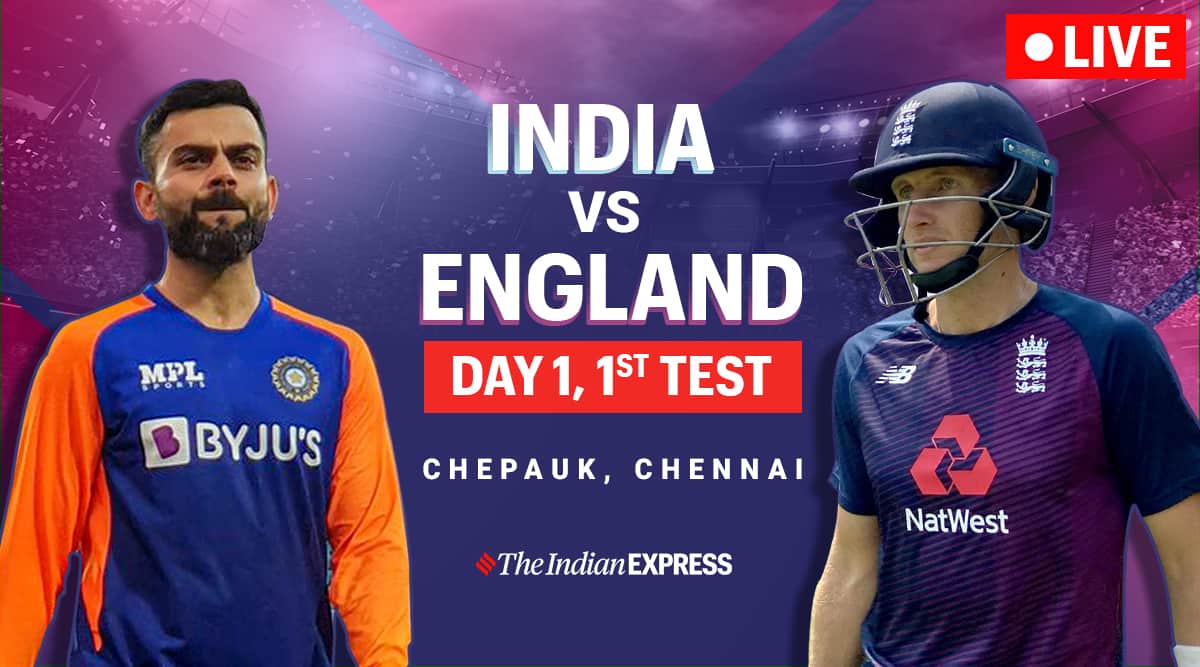 India vs England (IND vs ENG) 1st Test Day 1 Live Cricket Score Online Updates: Opting to bat, England were taken across 200 of the first day of the opening Test against India on Friday as Joe Root scored a century. Dominic Sibley and Root are in the middle with an unbeaten partnership between them so far.

The India-England cricket series starting on Friday in Chennai marks the first international sport in India since the onset of the coronavirus pandemic.

India is coming off a remarkable comeback series win in Australia with a depleted squad, and will have back captain Virat Kohli after a six-week paternity leave. Kohli amassed 655 runs in five Tests against England when it last visited in 2016-17, leading India to a 4-0 win. A 2-1 or better win would put India in the inaugural world Test championship final against New Zealand in England in June. England need a 3-0 win to stand a chance of making the final.

Live: England won the toss and elected to bat.

Ishant comes back into the attack as India do take the second new ball in the 82nd over. Makes no difference to Root, who reaches out for a drive and creams Ishant through the covers for four.

Root finds even more fluency after crossing the three digit mark. India get to 80 overs but do not take the second new ball. Sibley gets four leg byes going down leg. There is a defeated air about how India are going about things in this final session.

Sibley now rocks back and gets four with a powerful sweep off Sundar, with the runs keeping on coming thick and fast. Another four for Sibley square off the wicket against Nadeem. Root moves to 99 with a push down the ground. Sibley gets another boundary, before Root gets to his century with another single! Off 164 balls. His 20th Test ton in his 100th Test.

Joe Root has now hit a century in 3 successive Tests, only Ken Barrington has managed a longer run for England (4 in a row on two occasions).

Root moves into his 90s with a flick for four against Sundar. England’s 200 comes up, with this partnership tiring out the Indians towards the end of this first day. Can the second new ball bring some luck for India?

Again, Root brings out a massive sweep against Nadeem. Four more! Pant’s signals from behind the stumps beginning to sound more and more desperate. India are sticking with their backup spinners and England are continuing to build their innings against them.

Again, Root brings out a massive sweep against Nadeem. Four more! Pant’s signals from behind the stumps beginning to sound more and more desperate. India are sticking with their backup spinners and England are continuing to build their innings against them.

Sundar is brought back into the attack. Root sweeps his first ball for a four. Ashwin seen having frequent discussions with Sundar and Nadeem, both of whom England have taken a liking to.

A fabulous cover drive for four from Root off Bumrah brings up the 100 partnership. Root moves into his 60s, catching up with Sibley’s score though he has played at lest 80less balls.

Sibley rocks back and cuts a short ball from Nadeem for another boundary. The pressure from the other end keeps being released from Nadeem’s end.

Root is continuing from his Sri Lanka conquest in this Test, but what a run he has had in India over the years! He has played seven Tests in India. He’s passed 50 in every single one of them.

Ishant and Shahbaz Nadeem resume bowling for India after the break. Joe Root gets to his fifty! Cracks a short ball from the left arm spinner to get to the mark. Root’s golden run in Asia is continuing. Can he mark his 100th Test with a hundred?

Sibley and Root have turned things around for the visitors after they lost two in quick succession. After spending 31 overs together, the England pair have partnered each other for 77 runs. Ashwin ends the second session with England on 140/2 after 57 overs.

Dominic Sibley, who opened the innings with Rory Burns, has shown enough patience with the bat as the right-hander reached his 50* in 163 balls. On the other side, skipper Root continues to be a firm anchor of the England innings.

Shahbaz Nadeem to Joe Root and the sweep from outside off stump, no one there at mid-wicket, Root connected that really well and it’s another boundary. Joe Root’s magnificence in Sri Lanka was centred around one of the finest shots in world cricket today. In the two Tests in Sri Lanka, Root scored 134 of his 426 runs with his sweep.

With Dominic Sibley’s overstepping off Shahbaz Nadeem’s ball, England reached the 100-run mark. Their 100 runs came off first 44 overs with Sibley reached 39 off 137 balls and skipper Joe Root 22 off 68 balls. The pair is trying hard to accumulated some runs here as it has been a 2.28 CRR so far.

The partnership (27 off 92 balls) between Dominic Sibley and Joe Root has been the biggest hope for England as both are taking their time. Sibley has scored 35 off 128 balls and Root has taken 54 balls for his 12 runs so far.

Joe Root, who made in his Test debut in Nagpur in 2012, also played his 50th and 100th Test in India. One amongst the fab four of international cricket, Root has scored 8249 runs so far. The 30-year-old cricketer is the third youngest cricketer to play 100 Tests after Alastair Cook and Sachin Tendulkar.

With no help from the ball for seamers and spinners so far at the Chepauk wicket, Indian bowlers are eyeing another wicket after Lunch. Dominic Sibley and Joe Root are at the middle rebuilding the innings.

The India-England Test series that starts today is being played with a modified ball. According to BCCI’s official suppliers Sanspareils Greenlands (SG), the new ball will have a pronounced seam, harder core and will be of a darker shade of red. Here’s explaining the reason for the change and how it will help India’s bowlers, especially spinners. [Read More]

Indian bowlers managed to take two wickets in just 14 minutes to the Day 1 Lunch at Chepauk. First R Ashwin provided the team with a breakthrough followed by Jasprit Bumrah’s wicket of Lawrence. England camp must be taking lunch with some worries in mind, while Indians would take the field with so much confidence.