India vs England (IND vs ENG) 1st ODI Live Cricket Score: England captain Eoin Morgan won the toss and opted to field against India in the first ODI of the three-match series in Pune on Tuesday.

India handed ODI debuts to Krunal Pandya and Prasidh Krishna, while spinner Kuldeep Yadav also made a comeback to the playing XI. For England, Sam Billings, Tom Curran and Moeen Ali are back in the XI.

The series is particularly important for the 35-year-old Shikhar Dhawan, who failed to make an impact in the first T20 in Ahmedabad before warming the benches the remaining two games which India won.

For the Indian team, the series would be an extension of its preparations for the T20 World Cup later this year. The 50-over-format, in general, remains low priority in 2021 with no major tournaments around the corner.

Live: England won the toss and elected to bowl.

The new ball which is just 16-ball-old has been changed due to some issues with it. Perhaps it’s hit a divot or a protrusion close to the boards when Dhawan played that shot? Or did Wood bang it too hard into the pitch?

In absence of Jofra Archer and Chris Jordan, England handed the ball to all-rounder Sam Curran in the second over of the innings. Both Rohit Sharma and Shikhar Dhawan have been watchful in the first two overs.

‘Very happy to bat first, we had different plans. Weather is going to drastically change in the evening. It’s a great opportunity for us to put runs on the board. The last game we played here against England is a great memory. If we believe we are a top side we should be ready to do anything, whether we decide or asked to do something. KL will bat at 5 and keep. Top four are Rohit, Shikhar, myself and Sheryas. Hardik bats at 6, Krunal at 7. Shardul 8, Bhuvi at 9, Prasidh and Kuldeep complete.’

Toss winning skipper Morgan says: Looks a good wicket, a bit more grass than we expected. It’s a good challenge we are looking forward to. Sam Billings, Tom Curran and Moeen Ali are back. And we are bowling. 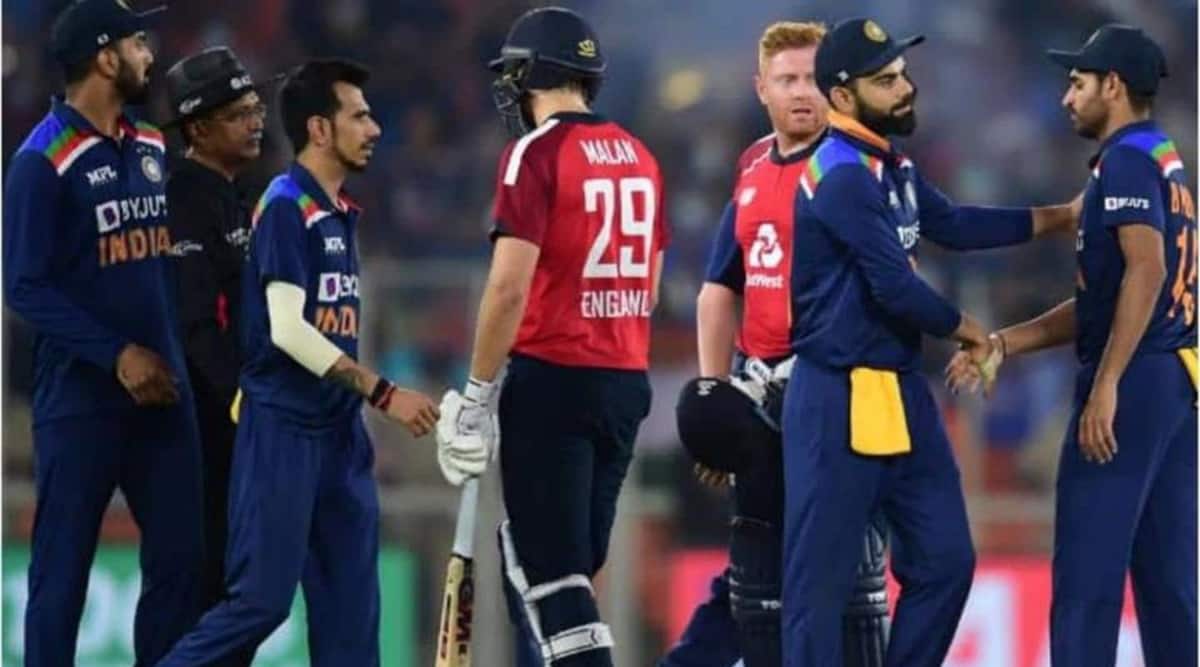 A lot has been at stake during England’s tour of India. The riveting T20I series served as an audition for the World Cup scheduled later in the year. Prior to that, the four-match Test series decided who will face New Zealand in the World Test Championship final. But the three-match ODI series to be held behind closed doors in Pune at the fag end of the sojourn offers little context and relevance, with back-to-back T20 World Cups pencilled in before the next 50-over showpiece event in 2023. [Read More]

Krunal Pandya and Prasidh Krishna have been handed their caps. Looked like Hardik gave the cap to Krunal.

“A very good pitch for batting, looks a beauty and there’s an even covering of grass,” observes Ajit Agarkar.

So after the T20 series, India and England lock horns in the 50-over format. Fast bowler M Prasidh Krishna, spin-bowling all-rounder Krunal Pandya and top-order batsman Suryakumar Yadav received maiden call-ups to India’s one-day squad on Friday for their three-match series against England, which begins next week. One stat which works in favour of the home team is that India have beaten England in their last 5 bilateral men’s ODI series at home.