Here's a tale that will be part of McIlroy family lore for probably forever: Gerry McIlroy was standing near the right side of the green, watching his son play his second shot from off to the left of the fairway on Thursday. The ball wound up hitting Gerry McIlroy in the left leg. Rory McIlroy hit his approach on the seventh hole at the Masters right where he was aiming.

Problem was, he was aiming at his father.

Here’s a tale that will be part of McIlroy family lore for probably forever: Gerry McIlroy was standing near the right side of the green, watching his son play his second shot from off to the left of the fairway on Thursday. The ball wound up hitting Gerry McIlroy in the left leg.

“It was a perfect shot,” Rory McIlroy said.

Well, kind of. He wound up making bogey, which was his third consecutive one at that point.

“It was dead straight,” Rory McIlroy said. “But I think he was OK. He didn’t limp away. He walked away pretty swiftly, so that was all right.”

Gerry McIlroy is a pretty good golfer himself. He introduced his son to the game long ago, and has developed quite a following among his fellow members at his home course, Seminole Golf Club in Florida.

He’ll be getting mileage off this story for years.

Rory McIlroy also had a tee shot spray right on the par-4 11th, causing some patrons to tap-dance out of the way. He finished with a 4-over 76, not exactly boosting his chances of finally winning a Masters and completing the career grand slam.

There’s a tradition of sorts in golf that when someone gets struck by an errant ball, the golfer signs a glove and presents it to the person as a part-apology, part-souvenir. McIlroy didn’t seem like he was planning to give one to his dad.

“I think he just needs to go and put some ice on,” he said. “Maybe I’ll autograph a bag of frozen peas for him.”

Tommy Fleetwood had no birdies in the opening round of the Masters.

A hole-in-one made him smile anyway. Fleetwood finished the day with four bogeys, the ace and shot a 2-over 74. There were no aces at the Masters last year; Justin Thomas and Bryson DeChambeau both made one at the 16th in 2019.

On a day when it was tough enough to go low, Abraham Ancer’s scorecard took another blow after he completed his round.

Augusta National officials ruled that Ancer unknowingly touched the sand with his club before taking his third stroke from a greenside bunker at the par-5 15th hole. 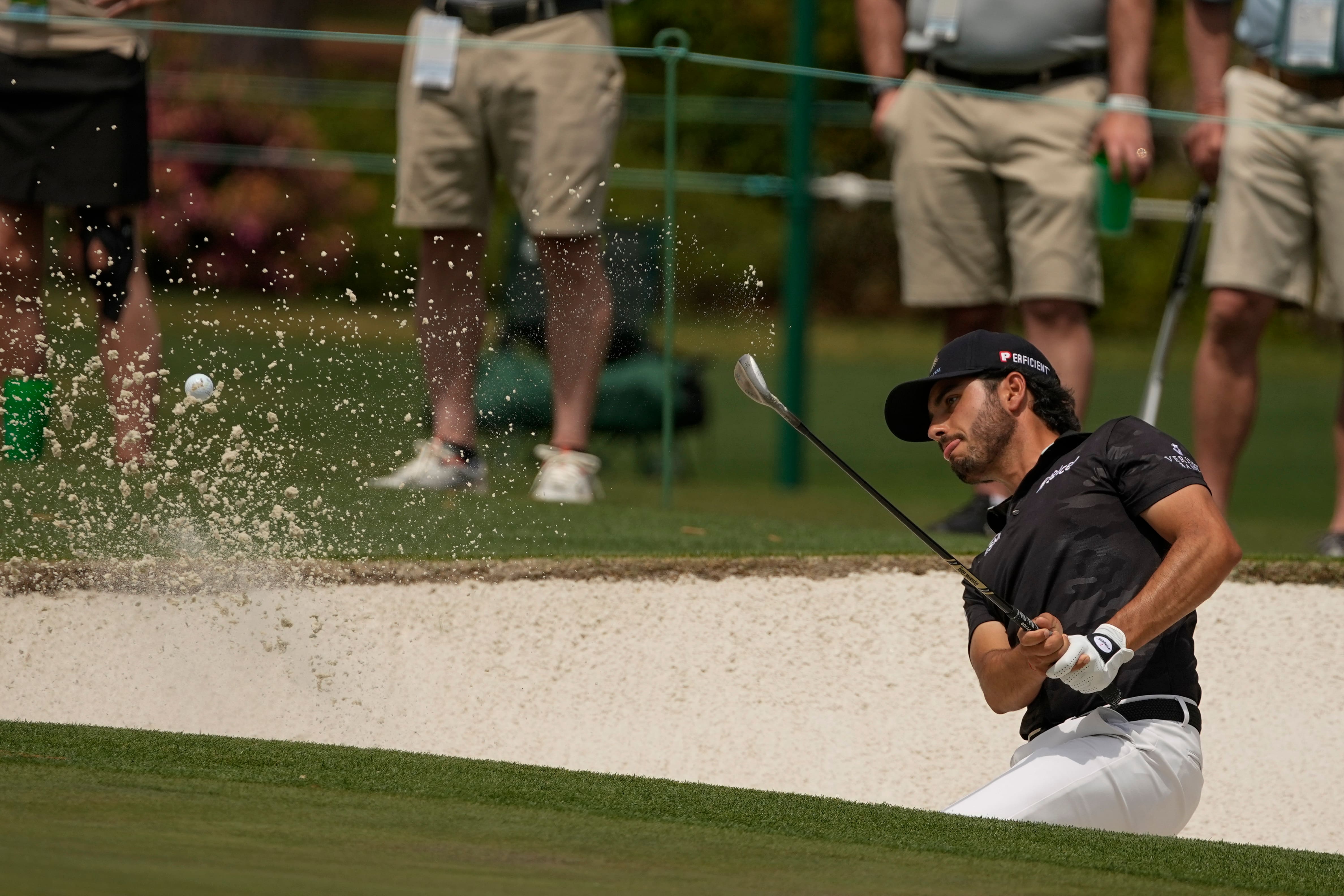 Ancer was assessed a two-stroke penalty, bumping his score on the hole from a 6 to a triple-bogey 8. His overall score increased to 3-over 75, leaving him 10 shots behind leader Justin Rose.

Ancer tweeted that while he was “gutted, I can’t wait to get after it tomorrow.” Ancer had already signed his scorecard and exited the scoring area when the committee reviewed video evidence of the incident.

Because the club touching the sand was deemed visible to the naked eye, officials decided to assess the penalty. If that had not been the case, the video evidence would have been disregarded.

Jordan Spieth hit a tee shot into the trees, hit an approach off another tree, and three-putted from inside of 10 feet.
Lucky for him, all those miscues came on the same hole. Spieth had a triple-bogey 7 on No. 9 Thursday, after spraying his tee shot into some trees, clunking his recovery try off another tree, eventually missing a bogey putt that just wouldn’t stop as it trickled past the hole � and, of course, missing the 5-footer that would have saved double as well.

The 2015 Masters champion shook it off quickly, made birdie on the next hole to get back on track and shot a 1-under 71.

LAST SHALL BE FIRST

Brian Harman was the last player to get into the Masters. When he finished his opening round, his was the first name on the leaderboard.

Harman made three birdies over the last six holes for a 3-under 69. That matches his best score at Augusta National, though it’s a small sample size. This is only Harman’s third appearance in the Masters.

He had little reason to be believe he would be here in April.

Only a month ago, Harman was at No. 95 in the world ranking. He tied for third at The Players Championship, and that got him into the Match Play. The Match Play was the final tournament for players to crack the top 50, and

Harman reached the quarterfinals. That got him to No. 49, and he was on his way to the Masters.
Being a late entry had its advantages.

“Probably so,” Harman said. “The previous two times I’ve played it, I’ve certainly looked forward to it maybe and prepared too much for it. I just kind of came in here, and I know the course pretty well. I’ve played here bunches of time. I love it around here. It’s just a matter of having my game ready.”

Based on what got him here, he was ready. Harman said his short game has been on song, and that never hurts at Augusta National.

When Lee Elder, the first Black player to play in the Masters, went to the tee for the honorary starter ceremony with Jack Nicklaus and Gary Player on Thursday morning, there were about 100 people wearing green caps with “1975” written in white across the front.