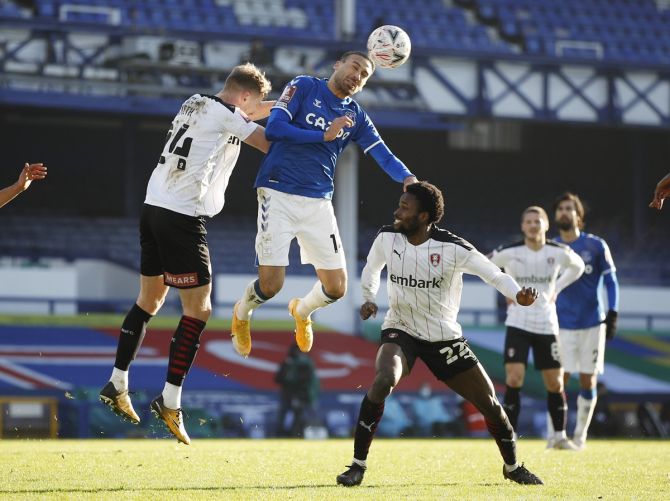 Everton’s Abdoulaye Doucoure scored an extra-time winner as they edged Rotherham United 2-1 in an absorbing FA Cup third round tie on Saturday, while sixth-tier side Chorley beat a Derby County team weakened by their COVID-19 outbreak.

After 90 minutes the score at Goodison Park was level at 1-1 with Cenk Tosun’s first Everton goal since Nov. 2019 cancelled out by a 56th minute strike from lowly Championship (second-tier) side Rotherham’s American right back Matthew Olosunde.

But three minutes into extra time the Premier League side got the decisive goal when substitute Doucoure latched onto Colombia playmaker James Rodriguez’s precise through ball before sliding it past helpless goalkeeper Jamal Blackman.

With five-time FA Cup winners Everton resting top scorer Dominic Calvert-Lewin and Brazilian forward Richarlison, Turkish international Tosun was handed a rare opportunity to lead the attack and got on the scoresheet inside 10 minutes.

The visitors responded with a string of chances and were rewarded 10 minutes into the second half when Olosunde swivelled in the box before slotting the ball past keeper Robin Olsen.

Everton thought they had grabbed the winner near the end of normal time when Tosun struck in the 86th but his effort was ruled offside by VAR and it was left for Frenchman Doucoure to secure a spot in the fourth round with his extra-time strike.

In the absence of first-team players and interim manager Wayne Rooney, a youthful Derby County side were defeated 2-0 at National League North outfit Chorley.

The COVID-19 outbreak at Derby meant nine of the starting 11 were making debuts and the visitors fell behind when Connor Hall put Chorley ahead in the first half before Mike Calveley added a second in the 84th to secure a maiden fourth round berth.

Luton Town beat Reading 1-0 in another all-Championship clash to reach the fourth round for the first time since the 2012-13 season thanks to midfielder George Moncur. 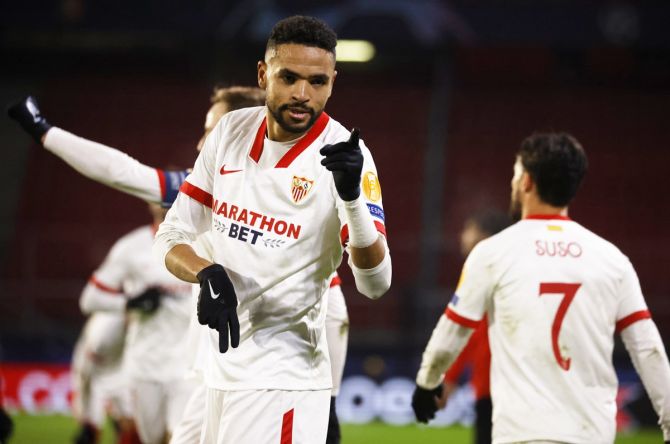 Sevilla forward Youssef En-Nesyri scored a hat-trick as they beat visitors Real Sociedad 3-2 in a La Liga thriller after a chaotic start saw four goals in 10 minutes on Saturday.

Moroccan En-Nesyri nudged a low cross from Fernando into the net after four minutes but less than 60 seconds later Sociedad levelled thanks to a remarkable own goal from Sevilla defender Diego Carlos, who lobbed goalkeeper Bono from outside the area as he tried to prevent Alexander Isak reaching the ball.

En-Nesyri restored Sevilla’s lead moments later with an impressive solo run and powerful finish but Swedish forward Isak levelled in the 14th, sticking a leg out to score from a corner.

En-Nesyri completed his treble in the first minute of the second half, pouncing at the far post after Lucas Ocampos had carved his way through the visiting defence.

The Moroccan became only the second player to score a hat-trick in La Liga so far this season and the first in open play. Valencia’s Carlos Soler scored a treble of penalties against Real Madrid in November.

The win took Sevilla into sixth on 30 points from 16 games, level with Sociedad in fifth and with three matches in hand.

The rate of goals began to slow after Isak’s strike but the action did not and visiting keeper Alex Remiro had to tip away shots from En-Nesyri and Joan Jordan while his opposite number Bono thwarted Cristian Portu.

When the halftime whistle arrived, 13 shots had been fired at goal, seven on target.

The second half was no less explosive. Suso almost stretched Sevilla’s lead soon after En-Nesyri’s third goal when he burst through on the counter but Remiro turned his shot round the post.

Sociedad could then have equalised when Mikel Merino headed at goal but defender Jules Kounde cleared the ball off the line.