Liverpool maintained their new-found momentum as Darwin Nunez scored the only goal in a 1-0 victory over West Ham United in the Premier League, but high-flying Tottenham Hotspur suffered a reality check with a 2-0 loss at Manchester United on Wednesday.

Chelsea’s run of four successive league wins came to an end as they were held to a 0-0 draw at Brentford.

Impressive Newcastle United bolstered their place in the top-six with a 1-0 victory at home to struggling Everton.

Southampton eased some pressure on manager Ralph Hasenhuttl with a 1-0 win against south coast rivals Bournemouth to climb out of the relegation zone.

Liverpool’s 1-0 win over champions Manchester City at the weekend looked like lift-off for their stuttering season but they were made to work extra hard by West Ham.

In the end they were thankful for summer signing Nunez’s first Anfield goal for the club, a superb downward header in the 22nd minute from a cross by Kostas Tsimikas.

Nunez also rattled the post with a ferocious shot but West Ham could easily have taken a point.

Jarrod Bowen’s penalty was saved by Alisson just before halftime while Tomas Soucek and Said Benrahma both had great opportunities for the visitors late on.

Liverpool moved up to seventh with 16 points from 10 games, two points behind Newcastle and three behind Manchester United.

“I don’t stand here thinking it should be an easy game for us, but we got the result and I think we deserved the result,” Liverpool manager Juergen Klopp, who was red-carded during the win over City, said. “Luck hasn’t always been on our side but maybe today we had it, or Ali, however you want to look at it.

“It is three points more, massive.” 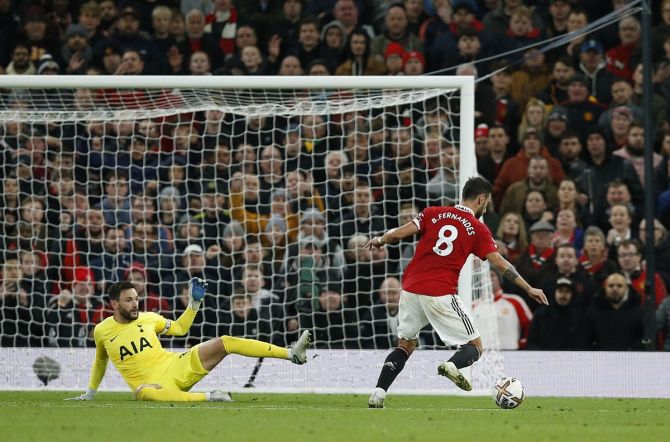 After a difficult start Man Utd are slowly taking shape under Dutch manager Erik ten Hag and they added Tottenham to their wins already against Liverpool and leaders Arsenal.

But for a clutch of superb saves by keeper Hugo Lloris, United would have won by more as Tottenham squandered the chance to move into second place with a dismal display.

United rained in 18 shots on the Spurs goal in the first half without scoring, but eventually went in front when Fred’s side-footed shot deflected past Lloris in the 47th minute.

The Reds kept up the pressure and deservedly put the game to bed in the 69th minute when Bruno Fernandes powered a strike into the net after another excellent flowing move.

Newcastle, who have lost only once all season and are beginning to look like contenders for a European place, edged out Everton with a goal by Miguel Almiron.

The Paraguay international curled a shot from the edge of the box into the top corner just past the half-hour mark to condemn Everton to a third consecutive defeat.

Chelsea kept a fifth clean sheet in succession in all competitions but Graham Potter’s side could find no way past Brentford who enjoyed the better of the chances in the west London derby.

They remain fourth in the standings on 20 points, three behind Tottenham with a game in hand, but already starting to drift off the pace set at the top and facing what is already looking like a tense battle for a Champions League spot.

“They had some chances, we had some, we finished the game stronger, but it was a hard-earned point against a team who make it difficult for you,” Potter, still unbeaten after replacing Thomas Tuchel in early September, said.

Che Adams’s first-half header earned Southampton victory at Bournemouth — their first win in six games moving them up to 14th place with 11 points. Chelsea’s four-game Premier League winning run petered out in a tame goalless draw at Brentford as the home side looked the more enterprising for much of a night that failed to live up to its west London derby expectations.

Brentford’s fans, still getting used to watching their team take on the heavyweights of the Premier League, initially seemed unsure how to greet the result, before eventually realising it was an excellent point and applauding their men.

For Chelsea it was a disappointing night, not just for the dropped points but for a generally low-key display desperately short of pattern or cutting edge ideas.

They remain fourth in the standings on 20 points but already starting to drift off the pace set at the top and facing what is already looking like a tense battle for a Champions League spot.

Brentford remain solidly mid-table on 14 points and though they never looked like matching their shock 4-1 win at Stamford Bridge at the end of last season, they stood toe to toe with their big-money rivals and created the better chances with their usual confident, crisp passing.

The first two of them fell to striker Ivan Toney, with eight goals to his name already this season, but goalkeeper Kepa Arrizabalaga tipped both of his headers over the bar.

If Chelsea striker Armando Broja had displayed the commitment Toney has been showing this year he would probably have got his head to Cesar Azpilicueta’s tempting cross, while the full back forced David Raya to stretch and keep out his skidding low shot in the best of a thin attacking show by the visitors in the first half.

Five minutes after the break an unmarked Bryan Mbeumo mistimed a header, the ball looping tamely to Kepa, in what would turn out to be the best chance of the match.

With Chelsea making no inroads at all, manager Graham Potter threw on three substitutes, including Raheem Sterling, though not Pierre-Emerick Aubameyang.

It changed little, however, as Chelsea prodded and probed without carving out any clear opportunities, too often playing one pass too many in the search for the perfect chance when their fans were baying for someone to let fly.

Aubameyang eventually joined the fray for the last 10 minutes and though he and fellow subs Christian Pulisic and Carney Chukwuemeka did at least keep Raya on his toes in a late relative flurry, it never really felt as if a goal was coming.

“In the first half, we were by far the better team so, I think we deserved the win,” said Brentford boss Thomas Frank. “But we did look tired from the 84th minute after putting a lot of effort in. I think we were fantastic.”

Potter said he thought the draw was a fair result. “They had some chances, we had some, we finished the game stronger, but it was a hard-earned point against a team who make it difficult for you,” said the manager, still unbeaten after replacing Thomas Tuchel in early September.

“They put it into the box, set pieces, long balls, you have to defend that well and I think we did that, though we needed Kepa a couple of times.

“The substitutes made an impact so that was good and I think that’s been a theme of my time here – everyone wants to play and when they come on they give everything.”

Chelsea will hope to rediscover their verve at home to Manchester United on Saturday, while Brentford travel to Aston Villa on Sunday.