Images from the English Premier League matches played on Sunday. 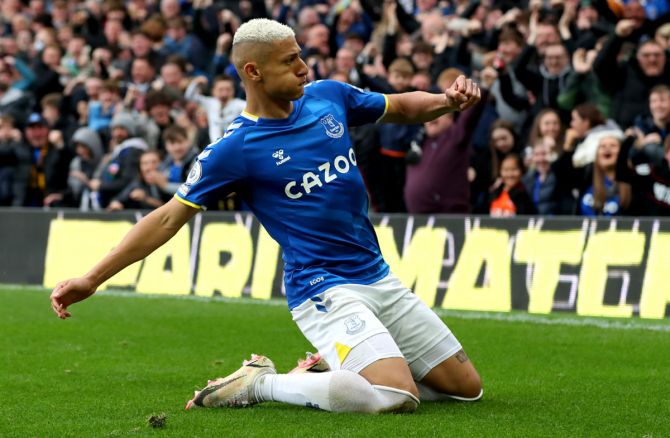 Striker Richarlison profited from a Chelsea error to secure struggling Everton a 1-0 Premier League win and what could be a precious three points in their bid to avoid relegation at a rocking Goodison Park on Sunday.

The home side grabbed the lead a minute into the second half after Cesar Azpilicueta gave up possession under pressure from the Brazilian forward, who harried the Chelsea captain into a mistake before slotting a low shot past goalkeeper Edouard Mendy.

Chelsea dominated possession and Everton had to hold on grimly for the final half-hour. They stay in the relegation zone, but move to within two points of Burnley and Leeds United with a game in hand.

Chelsea remain third with 66 points from 34 games as they bid to qualify for the Champions League. They are six points ahead of fifth-placed Arsenal, but have now played a game more. Son Heung-min continued his prolific season, striking twice after Harry Kane had opened the scoring as Tottenham Hotspur beat Leicester City 3-1 at home on Sunday to boost their hopes of Champions League qualification.

The win moved Spurs a point above North London rivals Arsenal into fourth place in the Premier League, at least for a few hours, with the Gunners at West Ham United later on Sunday.

“Despite making eight changes the Leicester team was good and strong so for this reason we have to be delighted we got three points,” said Spurs boss Antonio Conte.

“No one could have imagined when I arrived in November we could be in the (Champions League) race still, but these players are deserving to fight for such an important place. It is not easy to qualify for the Champions League in England.”

Son has now scored 19 league goals this season, three fewer than top scorer Mohamed Salah of Liverpool, and the South Korean’s second goal was certainly one of his finest.

Patson Daka had given Spurs an early fright when he hit the post in the 14th minute but eight minutes later Kane put the hosts in front, losing his marker to meet a Son corner with a powerful header.

“Defending corners has been a problem for us all season — we lack aggression… it was so disappointing. It is something we will have to look at in the summer. The mentality to head the ball is missing,” he said.

Spurs were comfortably in charge of the game but it was not until the introduction of Dejan Kulusevski from the bench in the 55th minute that they drove home their superiority.

After a fine, sliding tackle from Cristian Romero won back the ball for Spurs, Kulusevski set up Son with a short ball into the box and the South Korean was given enough space to rotate and drill his finish into the bottom corner.

Then Swedish winger Kulusevski was the provider again, cutting in from the right and feeding Son who opened up and beat Kasper Schmeichel with a wonderful curling shot into the far, top corner.

Son received a thunderous standing ovation from the 59,000 crowd when he was substituted, three minutes after his goal.

Leicester received some reward for their efforts when Kelechi Iheanacho scored in stoppage time with a low drive off the inside of the post.

Son dismissed talk of him winning the Golden Boot but had clearly enjoyed his second goal.