The win means Chelsea have won three European titles in seven years, with the Champions League triumph in 2012 followed by their first Europa League victory in 2013. 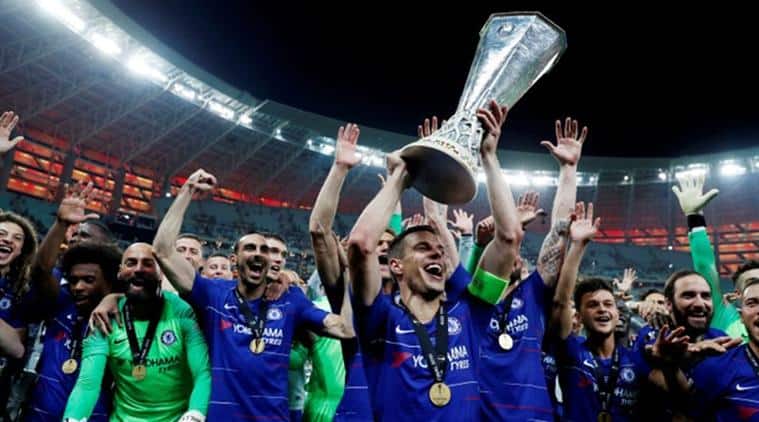 Chelsea hammered their London rivals Arsenal 4-1 to win the Europa League thanks to two goals from Eden Hazard, probably making his last appearance for the Blues, and one apiece for Olivier Giroud and Pedro.

Chelsea destroyed Arsenal with four second-half goals that handed coach Maurizio Sarri his first major trophy although even that might not be enough to silence the speculation that he could also be leaving Stamford Bridge imminently.

After a tepid first half, former Arsenal hero Giroud put Chelsea ahead in the 49th minute with an angled header and the Blues doubled their lead 10 minutes later when Pedro diverted a cross from Hazard beyond Petr Cech.

With Arsenal on the ropes, defender Ainsley Maitland-Niles collided with Giroud to concede a penalty that Hazard stroked home after 65 minutes. Alex Iwobi clawed a goal back for Arsenal but Chelsea restored their three-goal cushion in the 72nd minute when Hazard swapped passes with Giroud to score his second.

The win means Chelsea have won three European titles in seven years, with the Champions League triumph in 2012 followed by their first Europa League victory in 2013.

By contrast, Arsenal have lost five of their six major European finals, with their only victory coming in the 1994 Cup Winners’ Cup against Parma.

Hazard was given an ovation by Chelsea fans when he was substituted in the closing minutes and he looked emotional as he held his hands over his eyes. The Belgium winger has signalled he wants to move to Real Madrid in the close season.

“My dream was to play in the Premier League and I did it for seven years,” Hazard, who joined Chelsea in 2012, told a television reporter shortly after the final whistle. “Maybe I think it is time to say goodbye.

“We will decide in a few days and the only target in my mind was to win this final. I have made my decision already and now I’m waiting on both clubs. I think it is a goodbye, but in football you never know.”